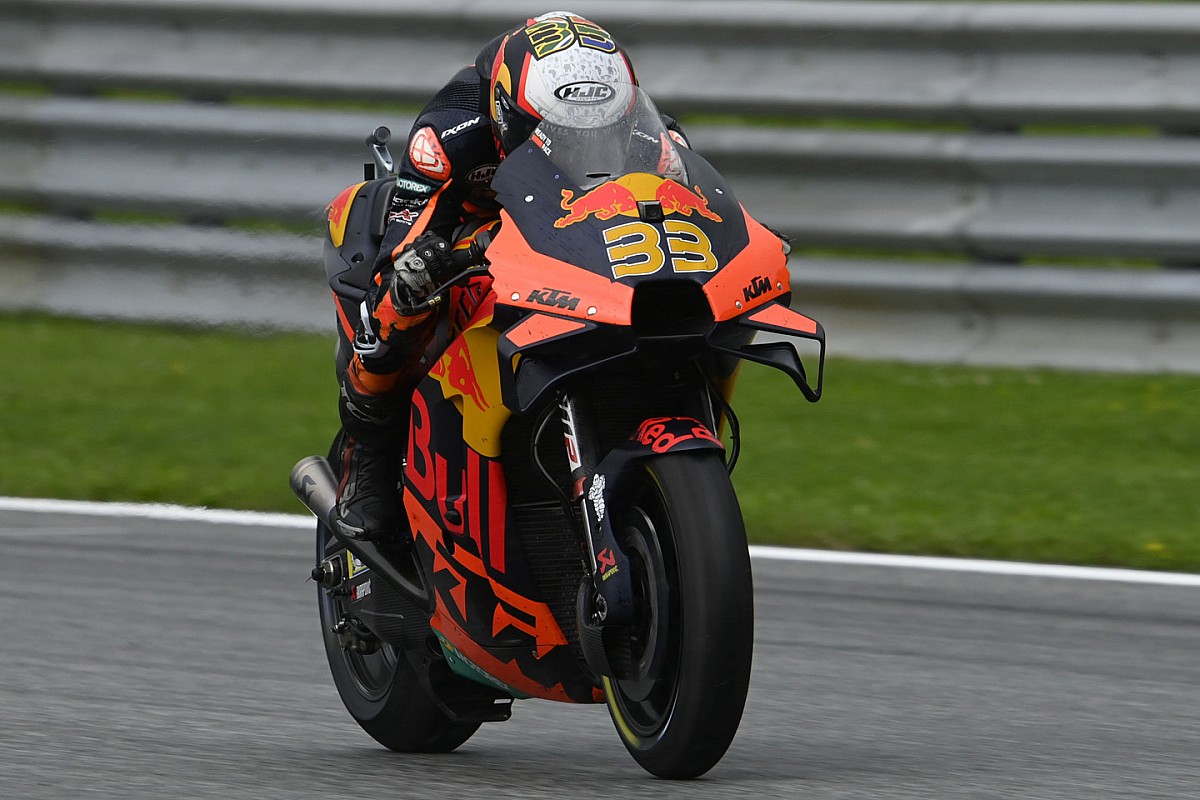 Spots of rain started to fall on the Red Bull Ring as the race got underway having been declared dry, which influenced Marc Marquez’s decision to make a late switch to the soft rear slick in anticipation of a flag-to-flag scenario.

Styrian GP winner Jorge Martin converted pole to the holeshot, while Fabio Quartararo almost highsided out of second at Turn 1.

Ducati’s Francesco Bagnaia found his way into the lead ahead of Martin, while the Pramac rider and Quartararo touched at Turn 6 fighting for second – the Yamaha rider losing out to Johann Zarco, Marc Marquez and Jack Miller.

The battle behind raged as Bagnaia continued to lead for the first five laps.

Martin went for a move on Bagnaia at Turn 7 on the sixth tour, but ran wide and allowed his factory Ducati counterpart back through as well as Marquez and a regrouped Quartararo.

By lap eight, the rain flags were waving, but the track didn’t get wet enough at this stage to warrant a bike swap. 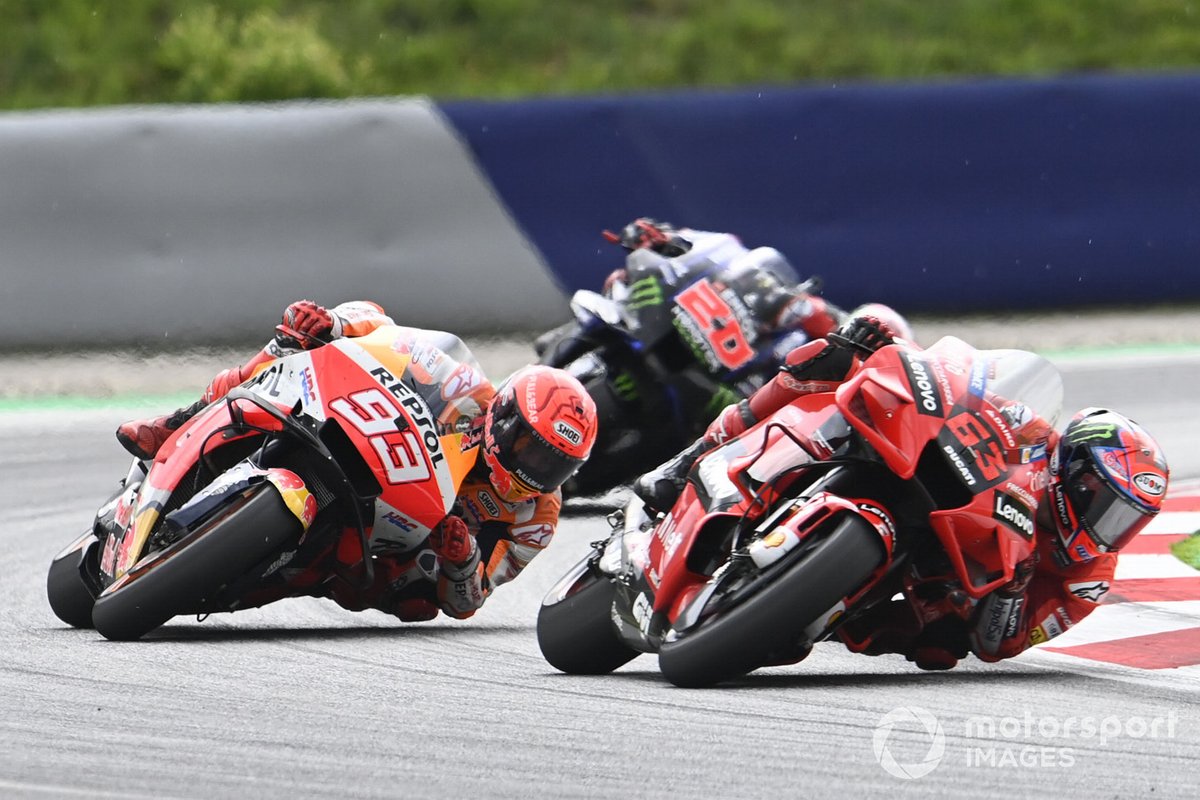 At Turn 6 on the same lap, Quartararo found a way up the inside of Bagnaia to take the lead on the Yamaha and resisted as the Ducati rider tried to retaliate at the Turn 7 left-hander.

Bagnaia then used the power of the Ducati to surge past Quartararo into Turn 1, with the Yamaha rider running wide and allowing Bagnaia to open up a gap of half a second as Marquez hounded Quartararo for second.

After 15 laps, the top three of Bagnaia, Quartararo and Marquez had opened up a gap of over a second to Martin behind, with both Pramac riders struggling to run the pace of the leaders.

Despite being the only rider on the soft rear tyre, Marquez showed no signs of his rubber fading and pressured Quartararo into a mistake on lap 20 – the Yamaha rider braking too deep into Turn 3 trying to keep the Honda behind him.

Marquez then set about closing down Bagnaia as the rain started to intensify on lap 22 of 28, Marquez moving through at Turn 3.

The pace started to drop dramatically as the track got wetter, allowing Martin to close right back into contention along with the Suzuki of Joan Mir and KTM’s Binder. 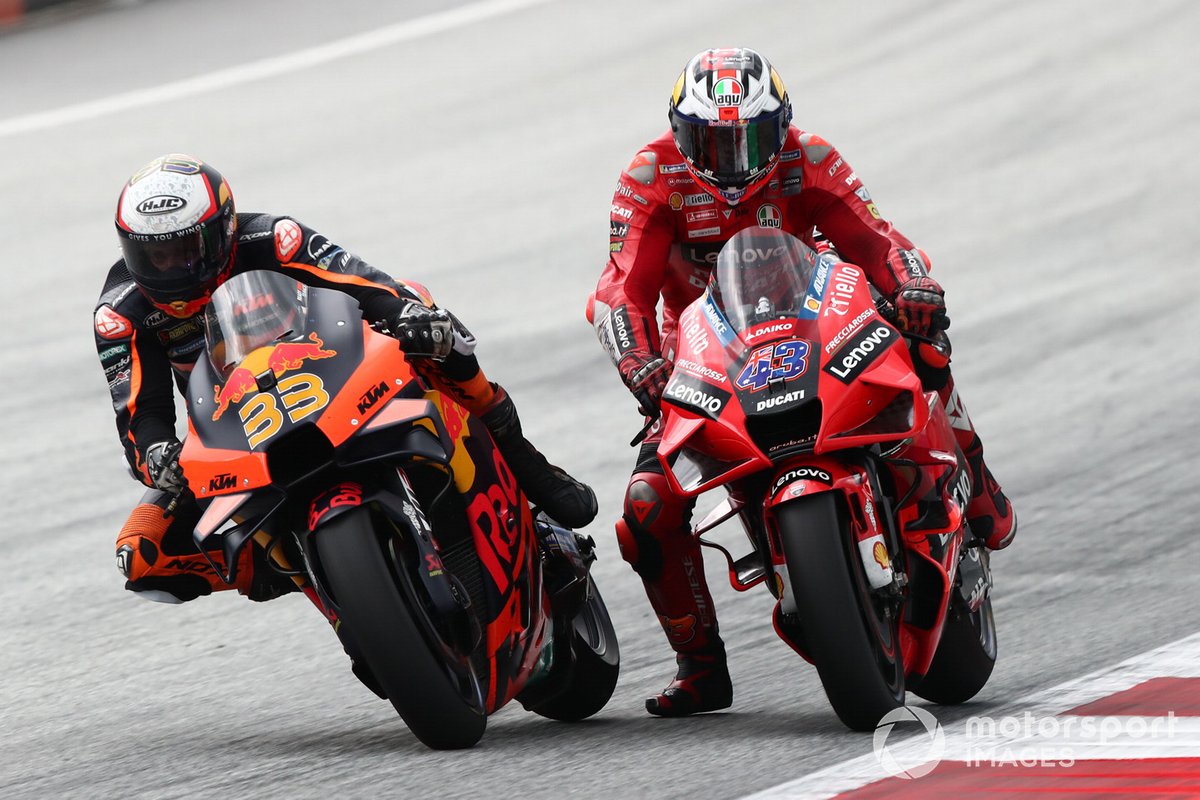 Miller and Alex Rins on the sister Suzuki were the first to pit for wets at the end of lap 23, while the leaders all bunched up over the next two laps.

On the 25th tour, race leader Marquez, Quartararo, Bagnaia, Mir and Martin all boxed for their wet bikes as Binder elected to stay out on slicks.

The KTM riders was virtually crawling around the Red Bull Ring come the final lap, Binder struggling to keep his RC16 in a straight line as he applied the throttle.

But Binder somehow kept his bike upright to take the chequered flag over 12 seconds clear for a sensational second-career MotoGP victory – though was hit with a three-second penalty post-race for a track limits violation.

But the riders who’d pitted for wets on lap 25 were charging through the field, with Bagnaia and Martin picking their way through the slick runners to claim second and third. 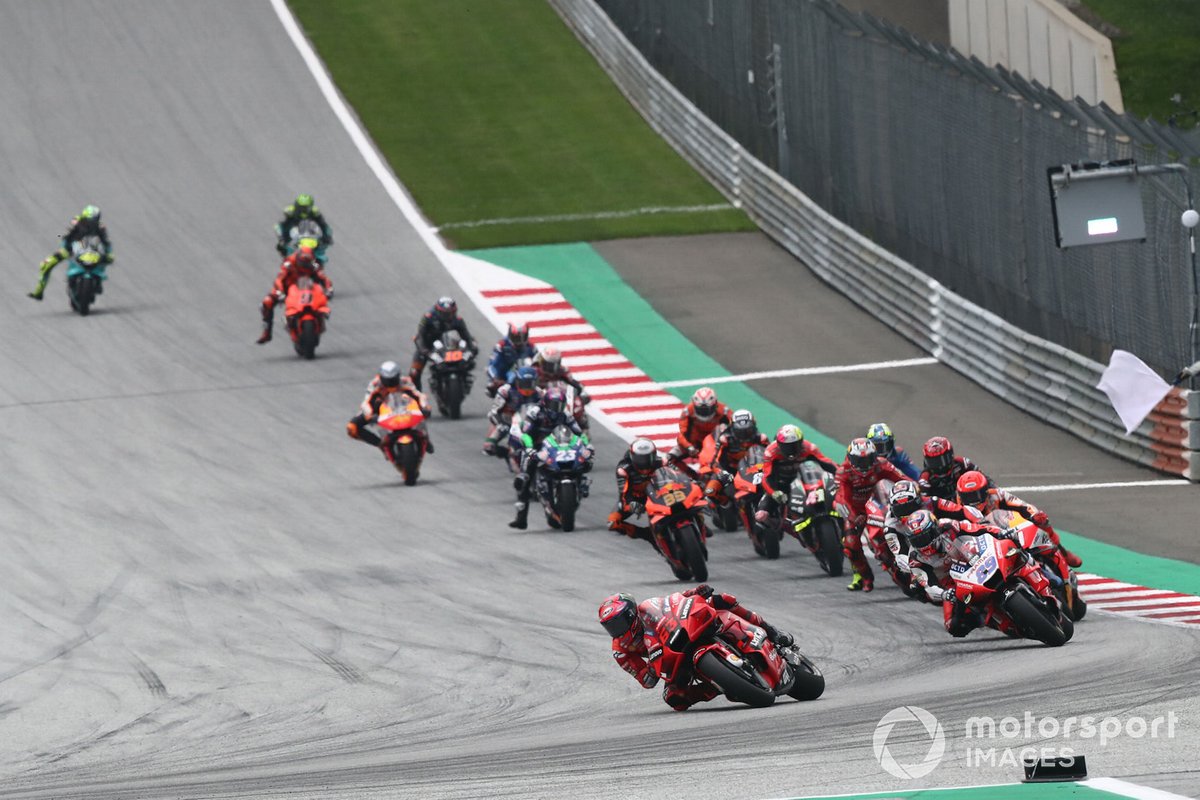 Mir was fourth on his Suzuki ahead of Marini, scoring a career-best fifth on his two-year-old Ducati ahead of Lecuona, while championship leader Quartararo – who ran off track at Turn 3 after his stop – was seventh ahead of Rossi.

The top 10 was completed by LCR’s Alex Marquez and Aprilia’s Espargaro, while Marc Marquez crashed on the penultimate lap at the first corner following his bike swap.

Miller’s decision to switch to wets earlier than the rest along with Rins didn’t pan out, with both 11th and 14th at the chequered flag, with Tech3’s Danilo Petrucci and LCR’s Takaaki Nakagami between them.

Marc Marquez remounted after his crash to seal the final point in 15th ahead of his struggling Honda team-mate Pol Espargaro, while SRT stand-in Cal Crutchlow was the final classified runner.

Miguel Oliveira was a late crasher on the factory KTM, with Zarco falling out of contention on lap 18 and Avintia’s Enea Bastianini an early retirement after the fairing on his Ducati broke off.

Despite the drama, Quartararo comes out of the Austrian GP 47 points clear of Bagnaia and Mir in the standings.