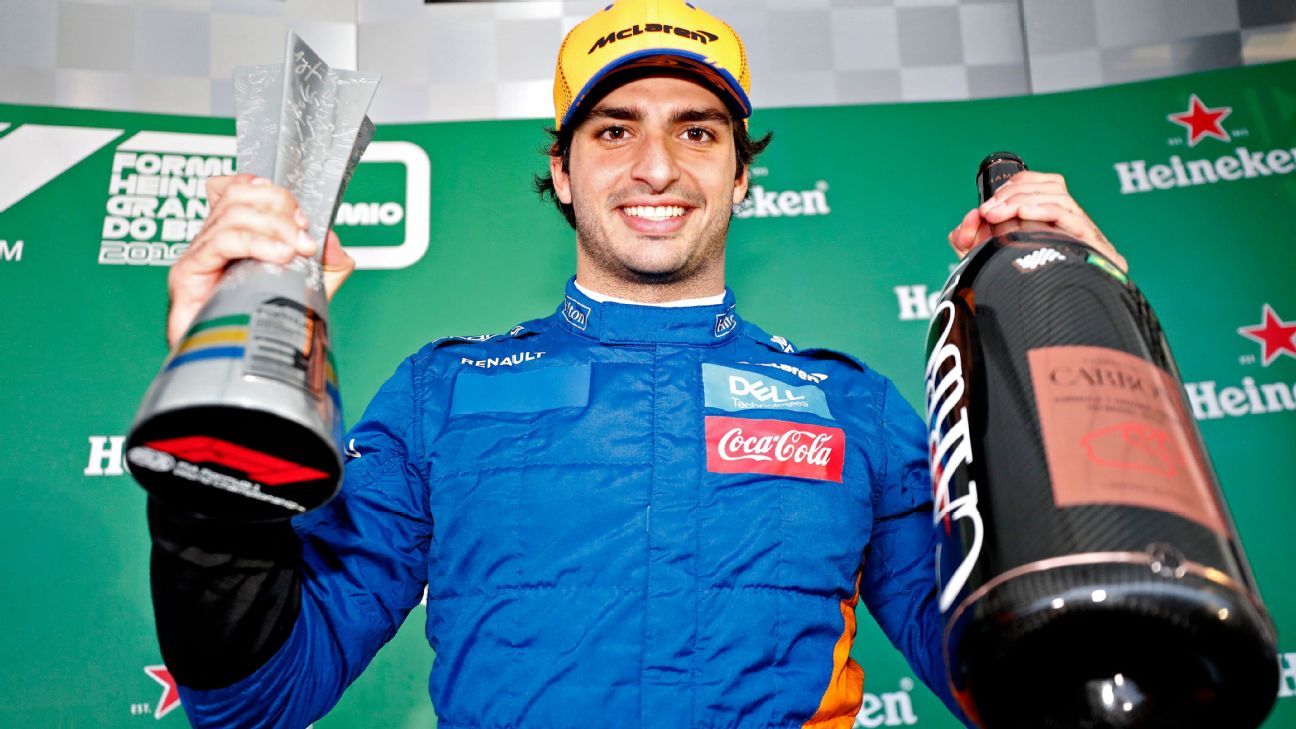 They say good things come to those who wait — McLaren’s Carlos Sainz found that out at the Brazilian Grand Prix, as he celebrated his maiden Formula One podium several hours after the actual ceremony had taken place.

Sainz’s spot on the post-race podium was taken by reigning world champion Lewis Hamilton, who had finished in third position, albeit while knowing he had to visit the stewards to explain his late collision with Red Bull’s Alexander Albon. Even in the post-race press conference, Hamilton admitted he anticipated a penalty and took full responsibility for the clash.

Two hours after the race finished Hamilton was given a five-second time penalty, which relegated him to seventh position. However, it was uncertain whether Sainz, who had finished fourth, would inherit the place or face a penalty of his own for using his Drag Reduction System (DRS) overtaking aid while double waved yellows were being shown so marshals could recover Valtteri Bottas’ stranded car.

Drivers had been told in Friday’s drivers’ briefing that penalties would be handed down for opening the DRS during any double yellow situation, but Sainz was let off.

“It was actually the main topic on Friday we spoke about,” Bottas said after the race. “They said that there would be penalties for that. Obviously, double yellows it means something severe. Pretty bad things have happened in the past with yellow flags so for sure it’s not something to play with, the DRS.”

After the race it was revealed Sainz was one of eight drivers to have momentarily opened the DRS flap on the rear wing while double yellows were in operation. FIA race director Michael Masi put this down to a force of habit and said all eight drivers had otherwise obeyed the number one rule of double-waved yellows — slow and be prepared to stop.

“We looked at it and the overriding factor was double yellow flags is the requirement to slow, and significantly slow, and that’s what we looked at with all of them,” Masi said on Sunday evening. “All of them complied with that.

“Yes, a few of them did activate DRS for a relatively short period of time. I’ll call it muscle memory. There isn’t the ability of isolating single DRS zones to turn them off. It’s either, they all get turned off, or… We had the stewards look at that and decide no investigation was necessary. The overriding factor of slowing for the double yellows was absolutely complied with.”

When it was confirmed no penalty was forthcoming, Sainz was able to finally celebrate the best result of his F1 career in the Interlagos paddock. He had done it from the back of the grid, having failed to set a time in qualifying on Saturday afternoon.

The Spaniard was joined by McLaren employees and his rookie teammate Lando Norris on the podium. Norris had let Sainz past him on lap 52 without a fight while struggling for pace at a key point in the race.

“It’s been a stressful last few hours,” Sainz told Sky Sports after his third-place finish was finally confirmed. “For your first podium you are nervous — you don’t know how to act, how to react, especially without knowing the result. To get it coming from last [place] is very, very special.

“I cannot thank enough the team and everyone involved in this because so far this year has been a dream come true and last but not least we got the podium.”