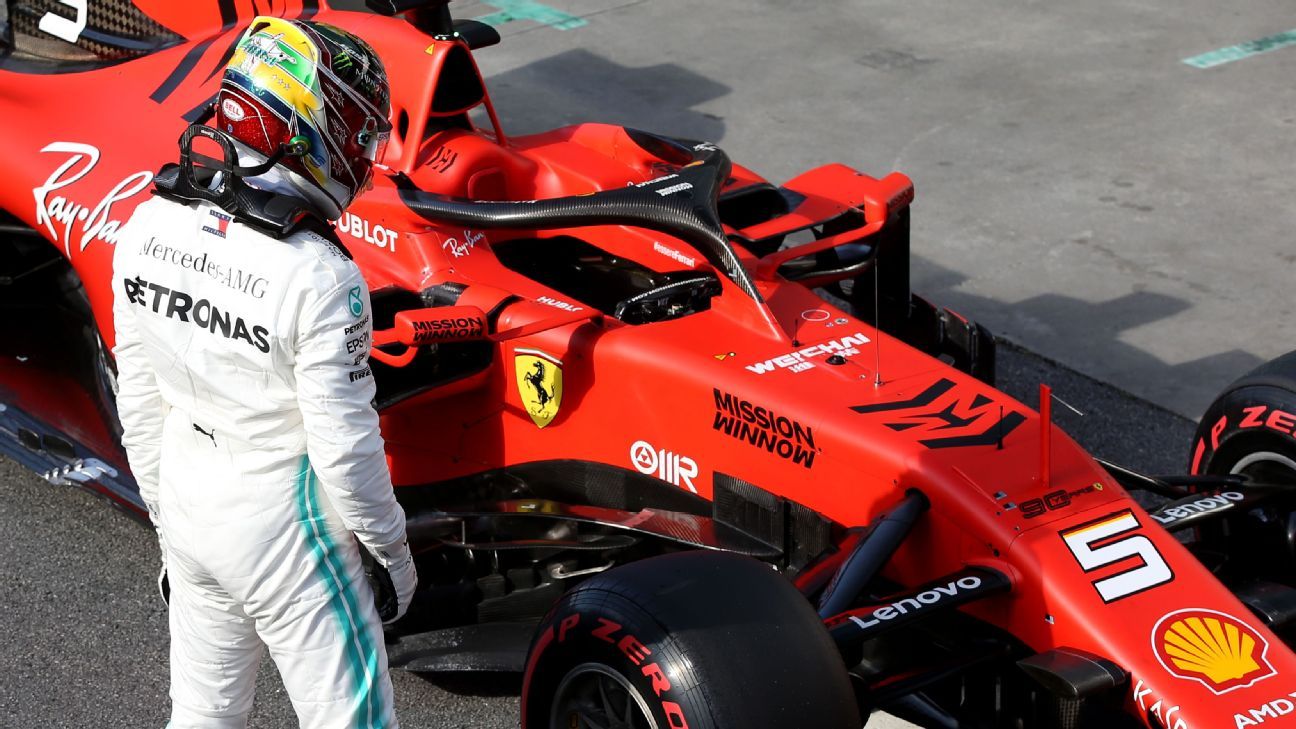 The championship might be done and dusted, but the Brazilian Grand Prix is set to be a thrilling contest between F1’s three top teams.

Max Verstappen is on pole, ahead of Ferrari’s Sebastian Vettel and Mercedes’ Lewis Hamilton, the new six-time world champion. We look at the main talking points ahead of the penultimate race of 2019.

After an FIA clarification over what is and isn’t allowed regarding fuel systems in Austin, speculation about Ferrari’s engine performance erupted when the Italian team was off the pace all of a sudden. Max Verstappen said he was “not surprised”, adding “that’s what happens when you stop cheating”.

Ferrari denied the speculation, while those refusing to jump to conclusions hoped Interlagos might hold more answers.

Frustratingly, the results proved inconclusive. Friday practice suggested Ferrari had regained its power advantage over its rivals, but Saturday was a lot more even between the top teams. That picture is complicated because we know Ferrari made setup changes ahead of Saturday morning to protect its tyres in the race, and that may have included running more wing and trimming some top speed as a result. What’s more, when it came to the final qualifying laps it was the Honda in the back of the Red Bull and not the Mercedes that appeared to close the gap the most to Ferrari.

The Honda performance was the curve ball. For the majority of the season, the Japanese manufacturer has been lagging behind both Mercedes and Ferrari, so it seems odd that Red Bull, and not Mercedes, were Ferrari’s closest competition on the straights.

After the session, Vettel took the opportunity to throw a little jibe back at Verstappen.

“It was a bit of a surprise to see them that quick on the straights, so… a little bit suspicious!” he said with a smile one his face.

But the reason for Honda’s sudden step up is relatively simple. The Japanese manufacturer opted to increase the size of its compressor for 2019, and in doing so has gained an advantage at high-altitude races. Renault held a similar advantage last year when it had a bigger compressor, while Mercedes, which has always had a compact compressor for packaging reasons, tends to lose out.

“We come to a couple of tracks a year, Mexico the most extreme example [at 2,250 metres] and Brazil less so [at 760 metres], where the air is thinner and the compressor has to do more work to get the charge up to sea-level conditions,” Mercedes technical director James Allison explained.

“You can size your compressor to cope with Mexico and here, but then you are carrying around hardware that is bigger than it needs to be for the rest of the season and it’s always a compromise doing that.

“I think looking at the last few seasons, when we are at altitude we always tend to be a little bit less on form and I think that is probably an indication that the position we have picked for our compromise is slightly different to the others. That’s our best guess.”

That’s all well and good for Red Bull-Honda, but it still doesn’t answer the Ferrari question. That may become clearer in Sunday’s race, but given the way the altitude has skewed Honda’s performance, we will probably have to wait for the final round in Abu Dhabi — if we get an answer at all.

“The only thing that you can stand back from a distance and say is that it’s two races on the trot where it hasn’t been pole position for Ferrari and they’d sort have had a reasonably comfortable margin [before],” Allison said on Saturday evening. “So it’s an interesting thing but not anything you can draw solid conclusions from. It’s still a quick car on the straights and let’s just see how they are I the race tomorrow and the race to come.”

A hard race to predict

Mercedes simply didn’t have the pace to match Red Bull and Ferrari during qualifying at Interlagos, with Lewis Hamilton giving away time in all three sectors to his rivals. But the driver on pole position has only won six of this year’s 19 races and it would be unwise to count out Hamilton or Valtteri Bottas just on the basis of Saturday’s results.

“We know in the race we are maybe not as strong as in qualifying,” Vettel said, ‘but I was quite pleased with the balance. We did another long run this morning in practice and it felt much better than yesterday so that gives me hope for tomorrow.”

Hotter temperatures on Sunday may skew the picture from Friday practice, but if anything it will be in favour of Mercedes and Red Bull, which have the best reputation for looking after tyres.

“I think it’s a race that we will have to go into with an open mind, because the conditions we expect on Sunday are very different from the ones we saw on Friday when we did most of our assessment on tyre behaviour,” Mercedes technical director James Allison said. “So I think probably tomorrow will be a race where — given the top three cars are very close to each other in overall performance — I think tomorrow will be a race where the car that reacts best to the hotter track and the teams that make judgements based on the degradation we are seeing on the fly, as the race actually happens, will probably be the happiest at the end of the race.”

Hamilton’s chances will largely depend on leapfrogging Vettel and taking the fight to Verstappen early in the race, which could be particularly spicy given Hamilton’s recent comments about Verstappen’s racecraft and the Red Bull driver’s response.

A chance to make amends

When introduced as having claimed his second career pole position in the post-qualifying press conference, Verstappen held three fingers up and said: “Third”

It was a clear reference to the Mexican Grand Prix last month, where he qualified quickest but was demoted for failing to slow for yellow flags. Officially, it’s only pole position if you start the race from the front of the grid. Verstappen made amends nicely with his Saturday afternoon performance and he on Sunday he has the chance to put right another moment he can claim to be an injustice.

Verstappen can claim he should have more than seven career victories – that tally should be one higher, at least, after what happened at Interlagos last year. While leading that race, Verstappen collided clumsily with Racing Point’s Esteban Ocon while trying to lap the Frenchman. That incident was infamously followed by an irate Verstappen pushing Ocon after the race.

Speaking to Sky Sports on Friday evening, Verstappen said he is over what happened last year, joking that he now views it as karma for his father Jos punting Juan Pablo Montoya out of the lead in the 2001 race at the same circuit.

When asked about putting that lost victory right on Sunday, he said: “You should never approach it like that. That’s done, it happened, and of course it’s not nice when it happened, but yeah we just try to have a good race again.”

Regardless of what he says, it’s fair to say we can expect to see a fired up Verstappen on Sunday afternoon.

Having been absolutely nowhere in Mexico or its home race in the U.S., the two Haas cars were in the top-ten shootout on Saturday evening in Brazil. The team’s 2019 has been punctuated by a failure to understand the reasons behind its temperamental car. Some days it can look like the class of the midfield — although those days have been few and far between in this half of the season — but more often than not it has faded towards the back of the field.

In a bid to find a solution, the team has stripped back all the upgrades it has introduced through the year, meaning both Romain Grosjean and Kevin Magnussen are essentially running the car which rolled out of the garage in the season opening Australian Grand Prix. That might leave Haas wondering what might have been if it had gone a different direction on strategy, but it only adds to the questions around the team’s mysterious 2019 car.

Both Haas drivers are braced for a drop back down the order tomorrow.

“A brilliant job by the team, having both cars into Q3 is unbelievable,” Grosjean said afterwards. “Tomorrow may be a different day but it doesn’t matter, we take the pleasure from today.

“It’s been great. In free practice, we didn’t get to show the speed we had, but I had confidence we would be around P11. Then Q2 went really well and Q3 not too bad. I was following Verstappen, which was not a good idea, as I didn’t get the tow – he was too fast and was too far away. Happy for the team, bear in mind it is the car from Melbourne.”

Some facts worthy of mention: