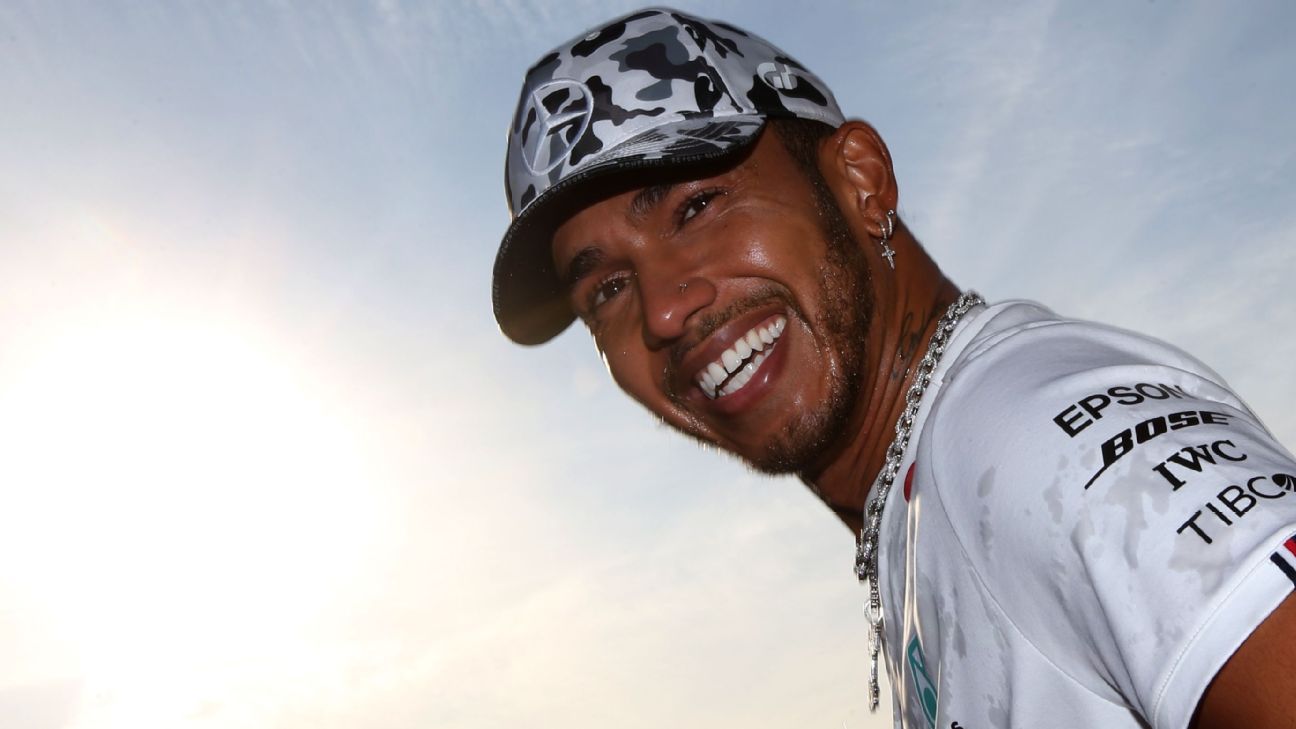 AUSTIN — After securing his sixth world championship on Sunday, Lewis Hamilton stands alone as the second most successful driver in Formula One history. Only Michael Schumacher’s seven world championships and 91 wins outranks him, but at this rate — and with talk of a new contract keeping him at Mercedes beyond 2021 — there is no reason to think he won’t break those records. But as tantalisingly close as statistical G.O.A.T. status is, he insists it’s not the factor driving him on.

“I’ve always said to you that reaching Michael’s was never a target for me,” he said on Sunday evening. “I’m not really one that really thinks of records and those kind of things.”

It’s understandable. His childhood hero, Ayrton Senna, won three titles before his untimely death while leading the San Marino Grand Prix in 1994. Hamilton has now doubled Senna’s tally but that doesn’t make him twice as great.

It’s often said that making comparisons across eras in Formula One is a fool’s errand — regulations change, cars change, teams change, the risks change, the demands placed on drivers change. There is no fair way to compare Hamilton’s six titles with Schumacher’s seven or Juan Manuel Fangio’s five.

Rather than focus on the numbers, Hamilton is working on building his own individual legacy in F1. Or as he calls it, his “masterpiece”.

“I’m so grateful to this sport for giving me a life and giving my life purpose,” he said. “Also, with social media, we have this platform where you can have an impact on people so I’m grateful for the position I’m in.

“I really like the idea of trying to create a masterpiece. I think we all should be challenging ourselves to create our own masterpiece in some way, shape or form, and mine’s not finished.

It might sound a little self-indulgent to refer to a career as a racing driver as a “masterpiece”, but that attitude is at the core of what has made him so successful. Hamilton is hugely talented but he also works incredibly hard to achieve his goals. He has dedicated his life to his craft (given the level of skill involved the word “craft” is absolutely in context) and his results against tough competition undoubtedly mark him out as a master of it.

Mercedes team boss Toto Wolff knows Hamilton better than most and has had a front-row seat to watch the master at work since he joined the team in 2013. So what’s the secret?

“He just drives cars bloody fast,” Wolff said on Sunday night. “It’s where talent meets a big push for self-improvement all the time. And that combination, the background, makes him stand out in his generation.

“He will always say there is room for improvement, and I think this is the mentality you need to have. He is, for me, on an extremely high level. But you never want to give yourself or anybody 10 out of 10 because you might just be a 9 and you want to have the room for being a 10 in the future.”

Hamilton’s backstory only adds to the legend. His started out as one half of a father-and-son team, racing a fifth-hand go-kart to championship success on a shoe-string budget. The odds were stacked against him, yet he emerged as the greatest driver of his generation.

Hamilton’s father, Anthony, took on multiple jobs and re-mortgaged his house to raise the money to compete. He knew his son was something special but there was absolutely no guarantee they would make it all the way to F1, let alone sit in a car capable of delivering a championship. And that backstory is still a constant source of strength and inspiration for Hamilton.

“I remember watching this sport when I was younger, waking up, coming downstairs, my stepmum, Linda, who’s here today, she would make me a bacon sandwich and me and my dad would sit there together and watch the grands prix,” he said “It’s odd to watch it and see someone in the TV set and now to be the person that’s in the TV set and be doing something like the great that I saw in Ayrton [Senna] and the great that I saw in Michael.

“It’s beyond surreal to think that this journey, my life journey has brought me to this point in winning a sixth title. But I don’t really know how I’m supposed to feel right now. I just feel… I don’t believe in the whole cloud nine thing, but I’m flying super high right now”

Like so many talented individuals, Hamilton has his flaws. Yet as part of his pursuit of perfection, he acknowledges his weaknesses and wears them on his sleeve. His confidence in his own ability means he doesn’t have to shy away from those imperfections, and in confronting them he has grown ever stronger. It’s a message he is keen to project to the world, and an increasingly important cornerstone of his success.

“Every year you go through a different rollercoaster ride of emotions to get to where you’re going,” he said. “I wrote something in a post [on Instagram] this morning, that each and every single one of us is struggling with something in life. Whatever it may be: small, big. I tried to show people that, from the outside, things always look great but it’s not always the case. And I am also struggling with lots of different things and battling certain demons and trying to make sure that I’m constantly growing as a person.

“There’s always the darker side that’s always trying to pull you down. I don’t know how you guys wake up in the morning but I look in the mirror and I’m trying to lift myself up and say ‘yes, you can do it. Yes, you are great. Yes you can be fit if you go and put that time in. Yes, you can win this race if you do the right steps and you continue to believe in yourself, and no one else is going to do it for you.’

“So it’s just encouraging yourself always and I’m just trying to show a side that I didn’t understand in the past — that we’re all similar in many ways.”

Arguably, that message is all part of Hamilton’s “masterpiece”, but his desire for self-improvement doesn’t stop at the race track. In an interview with ESPN ahead of the U.S. Grand Prix, he talked about his concerns about climate change and how he is changing aspects of his life in an attempt to become carbon neutral.

He accepts that being a racing driver is not a job that marries perfectly with his views on the environment, but he intends to use his position to try to create change for good. In his role at Mercedes, he is a very public figure in one of the biggest car companies in the world. It’s a position he wants to develop so that when his F1 career eventually comes to an end, he can continue to have an impact on issues that are important to him.

“It’s about how I get more in-depth so that when I stop racing I am still part of it,” he said. “Right now, if I stop racing, I’m just the most successful driver Mercedes have ever had — but that’s not enough, I want to be more impactful.

“So how can I help shift, for example, Mercedes using suede and leather in every car. You could easily use faux leather and faux suede and nobody would know the difference — and that would make a big, big difference to the world.”

So what next? What does the final masterpiece look like? Even in Hamilton’s mind that doesn’t seem clear just yet. And in a season that has been tinged by tragedy following the loss of Hamilton’s good friend and Mercedes chairman Niki Lauda and Formula 2 driver Anthoine Hubert at Spa-Francorchamps, Hamilton says he is just focused on enjoying his most recent success.

“I don’t want to build up the idea of trying to get to Michael’s record of seven titles, because at the moment, I’ve got enjoy right now. Tomorrow’s not a given, I don’t know what’s going to happen over these next days or months but what I have to do and what we all really should try to make sure you enjoy each day because one day you’re here and one day you’re not.

“So not trying to think of what’s going to happen potentially at the end of next year or 2021. I believe that I have the ability to continue to grow and to do more with this team and within Formula One and so that would be the target but time will tell. Right now I just focus on trying to be as fit and healthy as I can be and smile as much as I can and enjoy this beautiful journey we call life.”