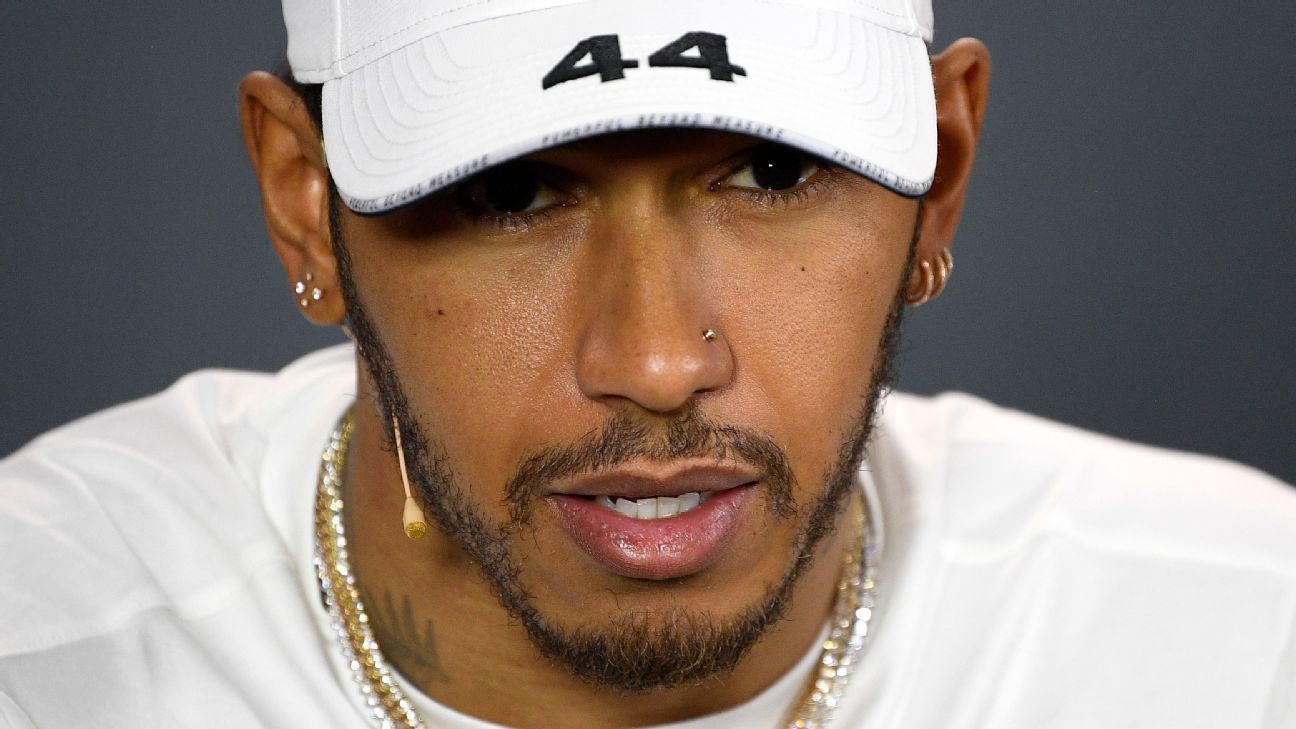 AUSTIN, Texas — On Saturday night at Circuit of the Americas outside of Austin, Texas, Lewis Hamilton found himself stuck in those awkward early-evening hours between a frustratingly disappointing United States Grand Prix qualifying effort (fifth) and the exhilaration of knowing that in less than 24 hours he would likely be celebrating his sixth Formula One world title.

In the middle it all, he took the time to sit down with ESPN in the paddock, amid the sounds of his Mercedes-AMG Petronas F1 team working on his ride for Sunday’s race. Dressed casually, his hair pulled back through his Mercedes ball cap and sipping tea, the 34-year-old discussed his place in F1 history and the mindset it takes to make that history and fielded some questions sent to him via ESPN.com by racers from other motorsport disciplines who also happen to be Lewis Hamilton fans. Not to mention some kind words from the man many call the NFL’s greatest-ever quarterback.

Here’s that exchange, in full, below.

Ryan McGee: You’ve been here in this situation so many times before, on the eve of a world championship. For the rest of us, the 99.99% of people who will never know what this feels like, what is your mindset tonight, Sunday on the grid, the week leading into all this … what does a championship feel like?

Lewis Hamilton: It’s different each time. What people have to realize is that, and I’m sure they do, but it’s a journey through the year. From the moment that the new year starts to the training and preparations, the ups and downs, the tough training days, the tough practice days, the good and the bad races. You know? It’s been a roller-coaster ride through the year. So, it’s mixed emotions, but with experience. You’re able to learn each time. From each mistake, you learn each time. You often are better prepared for dealing with scenarios. I mean (qualifying fifth) was a shocking day for me, one of the worst days, I would say generally, one of the worst qualifying that I’ve had for some time. But you know, these things are sent to try you. It’s not how you fall. It’s how you get back up.

RM: The numbers are so incredible. The 83 wins. A sixth championship will move you ahead of Juan Manuel Fangio into second, only one behind Michael Schumacher. I have asked this question of everyone from Jimmie Johnson to Richard Petty to Schumacher himself, so now I will ask you. When you are away from this season, in the off-season and away from the pressure of what you’re in the middle of right now, do you ever give yourself a chance to appreciate the numbers and the names that you find your name sitting with? Do you get a chance to appreciate that now, or is that something you do when you retire?

LH: I don’t know because I have not got to the retirement part yet, but I personally don’t think about it. Each year I set myself a goal, and it’s obviously great. You’re riding a beautiful wave if you do get there through the winter. You’re feeling that you’ve done all you came to achieve. But I don’t know. I think that there’s a certain bit of piece in your heart and it’s hard to measure that, but I’ve never looked to numbers and I really don’t care about numbers. It really doesn’t mean a lot to me.

RM: Those of us who cover auto racing and fans of auto racing, we feel like we have watched you grow up. We’ve seen the pictures of you the kid, and we know that kid. Now we know the champion. What does it feel like to have fulfilled this promise that was pinned on you at a pretty young age, by so many of us, as the next great one?

LH: I think, when I look at my career, I think what people have to realize is that none of us are perfect. I’ve been on the journey in my life. I’ve made so many mistakes it’s hard for people to understand that you practice and practice and practice in lower categories to race in Formula One, but you’re not prepared for the media. Never had media training. I never had a PR team at the beginning of my career for the first God knows how many years. So, I was never protected. I was never taught and guided on what I should or should not say. You’re thrown in the snake pit.

But through those mistakes, unfortunately, because it’s in the public eye, people then create opinions and they’re long-lasting opinions, and it’s hard to shift those opinions and for the people to get used to the fact that it’s not how it seemed initially. All I do is try to put out positive energy in everything that I do and as many people that I meet and reach. I’m so grateful for the support that I’ve had all these years, and I always use the slogan that we’re willing to lose together because that’s my team, but that’s also a team with age, who I’m so thankful for who travel around and support me around.

RM: A lot of those supporters — and fans — are your fellow race car drivers. I’ve been texting with a lot of them today. Some guys you know and some you don’t. I said, “All right, you have one question for Lewis Hamilton. What would it be?” Mario Andretti, ran into him a little while ago, 1978 world champion, and his question was “What is it about this racetrack in Austin that connects so well with you?” Five wins in seven trips here.

LH: I’ve always loved America. I always loved it in the States. I think growing up in England, and maybe it’s the same for people in America who watch English movies, I grew up watching a lot of American movies and dreaming of one day getting to New York and the States. I spent a lot of time on a U.S. base in the U.K. I loved the celebrations they had for Halloween. It’s like they do everything bigger and better, generally. Obviously, England is a beautiful place. I think when I come out here to Texas, I do feel a little bit at home. A bit of my childhood was in the U.S.; I think over here, they’re real racers. As for the track, particularly, it’s a new track, they did a good job with it. Usually, the new tracks aren’t very good.

LH: Whoever the guy is that is designing them, he’s just not getting it. The majority of the time, usually the older circuits, the old classics, I don’t know who built them, but they’re older circuits. Nurburgring, the old Silverstone, Spa. Even out here, you’ve got, where was that track I did the car swap with Tony Stewart?

LH: Certainly classic, you know? It’s got real character. You know? A lot of these tracks don’t have it, but they did a really good job with this one. They created that character. When I think, this is a track that really rewards an aggressive driver. At the top, you can get quite aggressive.

LH: Where do we hang out in New York? I don’t know too many places in New York.

RM: How about a Yankees game?

RM: That’s about as American of an experience as you can have, right?

LH: Yeah, I love the U.S. sports. My favorite is the NBA, then the NFL. Big, big on those. Then I went to a Yankees game. When you watch a movie, they hype it up. It looks so much cooler and then you get there and it’s not as it seems, but it’s still a cool game. But I really like the NFL and watching the Super Bowls. If I can I would fly to a Super Bowl because I love watching the games and the buildup to them. The athletes are just incredible. What they go through. I’ve got a huge amount of respect. Tom Brady is actually my neighbor in New York, so it’s kind of neat to have him downstairs.

RM: On Friday we asked Tom Brady about you. He said that he knows you and he’s a fan of yours. So, when a great athlete, a six-time Super Bowl champion says that, what does that mean? Thinking about things very differently than other athletes.

LH: First of all, it’s surreal, if I’m being honest, because growing up watching these incredible athletes be the ones that are right at the top. I’ve seen him playing at his best, again, at a Super Bowl against Atlanta [Super Bowl LI, the Patriots came from 25 points down in the second half to win] and just performing miracles. And it’s interesting because as I’ve gone through my career, I’ve been fortunate enough to meet the top athletes, talking with [Novak] Djokovic and [Rafael] Nadal and Tom. To get to a place where you start to see a common ground between yourselves and you start to realize that you actually have a lot in common in terms of how you prepare and how the struggles that you go through mentally and you can learn a lot from these people. When you get positive words from a great like Tom it’s really warming to the heart and I’m very grateful for, the fact that he even knows my name, it’s so cool, man (laughs).

RM: That’s how a lot of American racers feel when they know that you know their name. After my request for Lewis Hamilton questions I’ve heard from JR Todd and Antron Brown, NHRA Drag Racing champions, and Bubba Wallace, the NASCAR driver, and they all mentioned you as an inspiration. These are all, or course, racers of color. Wallace specifically wanted to ask you a question that he asks himself. After all of this time, how often are you still asked the question about being a groundbreaker? The color of your skin and what that means, not just to racers, but to the sporting world in general.

LH: I don’t think it comes up that much. But what’s really important is to celebrate individuality and the fact that we’re unique. We’re all unique and I’m very, very privileged to have my own uniqueness here in the sport being the only black family in the sport. But what’s really great is that over the time I’ve seen more people of color, minorities coming to the races in the different countries that we’re going to. We get so many messages from people. It’s really beautiful. Hopefully, I can keep going. I hope I can continue and try to make those people proud and help those individuals who are going through difficulties, as we all do. We are all struggling in life. It’s all not what it seems from the outside. We’re all struggling with something, but together, collectively they help me get through things and I hope that I’m able to do the same.