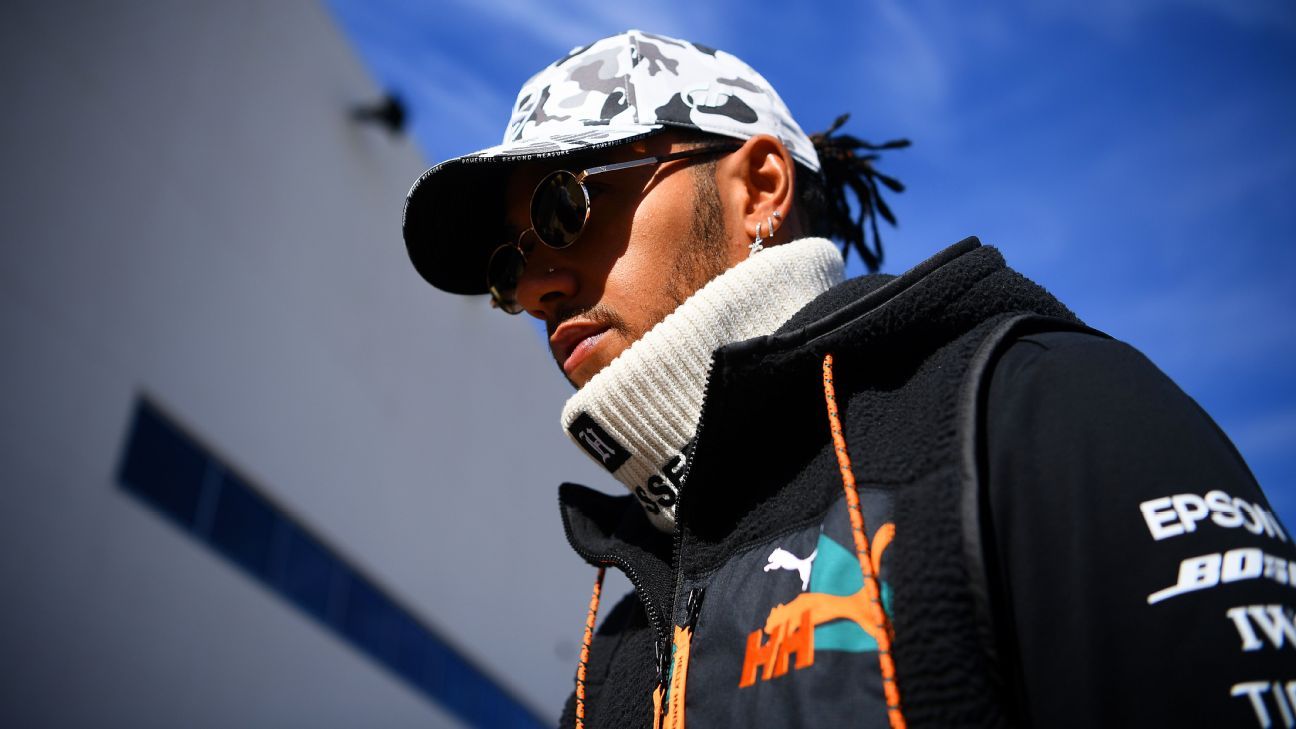 AUSTIN — Securing the championship at the U.S. Grand Prix might be a cakewalk for Lewis Hamilton, but wrapping things up with a victory or a podium might be a bit more of a challenge after the Mercedes driver qualified fifth. Teammate Valtteri Bottas showed the potential of the car by putting it on pole position for Sunday’s race.

Hamilton needs to finish eighth or higher to win the championship, but he hasn’t had things go his way so far in Austin. The 2019 champion-in-waiting is where our roundup of Saturday’s action must begin.

Jump to: Lewis and Max clash again | Has Ferrari lost its power advantage? | Bottas back on top | F1’s bright future in America |

Hamilton left Mexico in a triumphant mood after all but securing the championship with victory, but he was brought back to earth somewhat on Saturday afternoon with a below-par qualifying effort for fifth on the grid. Hamilton knows he needs eighth or better on Sunday to secure the championship with two races to go, but he has stated his intention to win it in style with a strong result.

He was in no mood to make excuses for his performance Saturday afternoon, saying: “It was nothing to do with the car. It was just me. I just didn’t pull the laps together today. Clearly the car had the capability to be on the front row, and I just didn’t do it today. It was my fault, but I will try and rectify it tomorrow.”

Starting on the third row might keep him away from any Turn 1 battles for the lead, but the chance of getting sucked into a crowded midfield at the top of the hill will also be at the forefront of his mind as he stares at the starting lights ahead of the race.

Given what happened in Q2, it’s probably best that he isn’t starting next to a fired-up Max Verstappen.

Verstappen and Hamilton have been like opposite ends of a magnet recently, with both narrowly avoiding contact during the middle qualifying session. The pair clashed on the opening lap of the Mexican Grand Prix while vying for position at Turn 1 — forcing both across the grass — but this one was with no race positions at stake.

As the two prepared for their second Q2 lap, Hamilton broke the vague gentlemen’s agreement that exists between drivers by overtaking Verstappen into Turn 16. Verstappen, clearly not impressed, took chase of the Mercedes, and the pair soon came across Daniil Kvyat at Turn 19. Hamilton lunged to the inside, but as he did so, Verstappen went to the inside of him and cut across the grass. Hamilton emerged at the exit of Turn 19 in front of Verstappen and Kvyat, but as he slowed for the final corner, both cars came straight back past him.

It was messy and ultimately resulted in all drivers compromising the laps they were on.

Immediately afterward, Verstappen gave the man in charge of bleeping out radio messages a frantic few seconds with an expletive-laden message in Hamilton’s direction, claiming the Mercedes driver had “f—ed us all.”

Speaking in the post-qualifying news conference, a calmer Verstappen explained the incident from his perspective.

“We were all lining up to do our lap to get to the last corner, and I think it was Seb in the first Ferrari, then Charles and then I had Daniil [Kvyat] in front of me, and we were all just slowing down to make space. Then Lewis just drove by like nobody was there and didn’t care.

“So I was like, ‘Well, if you don’t care, I don’t care,’ so I tried to get my position back because everybody is just respecting each other at that point just to start the lap. That’s why it was such a close call.”

Has Ferrari lost some of its power advantage?

Comparing the laps of Bottas and Vettel, the big difference was in the final corner. Bottas was more than 0.125s off Vettel ahead of the braking zone, but he made up all that time and pulled a 0.012s advantage as the cars crossed the line.

Looking at the rest of the lap, it was the usual story. The Mercedes was faster in the slow and medium corners, and the Ferrari was faster on the straights. But the advantage Ferrari held on the straights was smaller than in recent races, and it just so happened to coincide with a Technical Directive (TD) being issued by the FIA over fuel flow to the engine.

All year, Ferrari’s rivals have been trying to understand how the Italian team has gained such a big power advantage from relatively mature engine regulations this season. No official protest has been launched, as nothing has been found to be illegal, but questions over what is and isn’t allowed have been posed to the FIA to try to probe away and find an answer.

In Austin, Red Bull seems to have found a loose thread and, ahead of the weekend, decided to tug at it. After asking the FIA a technical question about how the fuel flow is measured, a TD was issued to clarify what is and isn’t allowed.

“I think it’s very strong that the FIA issued a TD clarifying the situation with some very clear wording,” Mercedes boss Toto Wolff said. “But this is a process that is standard and has happened before and part of the role of the governing body.”

Asked if he had seen a difference in Ferrari’s straight-line speed performance this weekend, Wolff was careful not to reveal too much but hinted at a shift back toward Mercedes and Red Bull.

“Yeah, certainly the three teams were much closer together in terms of straight-line performance here in the U.S., but I wouldn’t say this is down to any specific event. It is just a fact that we have won our first pole position since July in Hockenheim, and we were really in the mix.“

Could it be that the TD has stopped Ferrari from gaining an advantage from a loophole in the regulations?

Bottas back on top