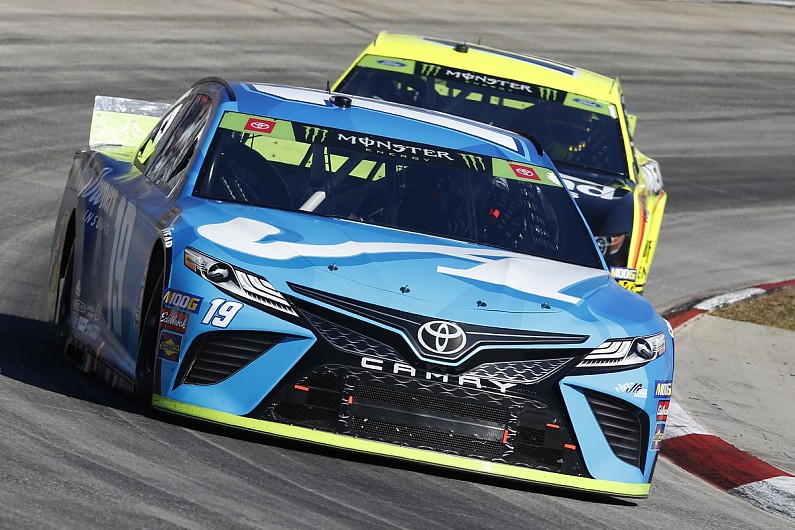 Truex, who led a crushing 464 laps out of 500, moved into the lead of the race at the 0.5-mile circuit after quick work from the JGR crew at an early caution pitstop allowed the #19 Toyota Camry driver to jump his team-mate, the polesitter Denny Hamlin.

Truex scooped all three stages, fending off a late charge from William Byron to ease to his seventh Cup win of the season and in doing so became the first driver to lockdown a place at the championship race at Homestead next month.

Byron, whose race engineer Chad Knauss has nine victories with former driver Jimmie Johnson at Martinsville, ran side-by-side with playoff hopeful Ryan Blaney for most of the race, finally passing by late-on with a forceful move at Turn 4.

Byron comfortably pulled away from the pack after the move with around 40 laps to go, and the Hendrick Motorsports driver went on to score the equal-best result of his career in the Camaro.

Despite sustaining damage to the rear of his Ford Mustang early-on after a collision in the pitlane with Johnson, Brad Keselowski – who fell out of playoff contention in the last race at Kansas – put on a late-race charge to third for Penske.

Keselowski muscled past Blaney with 20 laps to go, but was too far behind to make inroads into the Truex/Byron breakaway.

Hamlin finished fourth after squeezing reigning Cup champion Joey Logano into the wall on the pit straight, which gave Logano a flat tyre and sent him into a spin.

Although Logano was able to continue, and recover to take eighth, in the pitlane post-race, the two drivers exchanged words, which lead to a scuffle where they had to be pulled apart by team members.

Blaney came home fifth ahead of Kurt Busch, with Kevin Harvick producing a quiet afternoon for Stewart-Haas in seventh.

Harvick now sits 15 points beneath the cutoff bubble, with Logano currently currently occupying the final spot to advance to Homestead in championship contention.

Kyle Larson and Ryan Newman rounded out the top 10, as Kyle Busch suffered mid-race contact with Aric Almirola that ruined his race, and ended Almirola’s event.

Almirola was unhappy with Busch regarding the incident, which all caused Johnson to retire, and suggested he would try to make it difficult for the 2015 champion to advance any further in the championship standings.

Busch was classified in 14th place, while Chase Elliott’s hopes of making it through to Homestead as a title contender were dented when he suffered rear damage early-on and eventually finished 55 laps down after his Hendrick crew repaired the car, which allowed him to re-join the race.