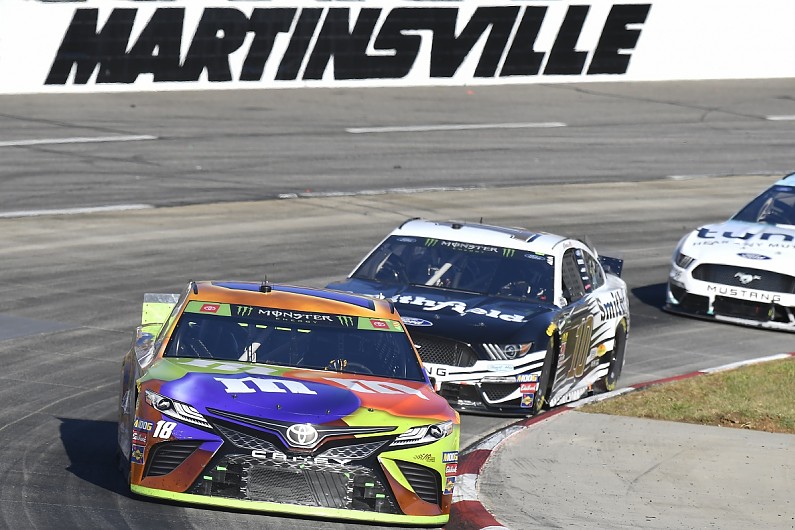 Stewart-Haas Racing’s Aric Almirola says he is going to make Kyle Busch’s NASCAR Cup Series playoff run “hell for him” after the pair clashed at Martinsville.

Almirola and Busch were battling inside the top 10 on lap 361 of 500 when Busch tapped Almirola’s Ford through Turn 3, before the SHR driver retaliated at the next corner.

Busch then hit Almirola at Turn 4 shortly after and the pair were pitched into a spin, leading to Almirola and Jimmie Johnson retiring in the subsequent pile-up that also damaged the cars of Busch, Ryan Preece, Matt DiBenedetto and Kyle Larson.

“We just got together,” Almirola said. “I got inside of him [Busch] getting down in Turn 3, and he chopped me, and I got in his left-rear and moved him up a little bit and got inside of him, and then we hooked and got tangled up off of turn four.

“It’s disappointing. I had a really good Smithfield Ford Mustang and felt like we were maybe one adjustment away from being maybe a second or third-place car, so I’m proud of my guys, proud of the effort.

“We’ve got three more weeks, and I’m going to make it hell for him.”

Busch remains in contention to make the final four at Homestead, with Joe Gibbs Racing team-mate Martin Truex Jr becoming the first to secure a berth by winning the Martinsville race.

Busch finished 14th at Martinsville but is third in the playoff standings and 17 points above the cut line for the season finale.

Giving his take on the collision with Almirola, Busch said: “He ran over me, so I chopped him, and we got hooked together.”