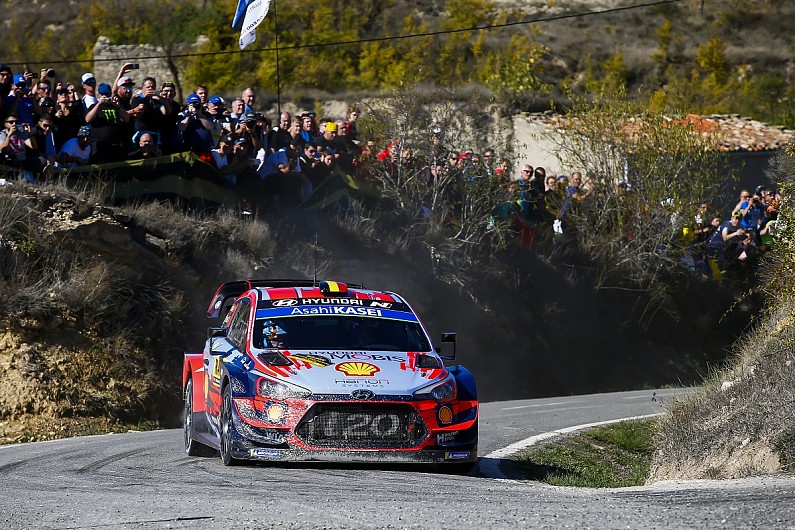 The running began with Neuville, Loeb and Sordo preserving a Hyundai 1-2-3, with Toyota’s Tanak 9.8s behind Sordo.

But Tanak won the first pass of El Montmell that concluded the morning and picked up where he left off with a quickest time on Savalla 2 to start the afternoon positively.

Further stage wins on the repeat passes of Querol and El Montmell then allowed Tanak to chew into his deficit to Sordo who said he “couldn’t do better, for me it’s impossible”.

Loeb was under pressure too as he lost 4.3s to rally leader Neuville on Savalla and fell back into the clutches of the Sordo and Tanak scrap behind.

Like Sordo, Loeb felt he was driving at his maximum but he just could not keep up with Tanak.

The nine-time WRC champion’s time loss was more severe than Sordo’s, and he fell behind his team-mate on El Montmell, taking just a 1.4s buffer to Tanak for the short Salou street stage.

Sordo resisted Tanak’s pressure there, nibbling back 0.2s, to lie 3.1s ahead overnight in second.

But Loeb lost his grip on a podium place, surrendering two seconds on Salou to trail Tanak by 0.6s in fourth.

Neuville could not quite match Tanak’s searing pace either, but due to the ferocity of the squabble behind, he managed to almost double his overall lead across the loop and took the stage win on Salou.

As it stands, Sunday’s powerstage will swing the balance of the championship, as Neuville is currently set to score 10 more points than Tanak, and needs to score 12 more to keep the battle alive.

The positions further down the leader board have remained stable heading into the final day.

Toyota’s Jari-Matti Latvala had briefly looked under threat from M-Sport’s Elfyn Evans on Saturday morning, but Latvala has continued to outpace Evans and is now 22.4s up the road in fifth despite a moment on a sandy corner on Salou.

Evans in turn predominantly had the measure of team-mate Teemu Suninen across the afternoon loop, with the M-Sport duo holding sixth and seventh overnight.

Citroen’s six-time WRC champion Sebastien Ogier languishes in eighth, and needs to either beat Tanak or lose no more than two points compared to his rival to remain in 2019 title contention.

Following the hydraulic problems that left his C3 WRC with no power steering or paddle-shift gear selector on two of Friday’s gravel stages, Ogier is four minutes behind the leaders and used Saturday afternoon as an opportunity to test various car set-ups.