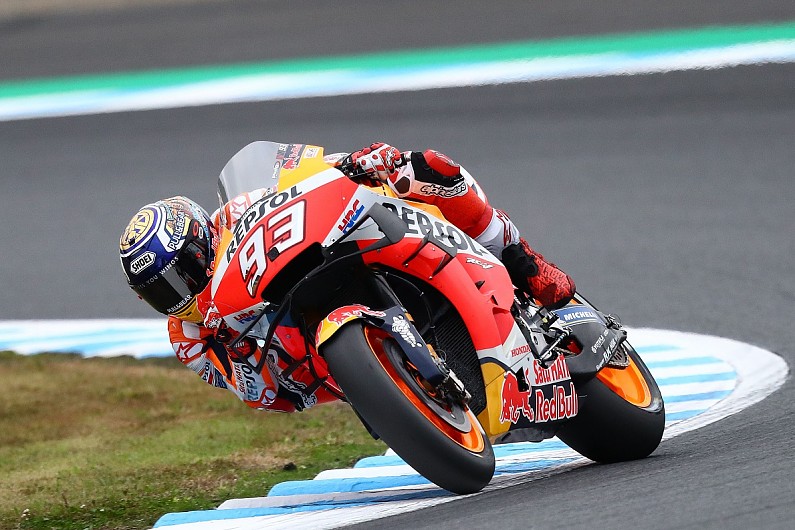 Marc Marquez cruised to his 10th MotoGP wins of the season ahead of Fabio Quartararo to secure Honda the manufacturers’ world championship at the Japanese Grand Prix.

Marquez, who wrapped up his sixth premier-class title last time out in Thailand, led every lap of the Japanese Grand Prix from pole, albeit briefly losing the lead on the first tour.

From third on the grid, Quartararo passed Petronas SRT Yamaha team-mate Franco Morbidelli off the line to grab second, and then made an audacious lunge on Marquez at the Turn 7 left-hander to take the lead.

But the Frenchman’s time out front would be limited to just three corners, as Marquez responded at Turn 10 and was never seriously challenged again.

Quartararo was able to keep his deficit to Marquez hovering at around one second for the opening half of the 24-lap encounter, but by lap 13 the Spaniard had escaped to the tune of two seconds and finally crossed the line 0.870s clear.

In the closing laps, Quartararo had to turn his attentions to the charging Ducati of Andrea Dovizioso, who finished less than half a second adrift in third. 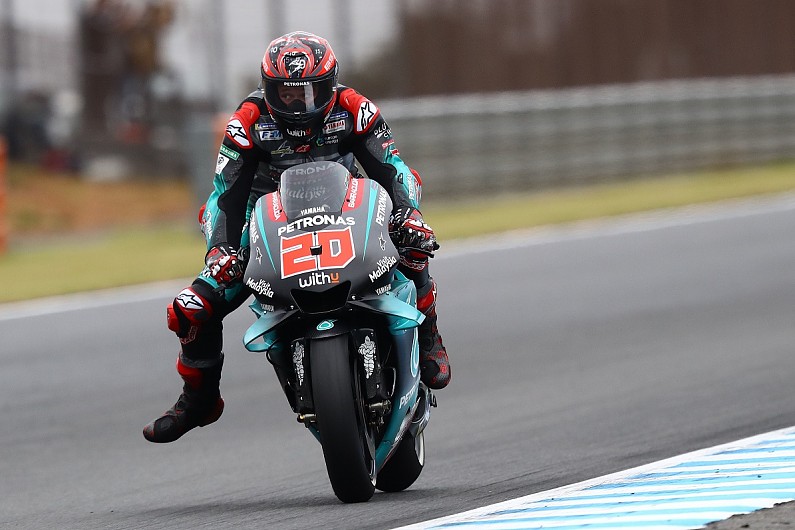 Quartararo’s sixth podium of the season sealed his status as rookie of the year in the standings.

Dovizioso had moved up to third from seventh on the grid, moving up to fifth on the first lap and then picking off Jack Miller’s Pramac Ducati and Morbidelli.

The Italian also saw off a stern challenge from Maverick Vinales on the best of the works Yamahas, with Vinales finally slipping 1.2s behind.

Morbidelli was set for fifth for much of the race after dropping behind Vinales, but was pipped to the finish line by the LCR Honda of Cal Crutchlow, dropping to sixth.

Alex Rins was just another tenth behind in seventh, ahead of Suzuki team-mate Joan Mir, Ducati’s Danilo Petrucci and Miller, who struggled badly running soft tyres front and rear.

Valentino Rossi had been running 11th on the second works Yamaha but crashed out with three laps to run, marking his first DNF since June’s Dutch TT.

Pol Espargaro was 11th on the best of the KTMs, while his factory team-mate Mika Kallio scored his first points as Johann Zarco’s replacement in 14th – one place ahead of the Aprilia of Aleix Espargaro.

Takaaki Nakagami, who had predicted a tough race owing to his lingering shoulder injury, could muster only 16th place on his final outing of the season.

The Japanese rider still managed to beat Jorge Lorenzo, whose insipid form on the second Repsol Honda continued with a low-key run to 17th, 40s behind Marquez.