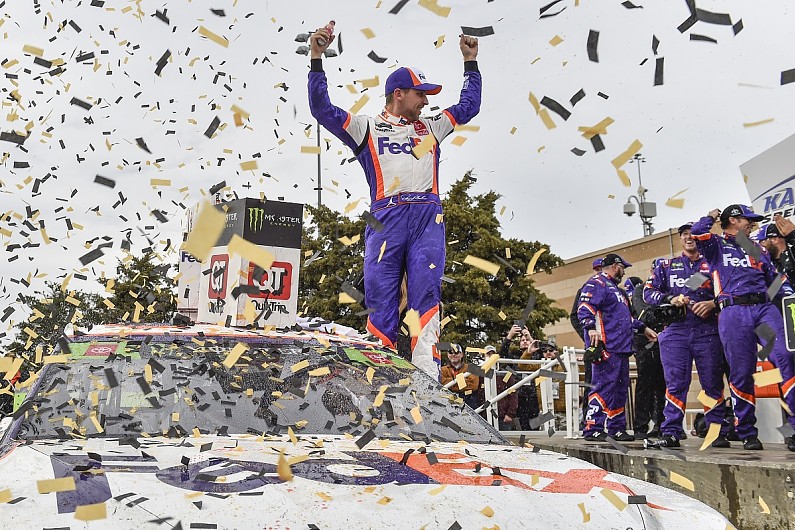 Denny Hamlin secured victory in the NASCAR Cup Series race at Kansas for Joe Gibbs Racing as Chase Elliott edged Brad Keselowski out for the final playoff spot in overtime.

With 10 laps of the scheduled 267 to run, Hendrick Motorsports’ Elliott was three points below the cutoff line for the ’round of eight’ stage of the title fight.

Keselowski’s Penske Ford Mustang sat perilously on the bubble, lacking pace while mired in the midfield but still on course to go through to the next round..

A series of cautions then followed that took the race to overtime, where the first attempt was interrupted by Darrell ‘Bubba’ Wallace Jr’s car shedding a wheel and crashing – causing a chain reaction in which reigning Cup champion Joey Logano went for a high-speed spin over the grass.

Stage one winner Logano had not looked in any jeopardy until that incident sent him tumbling down the order. His eventual 16th place in his repaired car keeps him in championship contention.

At the restart Hamlin’s #11 JGR Toyota Camry held off Elliott’s Chevrolet Camaro to take his fifth win of the season.

With Keselowski having a messy final restart and falling back to 19th, Elliott’s second place got him into the next round by just three points.

Elliott is now the only Hendrick driver in title contention as both Alex Bowman and William Byron were knocked out.

Bowman could only make it to 11th after picking up early damage, but Byron ran strongly in the top 10 for most of the race.

He knew only a win would secure him passage into the next round, though, and finished fifth behind Busch brothers Kyle and Kurt.

Third and sixth places for Kyle Busch and Martin Truex Jr kept them in the title hunt based on their points from this round.

Erik Jones was seventh ahead of the highest placed Ford Mustang finisher, Clint Bowyer, in eighth – a result not good enough to prevent Bowyer’s playoff elimination.

Bowyer’s Stewart-Haas team-mate Kevin Harvick rose from last on the grid, after a driveshaft problem in qualifying, to ninth.

Seven-time Cup champion Jimmie Johnson rounded out the top 10 in his Camaro, despite running as high as third just before the overtime flags flew.

Kyle Larson dominated the opening stage for Chip Ganassi Racing, extending his lead by nearly a second a lap at times, but a late caution and subsequent restart hobbled the #42 and it dropped to a lowly 14th.

Both Larson and 21st-placed Ryan Blaney had earned their ’round of eight’ places with race wins in the ’round of 12′.

Daniel Hemric, starting from his first pole position, quickly dropped back in the race on his way to a 31st place finish.