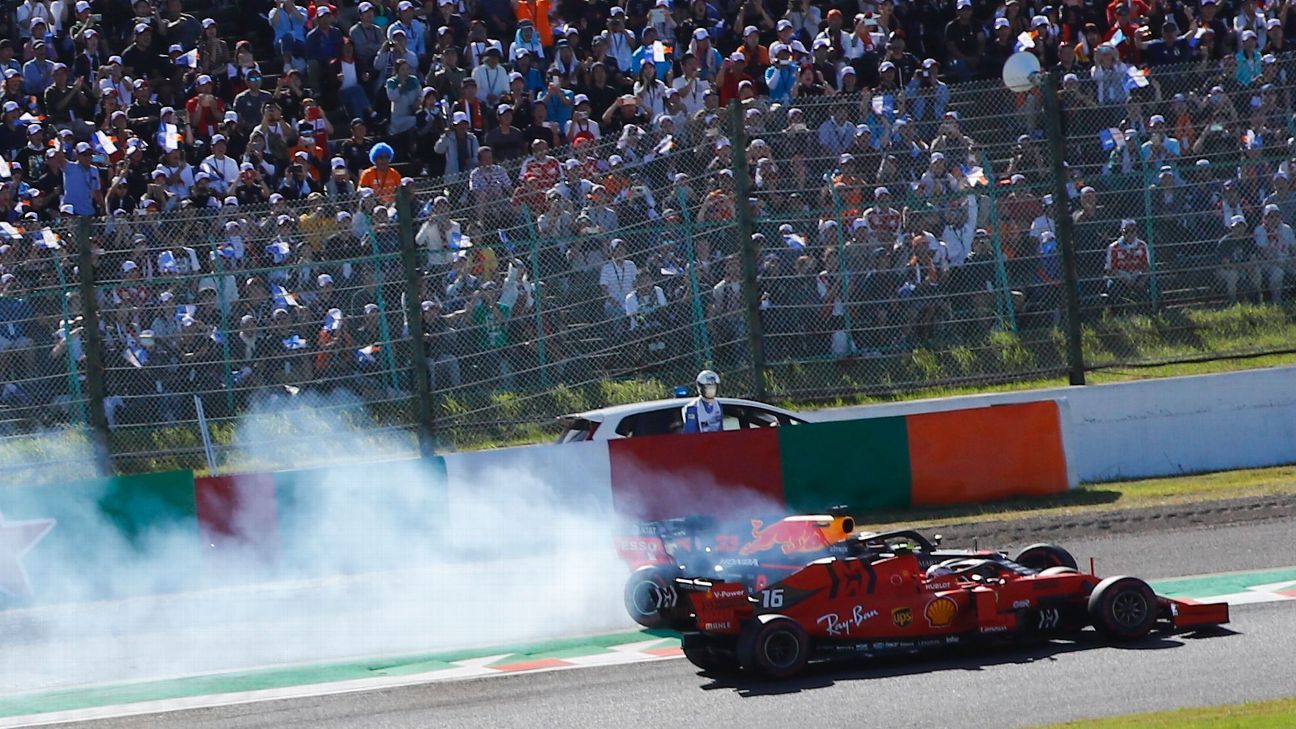 Ferrari’s Charles Leclerc has been relegated from sixth to seventh at the Japanese Grand Prix after being hit with two separate time penalties worth a combined 15 seconds.

Leclerc visited the stewards after the race to explain his first-lap clash with Max Verstappen, which led to the Red Bull driver calling him “irresponsible”. Leclerc had drifted wide and into the side of Verstappen’s car at Turn 2. That incident earned him a five-second penalty.

However, Leclerc had another 10 seconds added to his time post-race for Ferrari ignoring the FIA’s calls to pit the Monaco native to fix his front wing immediately after that clash. Leclerc drove for three laps with the front wing endplate dragging on the ground, with it eventually breaking off and spraying pieces of debris towards Lewis Hamilton’s cockpit which damaged the right-side mirror on the Mercedes. Debris was also lodged in one of the brake ducts of Lando Norris’ McLaren, forcing him to pit from fifth place.

At the time Hamilton asked over his radio channel why Leclerc had not been told to pit. The FIA has the power to instruct a team to pit a driver with an unsafe car, and after the race it was revealed they initially told race control they would pit on the opening lap before changing their mind on the basis of Leclerc’s pace and desire to stay out.

The penalty dropped him behind Renault’s Daniel Ricciardo, who moved up to sixth position in the standings.

The stewards’ verdict said Ferrari ignored multiple requests to pit the car and increased the risk of a major incident in doing so.

It read: “The car continued on after the incident and did not pit at the end of lap 1. During lap 2, anticipating a call about the car, the team told the Race Director they were calling the car into the pits at the end of lap 2.

“After this second piece detached, the team felt the car was now in a safe condition and despite previously telling the Race Director that the car would be called to the pits, they told car 16 to remain out and not to pit. On lap 3 the Race Director called the team and directed the car be brought to the pits for inspection. Car 16 pitted at the end of lap 3.

“By not bringing car 16 into the pits at the end of lap 1, immediately after the incident for a safety inspection when there was damage clearly visible and then by telling the driver to remain out for an additional lap after telling the Race Director otherwise, the team created an unsafe condition on the circuit which only narrowly avoided being a major incident and also increased the likelihood of additional incidents after the one noted.”