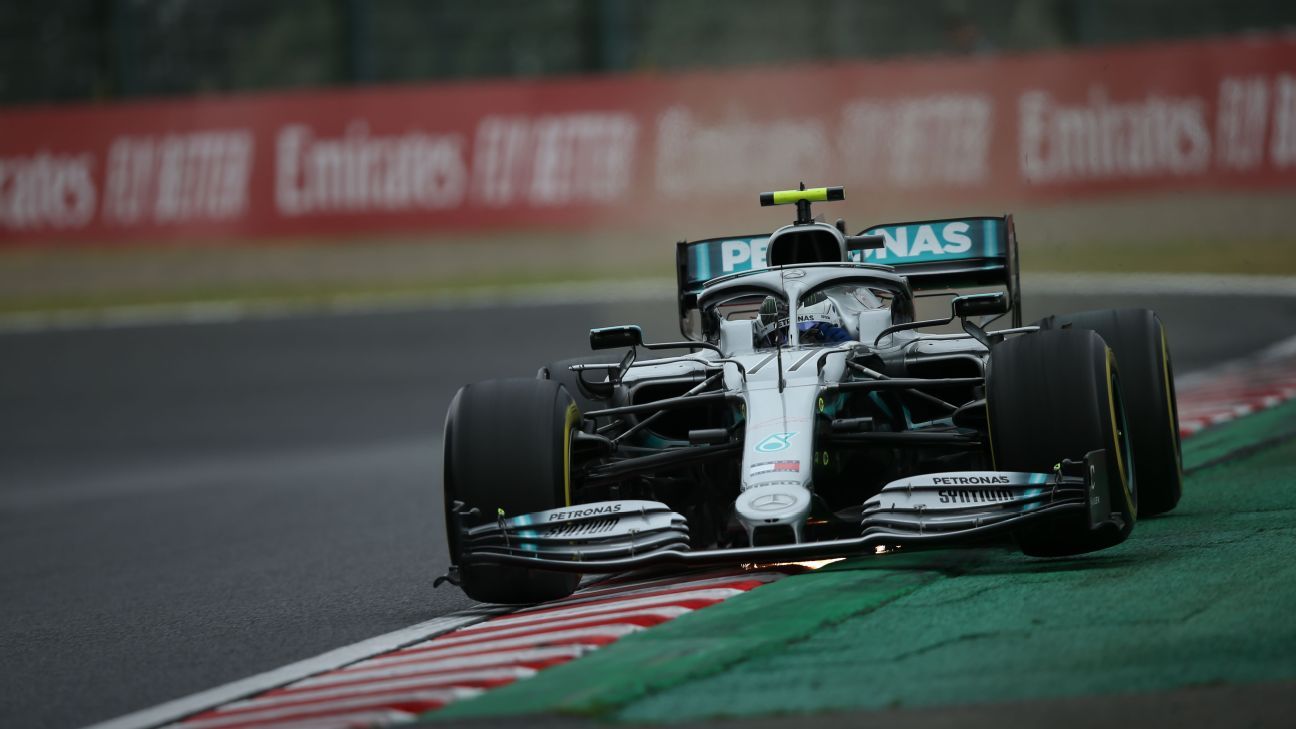 SUZUKA, Japan — With Typhoon Hagibis disrupting Formula One’s usual race weekend schedule, Friday’s second practice at Suzuka could prove to be the most significant practice session of the season. With qualifying cancelled on Saturday — and still under threat in its rescheduled time on Sunday morning — the teams were told ahead of FP2 that the classification for the second practice session would determine the grid if the storm prevents qualifying being run altogether.

Valtteri Bottas rose to the challenge on Friday afternoon to finish the session fastest and secure a very provisional pole position as it became clear Mercedes holds a significant advantage over the rest of the grid at Suzuka. The result was something of a surprise given Ferrari’s resurgence at the last four races, but acted as a reminder that at certain types of circuit there is no substitute for a car smothered in downforce. What’s more, the Mercedes featured its first significant aero update since the summer break, helping the team extend the inherent advantage its car was always likely to have at Suzuka even further.

The fast, flowing corners that make up the remarkable Suzuka lap are a world away from the right-angle, stop-start corners of Singapore and Russia, playing to the strengths of the Mercedes cars and highlighting Ferrari’s weaknesses. Ferrari still maintained the straight-line speed advantage it has had all year, albeit not as large as at recent races, but it wasn’t enough to compensate for the sheer pace of the Mercedes in the corners. Ferrari’s car has come a long way in a short period of time, but there was little doubt after Friday practice that Mercedes still has the best all-round package at this circuit.

In the battle between the Silver Arrows, championship leader Lewis Hamilton finished the session exactly 0.1 seconds off teammate Bottas. The five-time world champion loves Suzuka, but admitted it is not one of his best circuits in terms of raw lap time, and he is hoping he gets another shot at a qualifying time on Sunday morning.

“Valtteri got a massive tow on his fastest lap and gained like half a second up the back straight, so it’s an interesting dynamic. You don’t want to be behind someone through the first part of the lap, because you need clean air [through the high-speed corners] but if you are lucky and you get a slipstream later on, it’s perfect.”

Soft tyres on, engines turned up

The complete cancellation of final practice, usually held on Saturday morning, meant the teams also had two extra sets of tyres to play with on Friday. The extra rubber made FP2 seem even more like a qualifying session as drivers got two attempts at a quick lap on fresh, soft tyres, rather than the usual single lap. Mercedes and Red Bull opted to do the two single laps in quick succession around the hour mark of the session before moving on to long runs.

“It’s been more interesting than a normal Friday as we have had to adjust from the normal programme with the poor weather expected tomorrow,” Mercedes trackside engineering director Andrew Shovlin said. “We’d already decided to bring a Saturday tyre set into Friday morning, even before we heard that all Saturday running was cancelled. That allowed us to do a bit more setup work than normal and it gave the drivers a bit more experience at low fuel.

“We then heard that the best times from the second session would be used to form the grid if qualifying cannot take place on Sunday morning. That meant we wanted to get decent times on the board, so we turned the power unit up a bit and had to run lower fuel than we would normally run.”

Ferrari had a different strategy to its rivals and split its two fast laps on fresh tyres, with one at the hour mark and one at the very end of the session. The motivation was clear: as the session progressed, more rubber would go down on the track and, in theory, the circuit would offer up faster laps. The reality was somewhat different as both Charles Leclerc and Sebastian Vettel found themselves going for quick laps, while most of the rest of the cars continued on race simulations. The extra 80-100 kg in fuel between the cars on long runs and the cars on qualifying-style laps equated to a lap-time difference of roughly six seconds and, unsurprisingly, both Ferraris hit traffic on a circuit full of race simulations. Although Leclerc and Vettel both improved on their previous times, the feeling was that there was more in the car than their final lap times suggested.

“Yeah, we tried,” Vettel said, when asked if he was pushing for a qualifying-style lap. “I got stuck in traffic. The track maybe didn’t do the step that we expected. But we tried.

“But I think we were quite OK — just lacking overall pace. I think Mercedes was very comfortable straight from this morning, so not a surprise they were able to show that again in FP2.

“For us, I think we have a bit of room to improve. It wasn’t an ideal session, maybe using our tyres not the way we could have.”

Red Bull arrived in Suzuka with minor aero updates and a fuel upgrade to combine with the fresh engines they added to their power unit supply in Russia in order to avoid a grid penalty on Honda’s home turf. As a combination, it appeared to work well and Max Verstappen secured third place, 0.281s off Bottas’ pace and 0.075s clear of Leclerc’s time late in the day. “I wasn’t totally happy with the balance initially today, but we improved a lot from FP1 to FP2, which you can see from the lap times this afternoon,” Verstappen said.

“There are still improvements to be made and Mercedes are looking very strong, which is no surprise on this track, but we made a good recovery from this morning. The new fuel also seems to be a good step forward in terms of power, which is really positive.”

Mercedes’ impressive single-lap pace was underlined by their advantage on heavy fuel at the end of the session. Ferrari’s late push for a quick lap slightly skews the picture, but there was no arguing with the average 0.8s-per-lap advantage Bottas had over Leclerc on like-for-like long runs on the soft tyre.

Much like the one-lap pace, Ferrari’s battle appears to be with Red Bull rather than Mercedes, with Verstappen holding a small edge over Leclerc on similar race simulations.

“It seems we are lacking pace this weekend, which is a bit of a surprise, because we were very strong in the last four races,” Leclerc said. “We expected to be quite good here, but it’s less this case now we are here. We will be working to prepare at its best for qualifying on Sunday.”

More answers to Ferrari’s struggles will arrive on Sunday, assuming the conditions and destruction caused by Typhoon Hagibis allow for qualifying and the race to go ahead. In the meantime, engineering meetings will move to hotel rooms around the Suzuka area before the teams will be allowed to return to the track from 5:00am on Sunday, so that the show can — hopefully — go on.

“We’re going to be working our normal schedule tonight so that the cars are ready for a Sunday morning qualifying when we leave here around midnight,” Shovlin added on Friday night.

“We’ll be packing down some of the equipment tonight to avoid it getting damaged in the typhoon, and making sure the cars and garage kit are safe from damage if we get a flood.

“We may not be allowed into the circuit tomorrow, so that will mean having some meetings at the hotel to prepare for a very busy Sunday. It’s always quite difficult to deal with both qualifying and race in a day but the challenge is good fun and we’re looking forward to it. We hope everyone stays safe tomorrow and that the circuit survives the storm, so we can put on a good show for the fans on Sunday.”