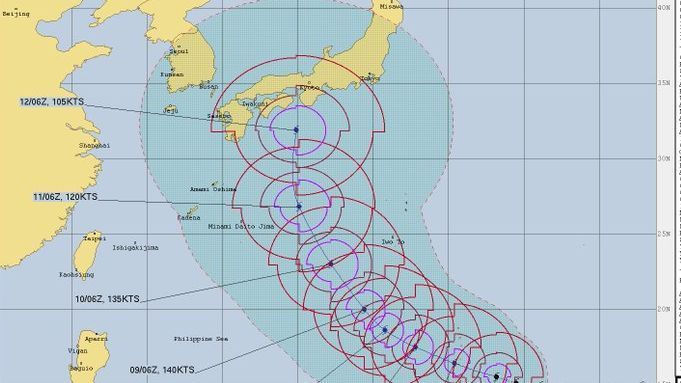 The imminent arrival of Typhoon Hagibis in Japan has wreaked havoc with the weekend’s sporting schedule. World Rugby announced Thursday it was cancelling two of Saturday’s three Rugby World Cup pool matches while Sunday’s quartet of games are under threat.

Never before has a World Cup match been cancelled, but with the category-five typhoon set to hit Tokyo on Saturday, World Rugby has taken pre-emptive steps. We are in unchartered territory for the sport and here’s the latest on what these decisions mean for the World Cup and this weekend’s Formula One action in Suzuka.

What decision was made?

With the plotted path of Typhoon Hagibis seeing it come into contact with Tokyo on Saturday, World Rugby had to consider the safety of fans and players while also factoring in the logistical implications of this huge storm hitting the capital while there were games due to take place.

England-France was set to be played in Yokohama, while New Zealand were meant to be taking on Italy in Toyota. Having consulted the Japan Meteorological Agency and other experts, World Rugby took the decision to cancel both England-France and New Zealand-Italy. Ireland-Samoa remains on as things stand, as it is being played in Fukuoka and is likely to be spared from the worst of the typhoon.

There are four matches etched in for Sunday with Japan’s game against Scotland in Yokohama the standout match as both teams chase a spot in the quarterfinals. World Rugby will decide on Sunday morning whether this game and the other three (Namibia-Canada, Wales-Uruguay, USA-Tonga) go ahead.

What does this mean? Who wins and who loses?

On the rugby side of things, the decision to cancel both matches 48 hours out without any option of relocation or postponement has caused uproar. World Rugby bosses say the teams agreed to the stipulations before the start of the tournament where if a pool match cannot be played on the day it’s meant to take place, then it is cancelled.

The governing body did look into relocating some matches, but ran into logistical difficulties with a number of the previously used stadia no longer under tournament control. It was therefore decided a blanket approach was needed so if one game could not be relocated and was cancelled then the same decision-making process would be applied to the others under threat from the typhoon.

The decision means England now top Pool C and France go through as runners-up as the cancelled match is written off as a scoreless draw meaning both teams get two points. The upheaval in Pool C is minimal and England have already spoken of how they are pleased to have extra time to focus on their quarterfinal match which is likely to be against Australia.

For the All Blacks, Steve Hansen called the decision a “no-brainer” but Italy were left devastated by the announcement. They still had slim hopes of progressing to the knockout stages (needing a bonus point win over the All Blacks) but the cancellation not only saw them cemented third in their group and out of the World Cup but robbed some of their experienced statesmen of one last run out for the Azzurri.

Head coach Conor O’Shea was upset at seeing the likes of Sergio Parisse and Leonardo Ghiraldini finish their Italy careers on the training paddock, rather than on the field, while Parisse hit out at World Rugby for their lack of a contingency plan and controversially argued the game would not have been cancelled had it been the All Blacks needing a win.

Italy head home with that horrible feeling of ‘what if’ and Scotland are doing all they can to avoid a similar fate. Scotland need a big win over Japan to qualify for the knockout stages at the expense of the hosts but they know their fate lies firmly in the lap of the weather Gods.

If their game is cancelled, then as things stand they will be knocked out of the World Cup and Japan will progress. Scotland are hopeful of finding some alternative contingency plan — perhaps playing the game later in the day, on Monday or at another venue — but World Rugby appear steadfast in their decision-making process that would see the game cancelled if it could not be played at Yokohama on Sunday.

The key timing here is 11.45 local time (03.45 BST) with World Rugby having to announce whether the game is going ahead at the latest six hours before the match is due to start.

What about the Formula One?

The situation around this weekend’s Japanese Grand Prix, held at the Suzuka circuit south of Nagoya, is still up in the air. Qualifying for the race is due to take place on Saturday afternoon, with the race held 24 hours later on Sunday.

If the current forecast holds true, the conditions would rule out running on Sunday — not only presenting a safety risk for drivers but also for fans making their way to the circuit.

Two 90-minute practice sessions will take place on Friday. A decision will be taken at some point that day about the status of Saturday’s session once the threat of the weather has been assessed.

A cancellation of qualifying would see it held on Sunday morning ahead of the race. To cancel qualifying a day ahead of time, the agreement of the Suzuka circuit and the Japanese Automobile Federation is needed, although motor racing’s governing body, the FIA, ultimately has the power to postpone the sessions on safety grounds.

The Suzuka race has precedent in this department. In 2004, Typhoon Ma-on, a tropical cyclone that was comparable in size to Hagibis, prompted a decision on Friday evening to postpone qualifying. In 2010 the bad weather was not caused by a typhoon but track conditions were still deemed to be too bad to continue on Saturday afternoon, leading to the session being rescheduled for Sunday. In the 2014 race, Jules Bianchi crashed in heavy rain from Typhoon Panphone and died from his injuries the following year.

While postponements are already shaping the next stage of the Rugby World Cup, moving qualifying would be more of a logistical problem than one which altered the competitive balance of power too dramatically. One issue this could throw up is the short time between a Sunday qualifying session and the race, leaving any team very little time to fix a car if one of its drivers crashes in the morning.

The Formula 4 support series has already had its sessions cancelled this week to free up any potential schedule changes for F1.