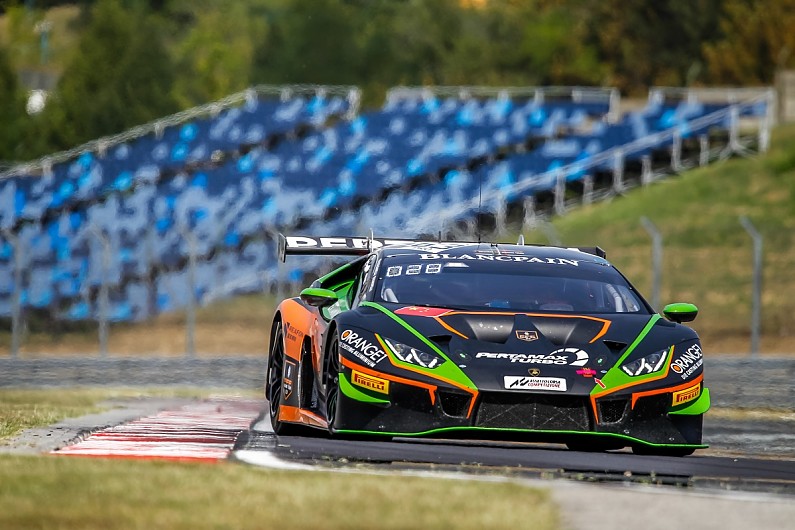 The Lamborghini duo beat the pairing of Maro Engel and Luca Stolz to the championship after recording two wins to Engel/Stolz’s one.

Championship protagonists Stolz and Mapelli endured vastly contrasting fortunes in qualifying, with the #4 Black Falcon Mercedes joining Marciello on the front row, while Marco Mapelli could only manage eighth in the Lamborghini.

Heavy rain on Saturday meant the field started race one behind the safety car, which allowed Marciello an easy run into Turn 1 on the first racing lap.

Stolz followed closely behind from Bortolotti and the R-Motorsport Aston Martin of Ricky Collard.

Collard was muscled out of fourth by the Audi R8 of Kelvin van der Linde, dropping the Aston to seventh.

Bortolotti then began closing onto the back of Stolz for second as Marciello broke clear in the lead.

The #63 Lamborghini forced his way past the Black Falcon on exit of Turn 2 as the pair made slight contact.

The order remained unchanged following the compulsory driver-change pit-stops with Engelhart – now in charge of the #63 – keeping the pressure on Abril. 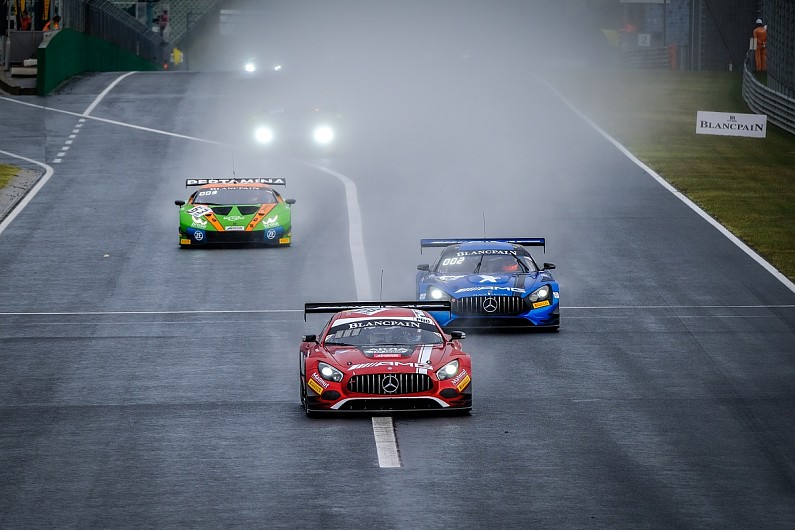 The Lamborghini began to struggle for grip as the wet track began to dry in the closing stages, and this allowed Engel – the fastest man on track – to close right onto the back of the Huracan in pursuit of second.

Engelhart was resolute in defence and looked to have secured his position, but Engel eventually sliced past Engelhart around the outside of Turn 9 to claim a dramatic second on the final lap of the race.

The #563 Huracan of Mapelli and Caldarelli finished a distant fifth after a subdued race.

Caldarelli took over from Mapelli and was rapid in the FFF Racing machine, but could not make as much progress up the field.

The Italian got past the Aston Martin of Hugo de Sadeleer for fifth but that was all he could manage as the points lead was cut by five points.

Sunday’s finale was a dry affair throughout and it was once again the #88 Akka ASP Mercedes which proved the car to beat.

Abril maintained his lead from the start as Engel leapt a position to run third at the first corner.

The #563 – having started a lowly 13th – made steady progress and gained a position as Dries Vanthoor dropped to the back of the field following a puncture while fighting Sven Muller for fourth.

A charging Caldarelli then made his way up to eighth after a daring round-the-outside move on the Silver Cup Mercedes of Nico Bastian which resulted in slight contact.

Fast pit work from the FFF Racing crew then handed Mapelli a further two places as the #563 emerged in front of both the Audi R8 of Mies and the Porsche of Muller to put it into a championship-winning position.

Engel changed with Stolz, with the latter piling on the pressure on Engelhart for second.

Agonisingly for Stolz and Engel, the #4 could not find a way past Engelhart and instead had to defend the final laps from the #563.

Marciello and Abril consolidated their lead and duly took their third win of the year by over 16 seconds from Bortolotti and Engelhart, with the Mercedes duo leapfrogging their GRT rivals for third in the standings.

FFF Racing celebrated another title in the Pro-Am category as Phil Keen and Hiroshi Hamaguchi bounced back from a last-lap defeat in race one to secure victory in Sunday’s finale.