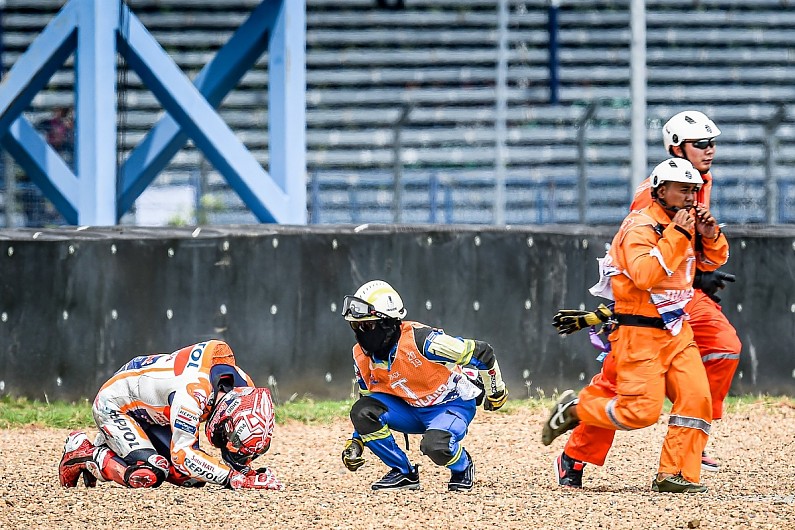 LCR rider Cal Crutchlow says the current performance of Honda’s MotoGP bike on out-laps is “embarrassing”, and believes this played a part in Marc Marquez’s FP1 crash at Buriram.

Marquez was thrown from his RC213V late on in the first practice session at the Turn 7 right-hander while off-throttle, and had to go to hospital for precautionary checks before returning to action in FP2.

Honda boss Alberto Puig told media following FP1 he believes dirt on Marquez’s fresh rear tyre was the cause, with Marquez later admitting that, and the fact he had shut off the throttle completely, were likely to blame.

However, Crutchlow refuted this and believes the fact the Honda has “no grip” on out-laps compared to other bikes prompted Marquez’s crash.

“It’s not a dirty tyre,” Crutchlow replied, when asked what he thought had caused Marquez’s crash.

“I think he didn’t lean enough in Turn 3, but when you come through there and the tyre – it’s a very typical Honda thing – [has] no grip in the out-laps compared to the other bikes.

“If we follow another manufacturer in the out-lap it’s so difficult because we don’t load the tyres the same way.

“He highsided off-gas, and it’s because the weight is not there to push it [the tyre].

“I followed [Franco] Morbidelli on an out-lap in the second run this morning, and honestly it was embarrassing; I might as well have been on a wet track trying to go round the corner the same speed as him, because we [Honda riders] need an extra lap [to prepare the tyre].

“If you have a look in the practices, the first flying lap after we leave the pits on a used tyre is always way different to the next lap.

“We need that extra lap to be able to make the tyre work.” 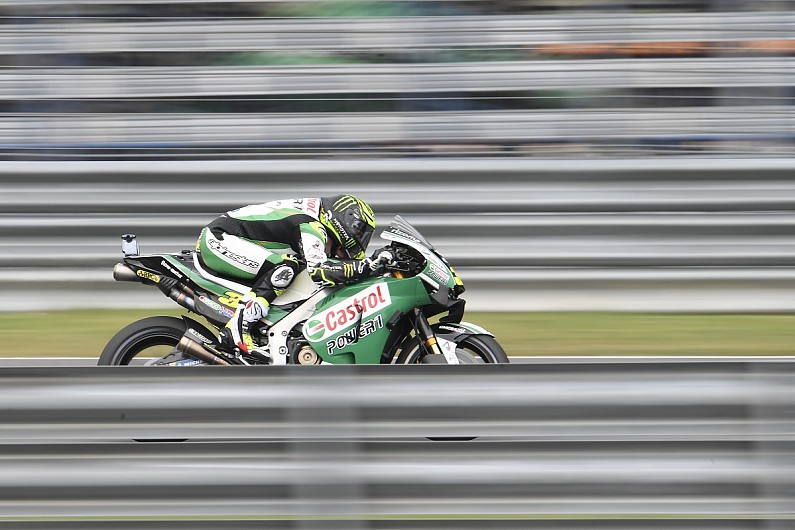 Crutchlow spent Friday battling a tendonitis issue, which he thinks has flared up due to the aggressive nature of the RC213V and MotoGP’s busy recent schedule.

However, be said this had “absolutely nothing to do” with him struggling to 13th in practice despite the issue “just killing me” off-track.

“I have chronic tendonitis in my right arm,” he explained.

“You manage to get rid of it in the end, but you get rid of it with rest and I’ve got four races on the bounce basically from now.

“I tried to rest it after Aragon. It’s the bicep tendon, now it’s gone into the shoulder and I have tennis elbow as well because it’s just all compensating [on the bike].

“The run of Silverstone, Misano test and Misano race all really close and a bike that is not easy to ride [has caused it], it’s as simple as that.”

He added: “Honestly, in the night I can’t sleep, the thing’s just killing me. I can’t lift my bottle of water.

“To ride here is proving quite difficult.”