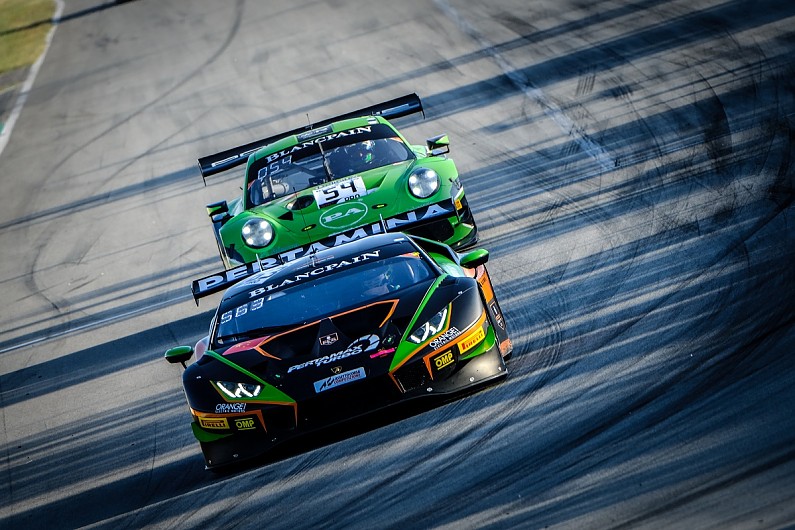 Caldarelli and Mapelli – joined in the #563 Lamborghini Huracan GT3 by Albert Costa, with regular co-driver Dennis Lind out with illness – took their first Endurance win of 2019 and third win in total.

But, having started 13th, Aleshin hit early trouble as the #72 Ferrari 488 GT3 was hit from behind by the Strakka Mercedes of Romain Monti, giving the Russian driver a puncture and dropping the points-leading squad all the way down to 40th place.

A succession of safety car periods allowed SMP to claw its way back into contention, and by the time of the penultimate restart with just over 45 minutes left on the clock, Molina had managed to climb back to 12th.

But SMP’s title hopes were extinguished for good when Molina hit the back of Andy Soucek’s Bentley Continental GT3 at the final chicane, earning a drive-through penalty. 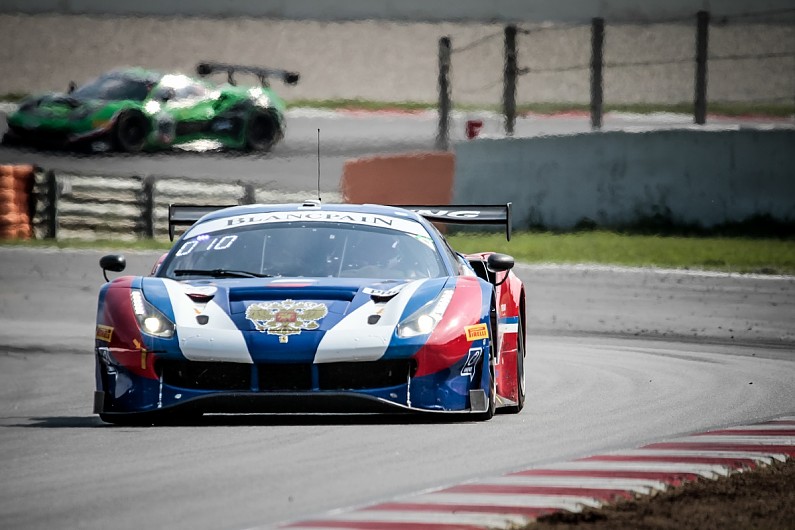 What transpired to be the title-winning move for the FFF Lamborghini drivers came just shy of half-distance as Mapelli went the long way around Stolz’s #4 Mercedes AMG-GT3 at Turn 1 to grab the lead after the second full-course caution.

From there, Mapelli and later Caldarelli were able to manage the remaining restarts, the last one coming with just five minutes left on the clock, as chaos reigned behind.

Stolz, Engel and Yelmer Buurman were on course for second until Buurman was hit by the #2 WRT Audi R8 LMS of Dries Vanthoor at Turn 4 with just under three minutes left of the race, both cars ending up in the gravel.

That promoted the R-Motorsport Aston Martin Vantage GT3 shared by Jake Dennis, Alex Lynn and Marvin Kirchhofer to a surprise podium at the very end, along with the #107 M-Sport-run Bentley of Jordan Pepper, Steven Kane and Jules Gounon.

ASP’s lead car, the #88 Mercedes shared by Raffaele Marciello, Michael Meadows and Vincent Abril was in the running for a podium for much of the race until Meadows was given a puncture by contact with Vanthoor in the final half-hour.

The polesitting #98 Rowe Racing Porsche 911 GT3 R was penalised for leaving the pits in the fast lane after Sven Muller handed over to Romain Dumas, finishing sixth, while Molina brought home the SMP Ferrari in 15th after his penalty.