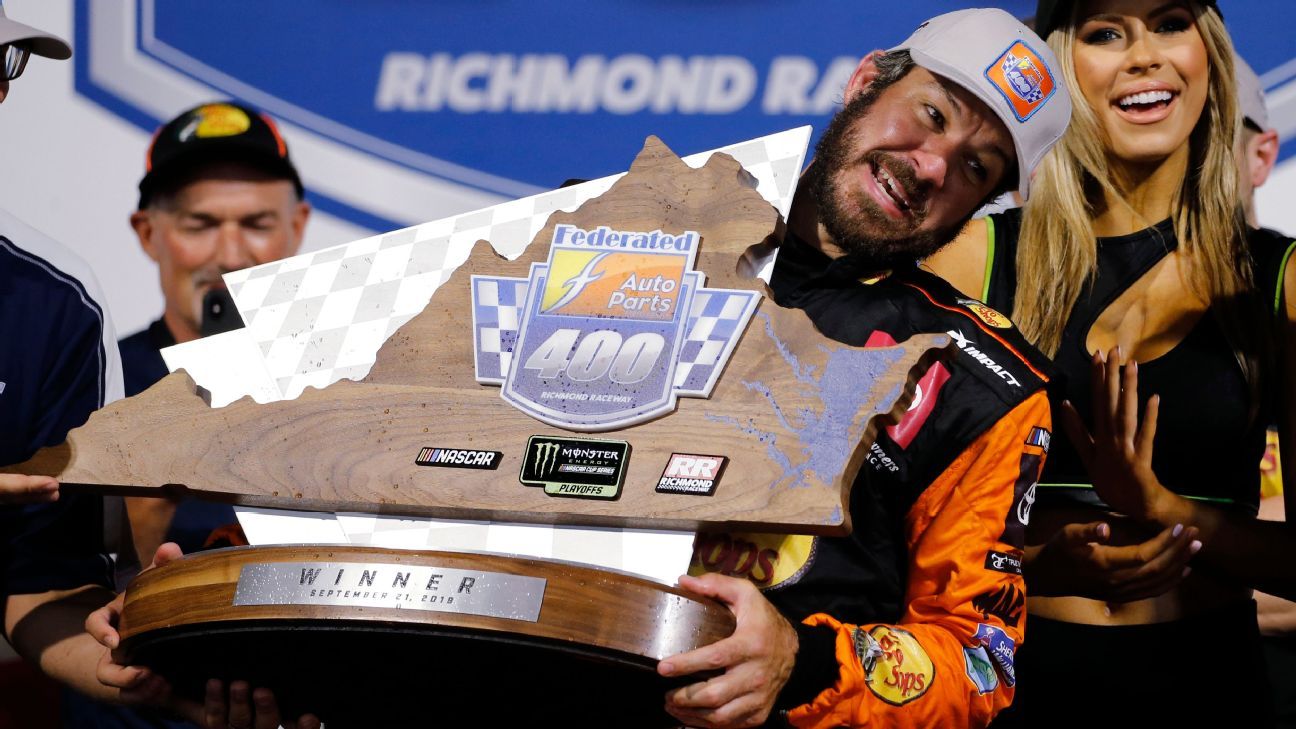 That’s just about as well as the playoffs could start for one Martin Truex Jr. Two races, two wins. With my background as a professional stat guy, I can tell you that’s a 100% winning percentage, and that’s really as high as it goes.

Truex is the fourth driver to start his playoffs with back-to-back wins in the 16 seasons the playoffs have been in existence. In 2011, Tony Stewart won the first two and won a championship. Matt Kenseth did it in 2013 and Greg Biffle in 2008, but they didn’t win the title that year.

Now we’re heading to the Charlotte Roval, and you have no idea how excited I am. Go watch the end of last year’s race 10 or 20 times. In fact, that’s your homework for this column (I assign homework now).

I’ll temper my excitement for just a few moments to recap my favorite notes from the weekend at Richmond.

Not only did Truex win at Richmond, but his Joe Gibbs Racing teammates Kyle Busch and Denny Hamlin finished second and third.

That’s the third 1-2-3 finish by Gibbs this season, they also did it in the Daytona 500 and the July race at Pocono.

JGR is the fourth team to have at least three 1-2-3 finishes in a season. The record is four, last done by Roush Fenway Racing in 2005 (three of those taking place in the playoffs), also pulled off by Carl Kiekhaefer’s team in 1956. The other team with three is DePaolo Engineering in 1957.

Gibbs nearly had a top-four sweep as Erik Jones originally was the fourth-place finisher, but was sent to a last-place finish after failing postrace inspection.

After winning just three times in his first 12 seasons in the Cup Series (10 of those being full seasons), Truex has won 22 times in the past four seasons, with eight races remaining this season to add to that total.

Nobody has won more than 22 races in a four-year span since Jimmie Johnson had 30 from 2007-10. Johnson, of course, won the championship in each of those seasons.

The last to do it before Johnson (who had a few overlapping streaks) was Jeff Gordon, who last did it with 29 wins from 1998-2001.

Truex is chasing more history this season, as he could be the first driver to win multiple championships in the Cup Series and the Xfinity Series. He’s already one of five drivers to win a championship in both series, along with Kyle Busch, Kevin Harvick, Brad Keselowski and Bobby Labonte.

I know I usually use this spot to review last weekend, but I couldn’t resist the urge to talk some roval. Judgment-free zone.

We don’t introduce new tracks to the Cup schedule all that often, so Ryan Blaney has a chance to make some history with winning the first two races on the Charlotte Roval.

He could become the fourth driver in the Modern Era (since 1972) to win the first two races at a track — joining Kevin Harvick (Chicago), Jeff Gordon (Kansas) and Tony Stewart (Homestead).

And if you already want to start prepping some 2021 notes, no driver has ever won the first three races at a single track.