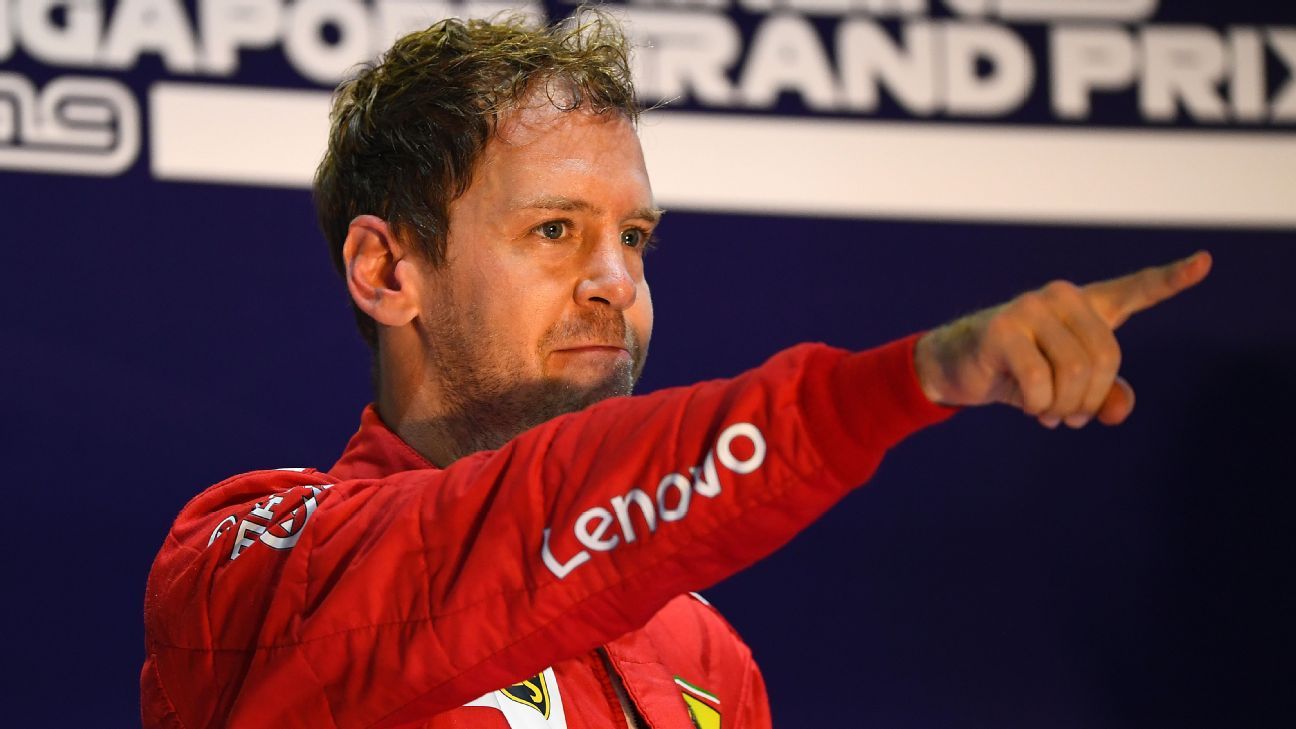 Ferrari’s strategy helped Vettel move from third on the grid to first at the finish in Singapore on Sunday night and secure his first win since the 2018 Belgian Grand Prix in August last year. The period between his two most recent victories was particularly tough for the four-time world champion as he dropped out of contention for the 2018 championship and made a series of costly errors at a variety of races.

As recently as the Italian Grand Prix two weeks ago, he spun out of fourth position and was penalised for colliding with Lance Stroll as he rejoined the track — moving him perilously close to a race ban under F1’s penalty point rules. The error coincided with teammate Charles Leclerc taking Ferrari’s first win on home turf in nine years, which lifted the pressure off the team but piled more on Vettel, who also dropped behind Leclerc in the drivers’ standings.

But Vettel, who is not on any form of social media and maintains a low profile away from the race track, said handwritten letters sent by fans and colleagues helped him cope with the mounting pressure to return to the top step of the podium.

“[I received] a lot of little notes, handwritten letters,” he said. “Obviously if people make the effort to write something, when you find a bit of time in the evenings to go through them, it’s really encouraging I have to say.

“Years ago when I started out, it was very difficult to imagine that people would follow you and these kind of things but in recent years, especially here, especially in Asia, I have had a lot of support, a lot of fans that come over and over again.

“As I said, I just got a lot of energy in the last couple of weeks, just from messages that I received from the racing world, from people that I know from a long time ago, but especially from fans. After Monza, and then coming here.

“People shared their own story of when things are up and when things go down. For us everything is centred around racing, but really it’s not the most important thing and, when you read through some of the notes and people’s struggles in life — some very intimate and private — you know it gets to you.

“It gave me a lot of belief and confidence to just keep trying. Obviously nothing was wrong in the last couple of weeks. I knew that we weren’t really far away from a breakthrough moment, sort of. But Charles had been very strong, and was right to win the last two races — but I knew on our side that we just need to keep doing our job and sooner or later things would fall in to place.”

Vettel still has one year left on his Ferrari contract, but his run of poor form over the past 12 months has led to speculation that he might leave the team or leave F1 altogether.

Asked if there was a sense of relief now that he has won again, Vettel said: “Yes, in a way maybe it kicks in a bit later but yeah, maybe just a confirmation that if you keep doing what you do [it will come good]. There are moments where you know that things are wrong and you need to make changes, but lately I didn’t feel that any big changes were necessary.

“In that regard it’s a confirmation but it’s not like ‘finally I can breathe again’. It’s not like I felt in a wrong and bad place. I knew that I have to pull through and go through it myself.”