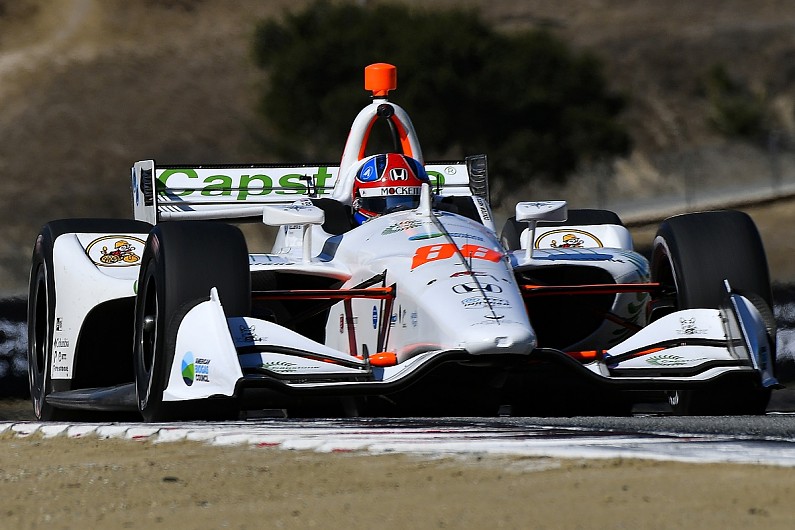 Colton Herta claimed the third pole of his rookie IndyCar campaign by beating championship contenders Scott Dixon and Alexander Rossi in qualifying at the 2019 season finale at Laguna Seca.

That lap was over four tenths of a second quicker than Dixon’s best time.

Rossi, who comes into this weekend second in the standings, was 0.7s behind his future team-mate in third, but crucially he qualified ahead of current points leader Josef Newgarden.

Newgarden locked up and ran wide at Turn 2 on his final fast lap, which scuppered any chances of a front row start for the 2017 champion and he ended up fourth.

James Hinchcliffe got amongst the title contenders to qualify fifth, beating Simon Pagenaud, who had a tricky run in qualifying.

The 2019 Indy 500 winner went off track twice in the second part of qualifying but nevertheless scraped through to the pole position shootout.

Pagenaud was one of three drivers, along with Dixon and Rossi, to complete four laps in the last segment, but he never troubled the top of the timesheets.

Outside of the top six, Will Power missed out on a chance to battle for pole by just 0.006s, and he will start seventh, ahead of Graham Rahal and Ryan Hunter-Reay.

Max Chilton completes the top 10, ahead of rookies Marcus Ericsson and Santino Ferrucci, with Conor Daly in 13th.

Felix Rosenqvist was classified 14th after a controversial incident in the opening qualifying session.

The Chip Ganassi Racing driver, who was an early favourite for pole, spun on the Rahal straight.

While the incident did not bring out a red flag, he was judged to have impeded Hinchcliffe in and had his two fastest times cancelled as a result.

His third fastest time ended up being just 0.01 seconds adrift of advancing him to the second stage of qualifying.

But Rosenqvist did manage to better Spencer Pigot, Takuma Sato, Zach Veach, and Sebastien Bourdais, who had aggravated an old back injury ahead of qualifying.