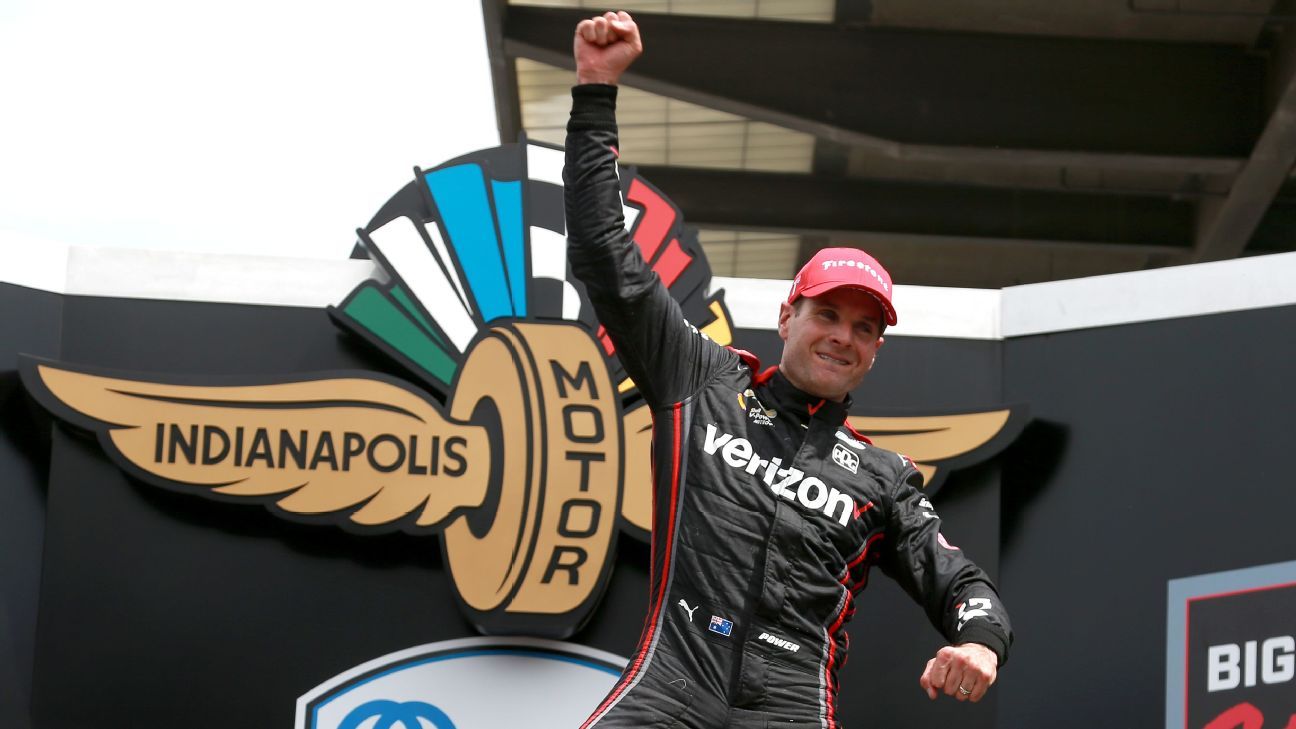 He found it in a familiar spot — on Indianapolis Motor Speedway’s road course.

Just six days after enduring one of the most frustrating races of his career, Power took an early lead, pulled away from the field and held on for his first IndyCar win of the season, beating Romain Grosjean to the yard of bricks by 1.1142 seconds.

“Big relief, big relief, especially for my guys on the team,” Power said. “I just told myself, ‘I’m getting this bloody restart, there’s no way I’m giving this race away.’ “

It was a milestone trip to victory lane, too.

His 40th career win broke a tie with Al Unser for fifth on the series’ all-time list. Power also matched NASCAR star Kyle Busch‘s record for wins at IMS, the speedway and road course combined, with his sixth. Busch has four wins in the Xfinity Series and two in Cup on the famed Brickyard oval. Power, who won the 2018 Indianapolis 500, has won five times on the road course, equaling the mark former Formula One champion Michael Schumacher set in the U.S. Grand Prix.

And the Australian, who started second, desperately needed this one.

Last weekend at Nashville, Power finished 14th, squeezing one teammate, Simon Pagenaud, into a wall early in the race and later colliding with another teammate, Scott McLaughlin.

“Certainly, the incident with McLaughlin was not good,” Power said. “I didn’t see Roger (Penske) after the race. I thought, ‘I need to win a race before I speak to him again.’ Fortunately, I did that.”

It came with some consternation.

After building a 9.5-second lead midway through the race, Power got hung up in traffic as Grosjean and Colton Herta chased him. Both closed to fewer than four seconds when the first of two late cautions came out because points leader Alex Palou of Spain appeared to blow an engine.

That bunched up the lead pack and gave both cars a chance to pass. Herta never got close on the restart on Lap 71.

“I don’t really think we had anything for Power or Grosjean, so we’re happy with third,” Herta said.

Instead, Power started pulling away again only to see another yellow come out.

This time, Power got a huge jump, and with Grosjean out of the extra push-to-pass boost, nobody got close to the 2014 series champ.

“I thought it was a good fight,” said Grosjean, who finished second for the second straight time on Indy’s road course. “He went early and we just couldn’t quite keep up with him.”

American Alexander Rossi was fourth and Mexico’s Pato O’Ward, the pole-winner, finished fifth – well behind Power, who led 56 of 85 laps and finally got to celebrate.

Palou looked like he was going to pad his points lead when he was running fourth with 17 laps to go – well ahead of second-place Scott Dixon. Then, suddenly, a puff of smoke appeared from the back of the No. 10 Honda and the powerless car rolled to a stop.

“It’s a shame when you’re running so good,” Palou said.

With Palou finishing 27th in the 28-car field, everybody else made up ground. O’Ward passed Dixon for second, 21 points behind. Dixon, who started with a 42-point deficit, now trails by 34, and two-time series champ Josef Newgarden remained fourth, 55 points behind.

“The big positive today, unfortunately for Alex I think his engine blew, and that gave us a massive jump in the points,” O’Ward said. “Today we just didn’t have it. I’m glad we didn’t finish on the podium because we didn’t deserve it.”

Power wasn’t happy about being in traffic when O’Ward was warming his tires in Friday’s qualifying, and he wasn’t any happier about James Hinchcliffe racing him to stay on the lead lap.

After six-time series champ Scott Dixon spun Chip Ganassi’s No. 9 Honda on his final lap in qualifying, things didn’t get any better Saturday.

He started 26th, in the second-to-last row, and the New Zealander thought he could make up ground with pit strategy. It didn’t work. After being the first driver onto pit row just 10 laps into the race, Dixon wound up finishing 17th in a race that had only the two late yellow flags.

QUOTE OF THE DAY

“You look at the stats, for sure, and you’re aware how far off I am from Mario (Andretti) for all-time poles. And I know Michael Andretti has 42 wins,” Power said. “Two heroes of mine and two absolute legends of the sport, it just blows my mind that I’m close to them,.”

The series returns to action next Saturday in suburban St. Louis – its third straight race weekend since taking a one-month break.