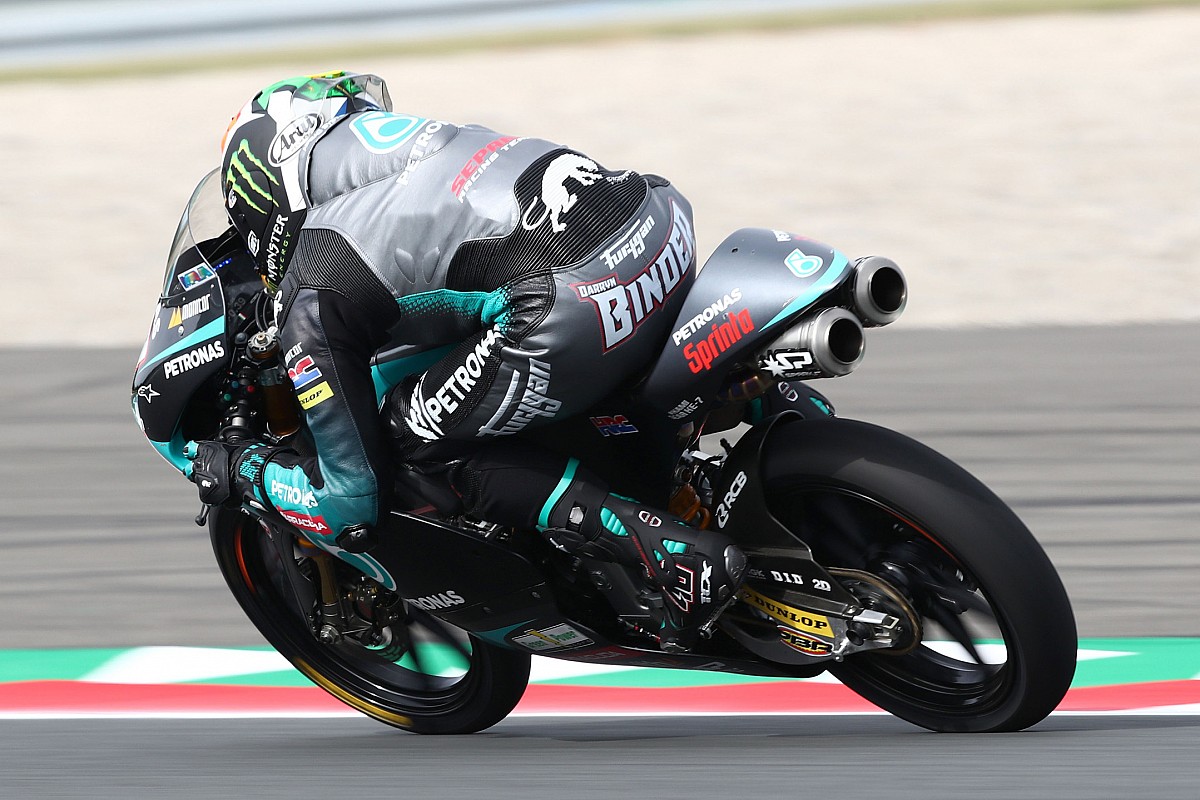 Maverick Vinales’ decision to quit the factory Yamaha team at the end of the current season back in June means Franco Morbidelli will almost certainly be promoted to replace him in 2022.

With Valentino Rossi announcing his retirement from racing last week, SRT now must find two riders from a pool that has almost run dry in recent weeks.

Its preferred option was star Moto2 rookie Raul Fernandez, but KTM locked him into a two-year deal to step up to MotoGP with Tech3 next year – a move that has rankled the young Spaniard.

The back-up option was Rossi protégé Marco Bezzecchi, but the Italian is now on course to join the VR46 Ducati team in 2022 alongside Luca Marini.

On top of that, prime options from World Superbikes in Toprak Razgatlioglu and Garrett Gerloff – who raced for SRT in place of Morbidelli at Assen – appear to have been wiped off the table after penning new deal with Yamaha in WSBK. 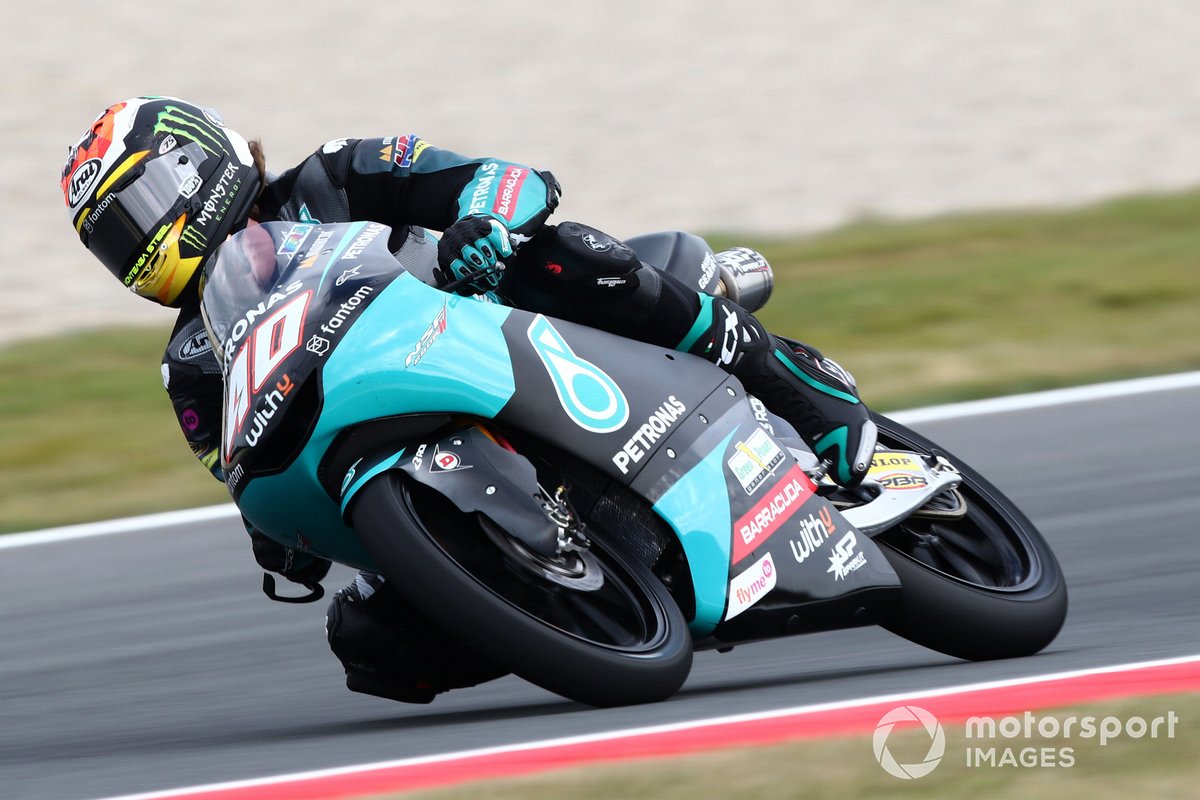 It is thought Gerloff’s contract will allow him to go to MotoGP in 2022 if he is offered a seat, but Autosport understands Yamaha will only be supplying SRT with ‘B-spec’ bikes next year and not factory-supported M1s.

Couple this with the bombshell reported by Autosport on Thursday night that Petronas will withdraw its title sponsorship of SRT next year, the team doesn’t have a large budget to hook big names.

With its Moto2 and Moto3 teams also to be scrapped in 2022, SRT going forward loses its junior ladder to MotoGP.

But its 2022 line-up may well feature at least one of its current junior riders in the form of Moto3 race-winner Darryn Binder, younger brother to KTM rider Brad.

In another twist in the ‘silly season’ story for 2022, SRT could well be promoting the younger Binder brother straight from Moto3 to MotoGP.

Perhaps unsurprisingly, Brad Binder is confident in his brother’s ability to make the leap should it happen.

“At the moment, obviously I’ve heard the rumours,” Binder said on Friday ahead of the Austrian Grand Prix. “But I’d really love to have my brother on track with me, that’s for sure, and if that can become a reality it would be super, super cool for us. I think it’s quite a step for sure, but I believe he’ll do a good job anyway.” 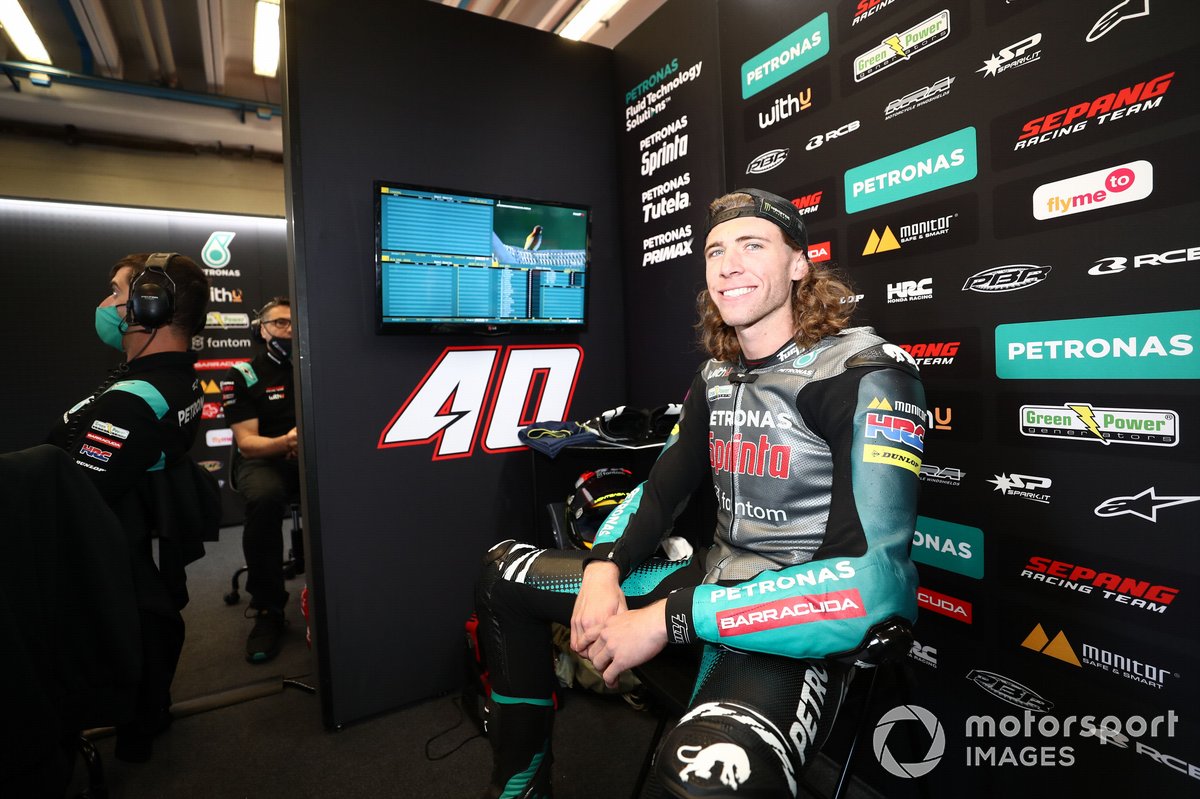 In 2015, Honda put Jack Miller on a three-year contract and promoted him to MotoGP with the LCR team after finishing runner-up in the Moto3 standings to Alex Marquez in 2014 with Ajo KTM.

There are, however, some quite major differences. For starters, Miller was in just his third year of grand prix racing when he mounted a charge for the title in 2014.

Miller was solid across the 2013 season on the FTR Honda before Aki Ajo moved him into his squad – a major opportunity Miller didn’t squander, winning six grands prix to Alex Marquez’s three and missing the title by just two points.

Binder is currently in his seventh year of Moto3 and has won just once, at Barcelona last year, while a big-time shot with Ajo KTM in 2018 netted him just one podium and a disappointing 17th in the standings.

In 2021, after a strong start to the campaign in Qatar with back-to-back podiums, Binder hasn’t reached the rostrum since and his title hopes have pretty much vanished at 104 points off runaway leader Pedro Acosta in sixth.

SRT, at this point, clearly have not a lot to lose. Its main backer is quitting, it will have lesser machinery to the majority of the grid (by modern MotoGP standards, anyway) and it’s riders in Moto2 – Jake Dixon and Xavi Vierge, who have also been linked to MotoGP moves with SRT – have hardly set the world on fire enough to make them any more of an attractive prospect.

In the same gesture, Binder himself has nothing to lose. A step up to MotoGP is a massive ask from Moto3, but Moto2 is a class that’s easy to get stuck in and can completely kill your career trajectory in MotoGP.

Miller was put onto the woefully underpowered Open class RC213V-RS for his first season and managed just 17 points and no top 10 finishes in 2015. Miller’s on antics on and off-track only seemed to make his direct promotion from Moto3 look like an experiment that was failing. 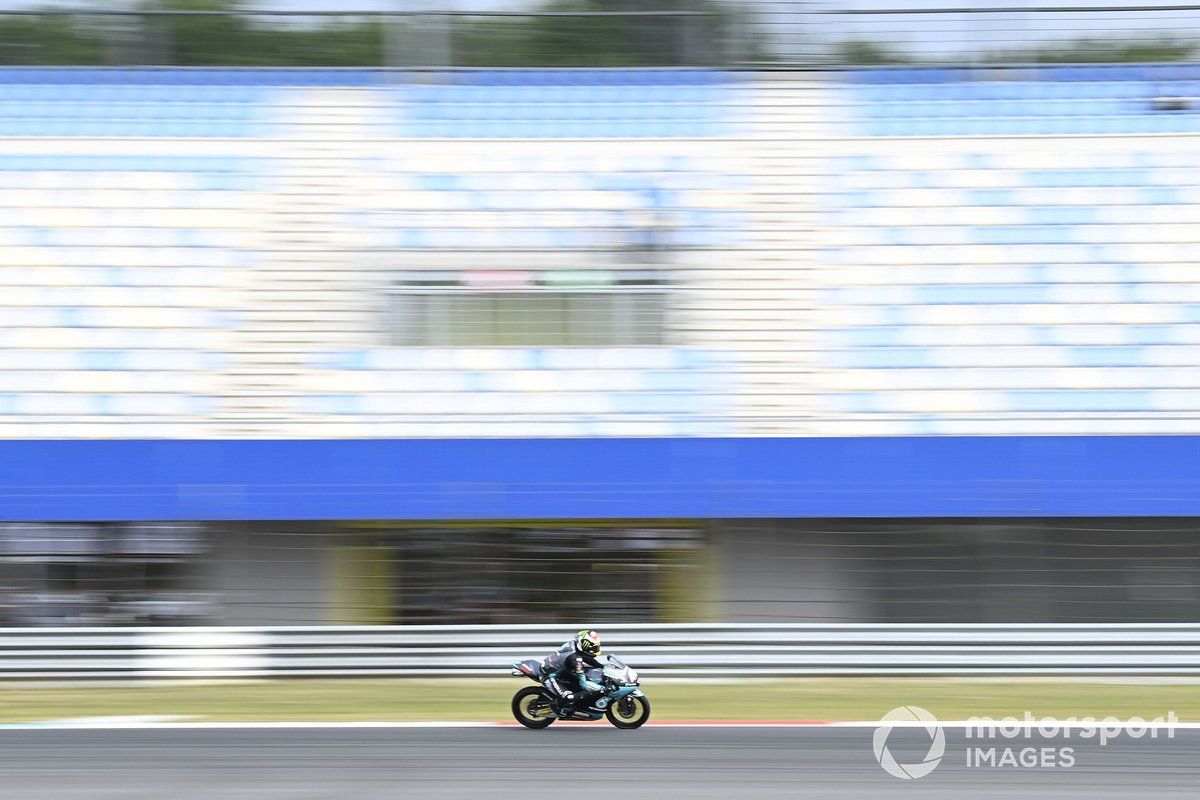 However, over the ensuing years Miller cleaned up his act. He won the wet and wild Dutch TT in 2016 with Marc VDS, this time on a proper Honda prototype, before moving to Ducati with Pramac in 2018. From 2019 he was a factory-backed Ducati rider and in 2021 has taken two victories as he spearheads the factory Ducati team’s efforts alongside Francesco Bagnaia.

Miller himself says Binder should grab the opportunity if it’s there, because it may never come again. And he’s not wrong. In 2015 Danny Kent was linked to a Pramac Ducati ride for 2016, another to be plucked directly out of Moto3. Instead, after winning the 2015 Moto3 title, Kent returned to Moto2 (having spent one disastrous year in the class in 2013 with Tech3) with Kiefer Racing. He would quit the team after three rounds in 2017, MotoGP a distant dream by this point. Now racing in British Superbikes, Kent is lucky to have a career still after being handed a suspended jail sentence for a knife offence in 2019.

But more than simply being a case of get it while you can, Miller also genuinely believes Binder’s talented enough to race in MotoGP. He also thinks the situation he faced in 2015 will be completely different, as the bike Binder will receive – though likely to be at least a year old – is still a much stronger package than the Open Honda he first rode. And remember, Morbidelli came to within 13 points of the 2020 title on a 2019 Yamaha.

“Not a fan, don’t want anyone stealing my thunder,” Miller joked when asked by Autosport if he would advise a Moto3 rider to make the jump to MotoGP.

“For sure. Someone like Darryn Binder, if he’s got the opportunity then why not? I think he’s got balls, that’s for certain. He’s got skills, that’s for certain. So, for sure. If you’ve got the opportunity, if it comes knocking you can’t turn it away because that train only comes once or twice and some people don’t even get it. So, if you do have the chance you’ve got to take it.

“It’s completely different to what I did because when I stepped up and I stepped into the Open Honda and then had to build my way up, whereas now you come in and get a pretty decent machine straight up, which is half the battle. So, I think all power to him if it’s going to happen.”

And if any team is going to transform a rider’s career in MotoGP, it will be SRT. Its decision to bring Fabio Quartararo up from Moto2 after an underwhelming grand prix career up until his first win at Barcelona in 2018 was scrutinised. But SRT management still saw the rider who dominated the CEV Moto3 championship in 2013 and 2014 and knew it could coax the talent out of the one many labelled as the next Marc Marquez when he first joined Moto3 in 2015.

Quartararo is now a six-time MotoGP race winner, was seen by Yamaha as the heir to Rossi’s throne and promoted him to its factory squad in his place in 2021, and he now leads the championship by 40 points in 2021.

Both Binder and SRT will be taking a gamble if the South African’s promotion from Moto3 does come about, but one could also argue it’s a move which has enough shielding to not be damaging for both parties. If it doesn’t work, SRT can blame a lack of Petronas funding and lesser machinery from Yamaha for an experiment it knows can work not panning out, while Binder has the same cover.

SRT confirmed on Friday in Austria it will make its plans for 2022 clearer by the British GP weekend at the end of August. 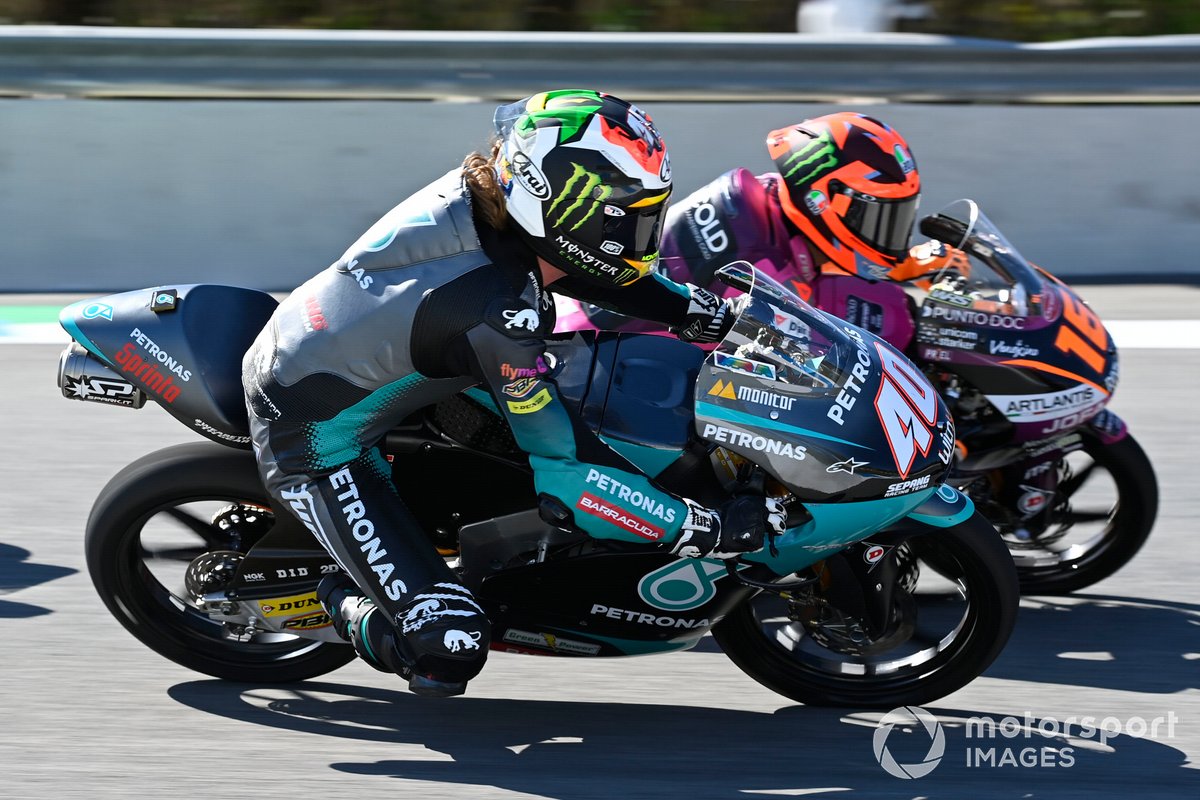