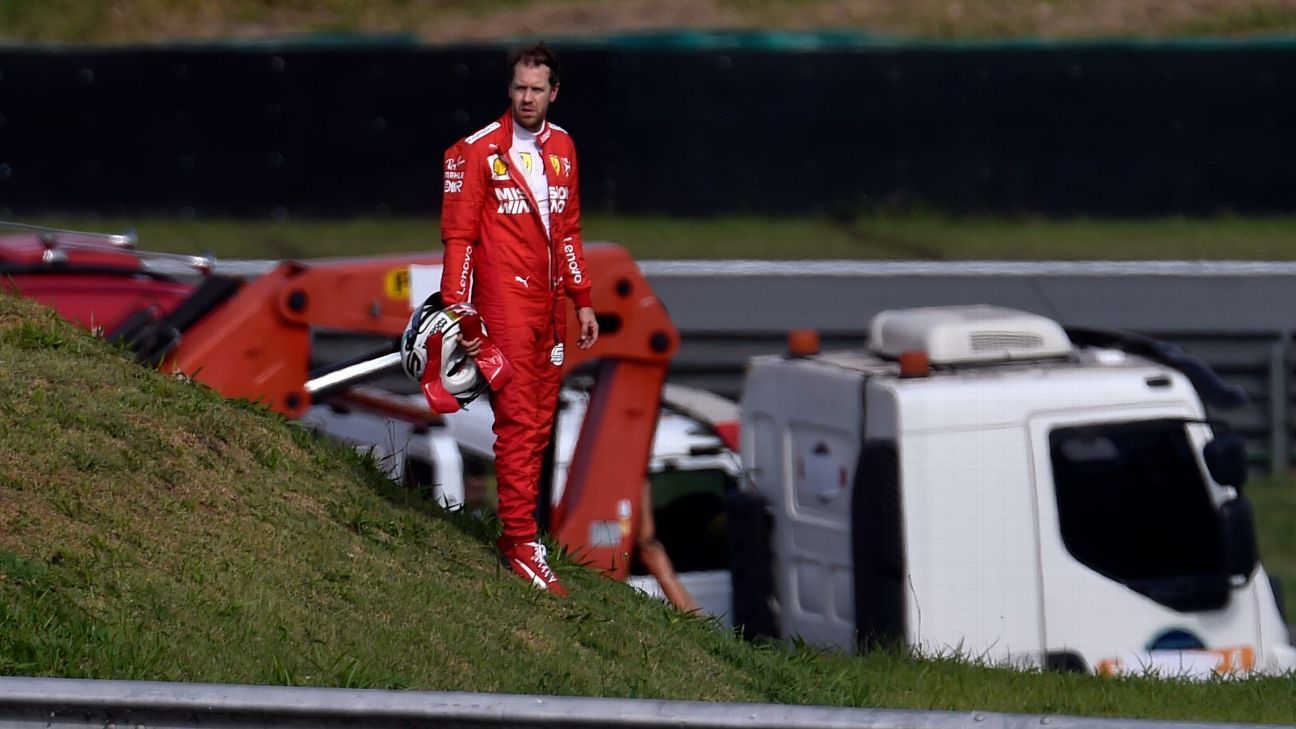 SAO PAULO, Brazil — Ferrari teammates Sebastian Vettel and Charles Leclerc will have to explain their collision at the Brazilian Grand Prix in a special debrief on their return to Maranello.

Both drivers failed to finish at Interlagos after they tangled with each other while fighting for fourth position with five laps left in Sunday’s race. Team boss Mattia Binotto summoned both drivers to his trackside office after the incident, but only to tell them that they were not to discuss the details of the collision with the media and that they should both apologise to the team.

A further debrief, in which Ferrari will fully analyse the incident from data and video, will take place in Maranello in the coming week.

“I’ve not reviewed the incident and I don’t want to do it today,” Binotto said. “I think that when doing things in the heat of the moment, you can come to the wrong conclusions.

“I heard both drivers, but we will meet again together with them to discuss what happened today and there will be time for the team to analyse all the video and the data.

“It is true it has been a very small crash with a big consequence, but still that sort of thing should not happen.”

Since becoming team principal at the start of the year, Binotto has been reluctant to publically apportion blame for poor results. Nevertheless, the season has been littered with missed opportunities and flashpoints between the two drivers that have cost Ferrari points and quickly ruled out any hope of challenging for the championship.

The tension only increased as Leclerc, who is in his first year at Ferrari and ten years younger than Vettel, gained the upper hand over his more experienced teammate shortly after the summer break. Disputes over a pre-qualifying agreement in Monza and a pre-race agreement in Russia have done nothing to ease the tension, although Binotto believes having the collision this year may be positive for the relationship between the drivers in 2020.

“The fact that it happened today, I would say it is even lucky it happened this season because there will be opportunities to clarify, in view of next year, what is not allowed to happen,” he said. “So I’m happy to take this opportunity of what happened, to clarify for the future.

“Certainly we need to improve that for the future and that is not to happen anymore.”

Asked if he regretted not having strict orders in place about wheel-to-wheel racing, Binotto said the drivers were free to race because Ferrari had already secured second place in the constructors’ championship ahead of Red Bull.

“It’s not a matter of fining them or blaming them,” he added. “I think that today they were free to fight, we let them race and the reason for that is that we have the second place in the constructors’ sewn up, so they were only battling for their position in the drivers’ championship.

“But free to fight does not mean to do silly actions, especially between the two teammates and the two Ferraris. For me today, it was simply a silly action.”