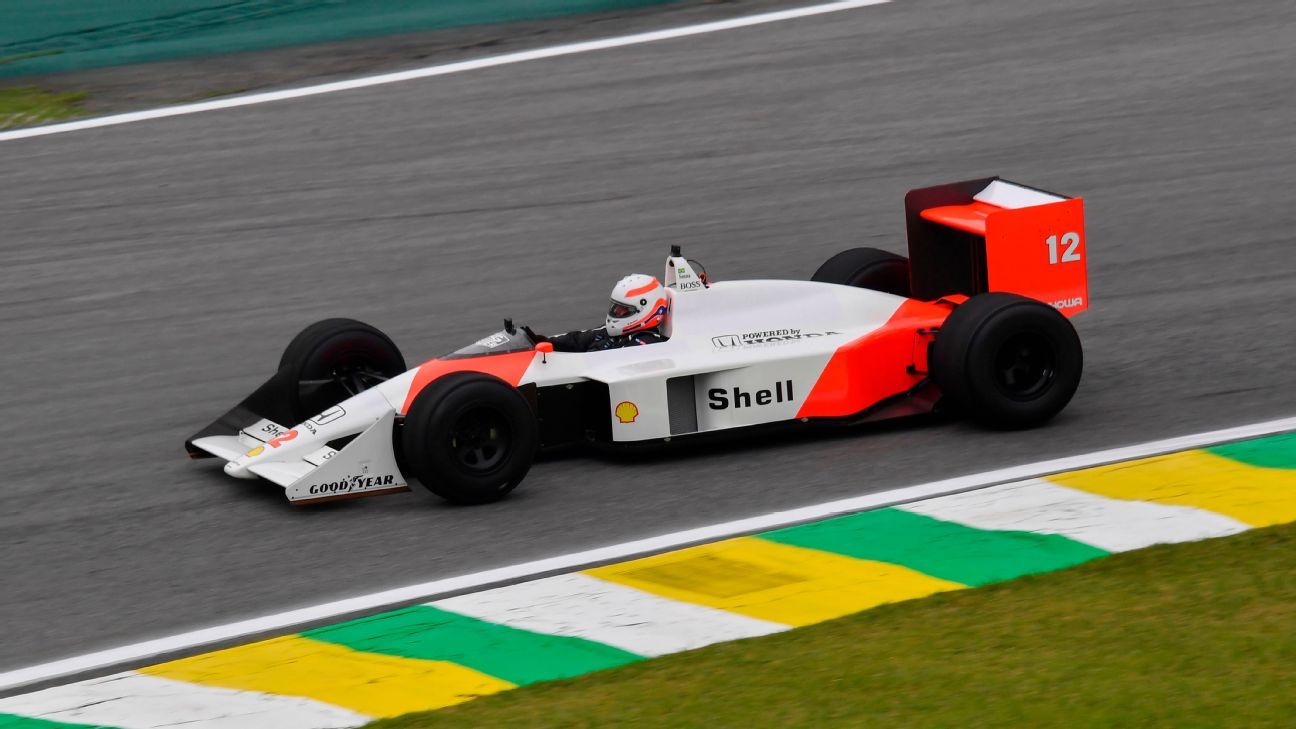 Formula One paddock hosts a lot of serious business during a race weekend, but this is a place for some of the lighter-hearted stories in the build-up to the Brazilian Grand Prix at the Interlagos circuit.

The Senna name returns to Interlagos

One of the most iconic Formula One cars of all time can be found tucked away under Grandstand H of the Interlagos circuit this weekend.

The McLaren MP4-4 is instantly recognisable by its low-slung shape and the sound of its guttural twin-turbo V6 engine, but it carries an extra wedge of significance in Brazil as it was the car that took Ayrton Senna to his first world championship in 1988.

Twenty-five years on from the Senna’s death at Imola, F1 sponsor Heineken has arranged for the MP4-4 to run again in Brazil with Senna’s nephew, Bruno, behind the wheel. The car never raced at Interlagos in period, the Brazilian Grand Prix was held in Rio de Janiero in 1988, but the sight of a yellow helmet in Marlboro-liveried McLaren is still enough to set the pulse racing.

Senna completed a practice run on Thursday, struggling to find a gear as he left the makeshift pit lane on the outside of Interlagos’ famous Senna Esses, but finally got up to speed as he explored the upper rev range of the 31-year-old V6 along Interlagos’ pit straight.

He will complete another demonstration run on Sunday when the circuit’s grandstands will be packed with passionate Paulistas, who still cling to the memory of their most famous son.

“I’ve not driven this car but I’ve driven the car that belongs to McLaren before at the Goodwood Festival of Speed,” Senna told ESPN ahead of his Thursday practice run. “But I’ve never driven one of these cars on a race track.

“I was racing in Formula 3 back when I drove it in Goodwood and I asked the mechanics if they would give me lower revs or less boost and they said no. So then I asked, ‘How much power?’ and they said 1,200bhp [brakehorsepower]! So only the 1,000 more bhp than I my F3 car at the time! That feeling of tunnel vision was right there. It was super cool.

“This car is proper analogue stuff. We are in the digital era of cars now where you have paddle shift, you don’t have a clutch pedal and most of the stuff is done digitally. But with this thing, everything you do is down to your input. Gear change, brake pressure, steering, throttle — everything is absolutely your input.

“It’s pretty busy in the cockpit and I can really admire those guys when they were racing and trying to keep things alive without failures. It’s very different to what we have now, but very special.“

Heineken will contribute money to the Senna Foundation charity every time the #ObrigadoSenna hashtag is used this weekend.

“I always generally do a new helmet in honour of Ayrton during the Brazilian Grand Prix,” Hamilton said in Sao Paulo on Thursday. “It’s a salute to him – but also there’s no Brazilian drivers here, and I know how much Brazil misses Ayrton, so it’s kind of cool – even if they can’t see my helmet – to bring it back each year. Plus he’s the one who inspired me to do what I do.”

Hamilton, F1’s first black driver, has frequently spoken about what Senna meant to him both growing up in a working-class household in the U.K and trying to progress up the motor racing ladder.

“Superman – he was my favourite superhero, I wanted to be Superman. I saw Ayrton doing what he was doing, and the way he stood up for himself, and as a young boy, in Stevenage, I was constantly confronted with bullying, it was great to see someone standing up for themselves, standing up for their beliefs.

“His never give up attitude. His aggressive driving style he had. And his sheer skill was to be admired and that inspired me. In terms of his legacy, it still stands, he is viewed as one of the greatest drivers of all time. He moved a whole nation – can’t think of another driver who has done that, maybe Fangio has. If you look at Princess Diana when she passed away, how many people came out that day, it’s pretty much the same here when Ayrton passed. It was huge for the country but also around the world.”

Hamilton also used Thursday’s media commitments to comment on the praise he had received since winning a sixth world title. Ferrari’s Sebastian Vettel, the second most successful driver of the modern era, sought Hamilton out after the finish of the U.S. Grand Prix.

But the praise was not just limited to Vettel. Hamilton revealed that his old McLaren teammate and rival, Fernando Alonso, has sent him a congratulatory message in the wake of the Austin race As a rookie in 2007, Hamilton infamously clashed with Alonso when they were paired at McLaren and the two’s careers have been associated together ever since.

“Recognition is not something that drives me, but it definitely is an honour when you have other drivers, particularly like Seb, that you respect so much for their ability. Over the years you have commented on their ability, you have belief in their ability and you’ve then built a rapport that is constantly growing. And for them to take a moment and show that bit of respect is amazing.

“I got a text from Fernando as well, which was pretty amazing. I was really grateful for that. We have been through a whirlwind of experiences together over the years and, in all honestly, I have always had respect for what he has achieved and his ability, and also seeing his growth through his period of time at McLaren.”

Former McLaren boss Ron Dennis, the man who first signed Hamilton to a professional contract, also reached out to congratulate his old protege.

“Seeing Ron’s text, it really touched me inside,” Hamilton said. “I met him when I was 10 years old, and he saw something in me that no one else did except for my dad.

“He gave me an opportunity to showcase my abilities and to learn and to grow. Without him, I most likely wouldn’t have made it to F1. I would have fallen away due to a lack of finance and I would have been leapfrogged by a bunch of individuals who had more money to back them.

“So I am forever grateful to Ron and always have love for Ron. And I hope he feels some sort of pride. He said how proud he was, so I hope that he can share and feel that he is just as much a part of this as anyone.”

This article will be updated throughout the week of the Brazilian GP.