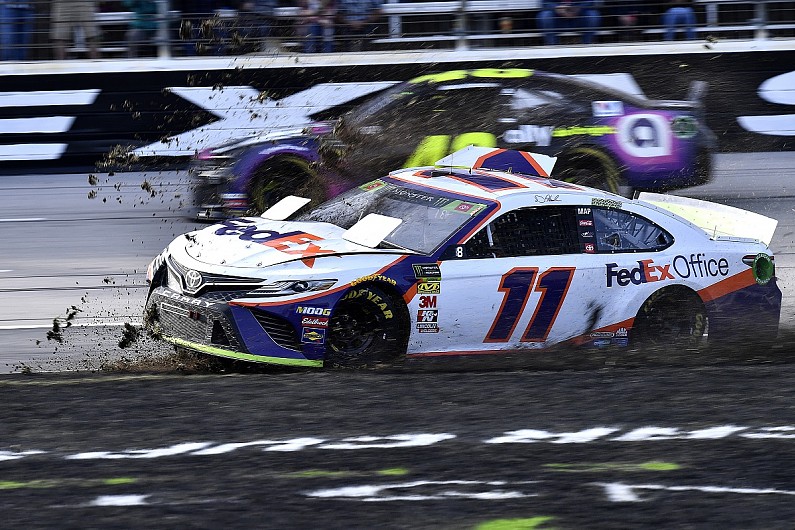 The identity of the four drivers who will fight for the 2019 NASCAR Cup Series title will be settled at Phoenix on Sunday, with an early favourite in jeopardy.

Martin Truex Jr and Kevin Harvick have guaranteed the first two slots in the ‘championship four’ with their wins at Martinsville and Texas.

Behind them, Kyle Busch and Joey Logano are currently in the next two transfer spots, while Denny Hamlin, Ryan Blaney, Kyle Larson and Chase Elliott all head into Sunday afternoon’s race effectively in ‘must win’ situations given their points deficits.

Hamlin on the brink 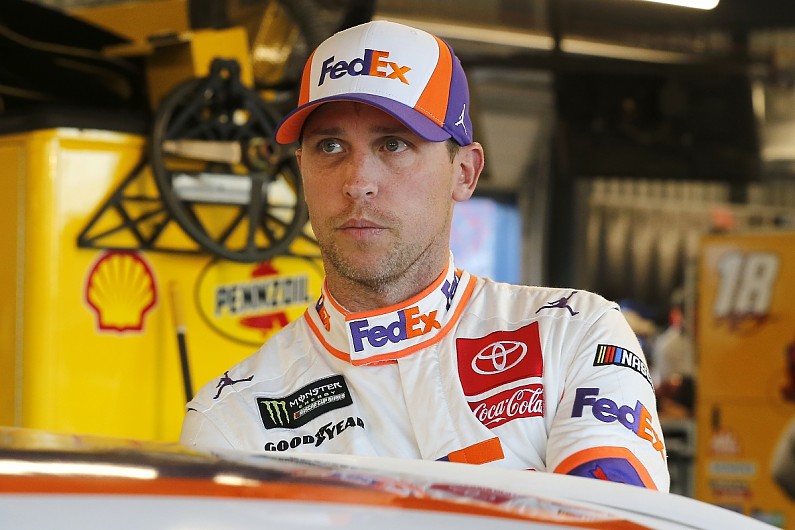 That’s particular galling for Hamlin, whose five race wins so far this year – second only to team-mate Busch’s tally of seven – coupled with the often dominant form of his Joe Gibbs Racing team’s Toyotas had made him a leading title favourite.

After finishing fourth at Martinsville – where Hamlin hoped for a win – he ran into big trouble last weekend at Texas, crashing early in the race and ending up with a 28th-place finish.

But he insisted he would not be disappointed if his strong 2019 season ended without a title shot.

“You adjust your expectations. No matter what, I will not consider this year any sort of a failure. We, as Mark Martin would say, we just didn’t score enough points,” said Hamlin, who has qualified third at Phoenix.

“We had a great year, we won races, we led more laps than we have in a long time and more top-fives than anybody in the series.

“It’s been a really good year and I’m just not going to let the outcome of this weekend, or last weekend, decide whether it’s a good season or not. I think you have to adjust that.

“One race, winner take all, or a three-race round – anything can happen, and it did for us.”

Hamlin’s five wins this season are his most since the 2012 season, and came after a ’18 campaign that was his first winless year in his 14 Cup campaigns.

Asked if he would be content to end his career as his generation’s Mark Martin – an extremely successful driver who never won a title – Hamlin replied: “I think Mark Martin said it best, ‘You can still be respected and still have a really and successful career without winning a championship’.

“I read that he thinks now that he’s 60 years old, he looks back and thinks ‘will a championship make any difference in my life right now?’ He says, ‘No, it wouldn’t’.

“I’m at that point. I don’t feel like I have anything to prove.

“If the year is over after this weekend, I can’t wait to go back to the racetrack in 2020.

“It was so much fun racing this year and having a shot to win every single weekend. It was just a pleasure.” 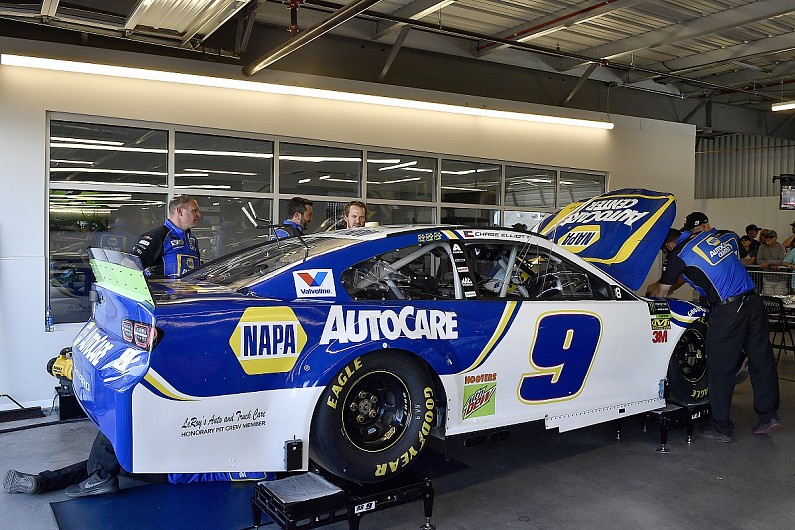 Chase Elliott is the only one of long-time powerhouse team Hendrick Motorsports’ four drivers to make it this far into the playoffs and along with Ganassi man Larson one of only two Chevrolet drivers left.

But Elliott has had a disastrous time in the ’round of eight’ so far.

He broke an axle on his Chevrolet early in the Martinsville race and spent more than 50 laps in the garage before returning to the track and finishing 36th.

Last weekend at Texas, Elliott spun on his own on lap nine, again required extensive repairs, and finished 32nd.

“It takes some talent to get 80 points back [from the cutoff line] in two weeks, but we’ve achieved it,” Elliott joked.

“Certainly self-inflicted; I hate that I messed up last week as bad as I did, there’s really no excuse for that.

“But we’re in the position we’re in, we’re there, it’s reality and we certainly will have to win to have a shot next week.”

Elliott’s points deficit leaves winning on Sunday as his only option to advance. He starts the race sixth.

“I feel like our team has worked really hard to get us this far – we could have very easily not made it past Kansas and been out then,” Elliott said.

“There’s three races in every round for a reason and you just can’t let those first two weeks affect your mindset, your approach, your aggressiveness and your will to want to win in this last opportunity.

“Just because we’re in a tough spot and it’s our last chance to make it to Homestead doesn’t mean it’s over.” 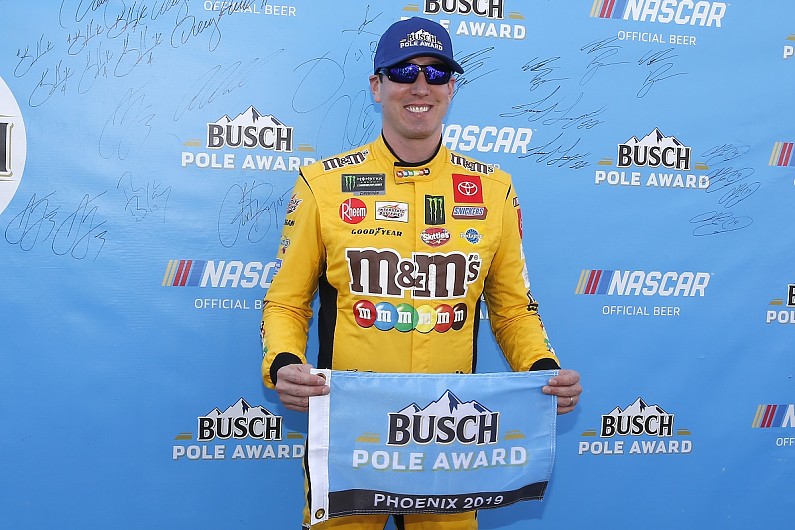 Busch starts the Phoenix race 22 points above the cut-off line, but just two points ahead of Logano in the final transfer position.

Should any of Hamlin, Blaney, Larson or Elliott win at Phoenix, whoever is fourth in the points will be eliminated.

“We all know one guy is going to move through on points and we have to do whatever we have to do in order to be that guy,” said Busch.

“If we can have a strong run and be able to go out there and win, that will put ourselves through as well too.

Busch then took pole for the race on Saturday, with Logano alongside him on the front row.

Statistically, Busch has had another strong season with four victories and 15 top-five and 25 top-10 finishes in 33 races.

But he hasn’t won since June at Pocono and he has four finishes of 14th or worse in the eight playoff races.

While Busch has not been as competitive for wins the second half of the season, Phoenix does offer him an excellent chance at redemption.

One of Busch’s four wins this season came in the spring race at the track, when he led 177 of the 312 laps.

He is also the only driver to win at Phoenix in the two races since the facility completed a major renovation and re-configuration last year.

“I really like Phoenix and we won there in the spring but that was nine months ago,” Busch said.

“So, when we go back there, a lot’s going on in the development of everybody’s cars and things like that for this season.

“The last couple times we’ve been to Phoenix, we’ve run pretty good. Hopefully, that can translate to this time around again. I’m optimistic about it. I think we can do OK.

“It’s just a matter of running another clean race and not making mistakes. We look forward to the challenge.”