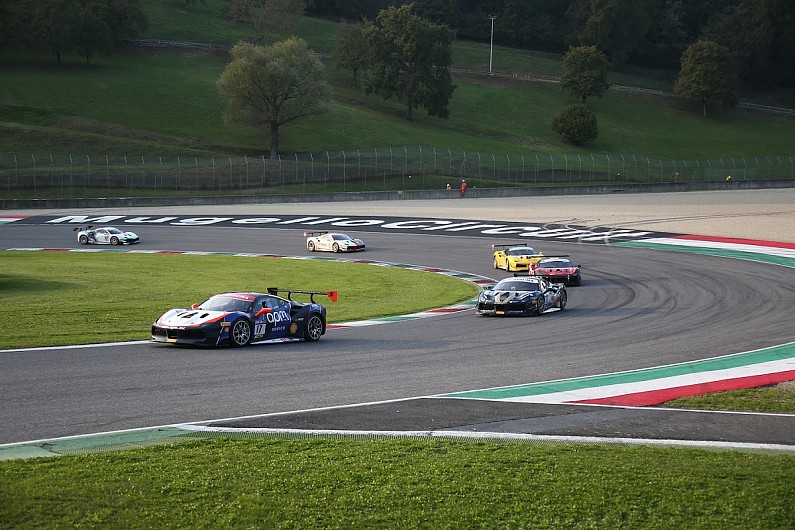 Following a steward’s review, Louis Prette won the Ferrari Challenge Europe championship in Mugello, despite a 25-second penalty that relegated him from second to 27th in the final race.

Prette had a 13-point advantage over title rival and pole-sitter Niccolo Schiro heading into the final race, and looked to have secured the championship with second, behind Schiro, when a safety car was called on the penultimate lap for a clash between Christopher Froggatt and Thomas Neubauer.

But when Prette was hit with a 25-second penalty for overtaking under yellow flags on the first lap, following a crash involving Martin Nelson and Christian Kinch within moments of the race start, it dropped him to sixth in the Trofeo Pirelli class and gave Schiro the title by a single point.

However, after an appeal from Prette’s Formula Racing team, Sam Smeeth (Baron Motorsport) and Fabienne Wohlwend (Octane 126) were given the same 25-second penalty for passing under yellows on the opening lap, promoting Prette back to fourth position in class and the championship by three points over Schiro.

“In the end we did the right thing with the team, we went up and justice was made,” Prette told Autosport.

“When I realised I did the mistake, I thought it was done. But then when we looked at the video again, we saw that everyone did it and I still had hope because if everybody does it, then I’m not the only one that has to be penalised.”

“Hopefully it will open a few doors for next year. When I see what Nicklas [Nielsen, 2018 champion] is doing right now, it’s pretty awesome, so let’s see what comes next.

“I have no clue at the moment what I’m going to do next year, but I’m sure it’s going to be something else.”

Bjorn Grossmann inherited second following the raft of penalties ahead of Pirelli-Am champion Tabacchi, while a bemused Adam Carroll – the only driver to be given a drive-through penalty during the race for overtaking under yellows, having passed Schiro on the opening lap – was promoted to third in Trofeo Pirelli and ninth overall.

When the first safety car withdrew on lap three, another accident involving Shell-Am points leader Agata Smolka and Corrina Gostner at turn one delayed the start of racing proper until lap seven.

Once Carroll came in to serve his penalty, it left Schiro out front from Smeeth and Prette. The Monegasque battled past Smeeth around the outside on lap 11, but didn’t have a chance to challenge Schiro before the safety car re-appeared. It proved academic with the penalty, but Schiro’s elation at victory would soon be tainted with disappointment.

Prette’s father Philippe capped off an excellent day for the family with his eighth Asia-Pacific victory of the year, seeing off late pressure from race one-winner Go Max.

Series champion Prette Sr led away comfortably at the start, but came under threat in the final few laps until contact between Liu Jinxiaorui and Alex Moss brought out the safety car.

Nobuhiro Imada had a quiet race to third, while Makoto Fujiwara sealed the Coppa Shell title with a class victory in fourth overall.

Ray Wu returned after his race one crash to win the Shell-Am class in seventh overall.

Despite losing out on victory to Benjamin Hites, second was enough for Cooper MacNeil to defend his Ferrari Challenge North America title.

MacNeil came into the final race with a 13-point buffer over his Chilean rival, and led from pole until the final lap when the dogged Hites (TR3) lunged down the inside at turn one and forced MacNeil to cede the corner.

But his seventh win of the year came too late to deny MacNeil, with the Scuderia Corsa driver sealing his second championship.

“We had to work a little harder this year than we did last year, which is a compliment to the series,” said Scuderia Corsa technical director Steve Newey.

“Cooper did a fantastic job all weekend, put it on the pole today and he had a hard fight on his hands with Ben, but he did the smart thing and finished second to tick off the championship that we came here for.”

Behind them, Ross Chouest (Ferrari of Palm Beach) completed the podium in third, with Marc Muzzo fourth.

Those positions had been occupied by Pirelli-Am title rivals Neil Gehani and Ziad Ghandour in the early laps until Gehani turfed Ghandour into a spin at turn one. Although Gehani was given a drive-through penalty, Ghandour’s struggles on flat-spotted tyres meant his aggressor resumed still ahead and controversially claimed the class title.

In their absence, John Megrue (Ferrari of Long Island) was promoted to victory in the Pirelli-Am class ahead of Brent Holden, while Brad Horstmann (Riley Motorsports) wrapped up the Shell-Am crown.