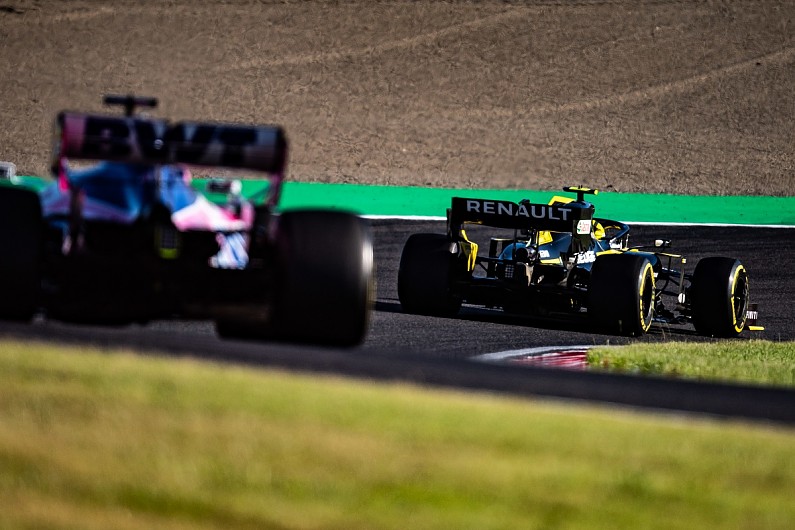 Renault has had both its cars disqualified from Formula 1’s Japanese Grand Prix for using an illegal driver aid.

Following a protest lodged by the Racing Point team, the FIA stewards held a teleconference hearing on Wednesday to evaluate whether a brake bias adjustment system used by Daniel Ricciardo and Nico Hulkenberg in Suzuka was legal.

The stewards believed that the system was not in contravention of F1’s technical regulations, but that it was a driver aid.

As a result, Daniel Ricciardo and Nico Hulkenberg have been stripped of their seventh and ninth place finishes.

Racing Point’s protest was based on claims that it believed a pre-set lap distance-dependent brake bias adjustment system was in breach of several F1’s regulations.

FIA documents revealed the suggestions had originally been made by an ex-Renault employee.

Racing Point argued the system was a breach of Article 27.1 of F1’s sporting regulations, which demand a driver drives the car alone and unaided.

The team also felt Renault had breached Articles 11.1.3, 11.1.4 and 8.6.3 of the technical regulations that outlaw powered devices that alter brake balance, or any system not controlled by the driver.

Renault insisted that its brake bias adjustment system did not use a lap-distance trigger, and was within the technical regulations.

It offered full details of the system to the FIA, but this has been kept confidential and has not been revealed to the public.

Following a teleconference hearing between the Japanese GP stewards, it was concluded that Renault’s system did comply with the technical regulations.

2. The described control system is not pre-set, lap distance-dependent as alleged.

3. Renault drivers use buttons mounted on the steering wheel to control brake balance in compliance with Article 8.6.3 FIA Formula One Technical Regulations. These are connected to the FIA Standard ECU.

A stewards statement read: “The brake balance adjustment system in question acts as a driver aid, by saving the driver from having to make a number of adjustments during a lap.

“The Stewards note that there is a clear distinction between this system and one which provides actual feedback control, which could be a substitute for driver skills or reflexes.

“Nevertheless, it is still an aid and, therefore, contravenes Article 27.1 FIA Formula One Sporting Regulations.”

The decision was taken to disqualify Ricciardo and Hulkenberg from the Suzuka race because it was felt that they had gained an advantage from the system.

Because of the unique nature of the hearing, an extended deadline has been proposed should Renault decide to appeal the penalty.

It has until Thursday 10.00 local time in Mexico to notify the FIA of its intent to appeal if it wishes to do so.

The impact of Renault’s disqualification

The revised results put Renault under pressure from Toro Rosso for fifth in the constructors’ championship.

It also moves Racing Point driver Sergio Perez from 11th to ninth, above both Renault drivers, in the drivers’ contest.

Ricciardo and Hulkenberg slip to 12th and 13th, falling back behind McLaren’s Lando Norris and the Toro Rosso of Daniil Kvyat as well.

Mercedes’ constructors’ title victory also remains confirmed – by one point – despite Charles Leclerc being promoted to sixth and gaining an extra two points for the Ferrari team.

It also boosts his advantage in third place in the drivers’ championship to 11 points over Max Verstappen and Sebastian Vettel.