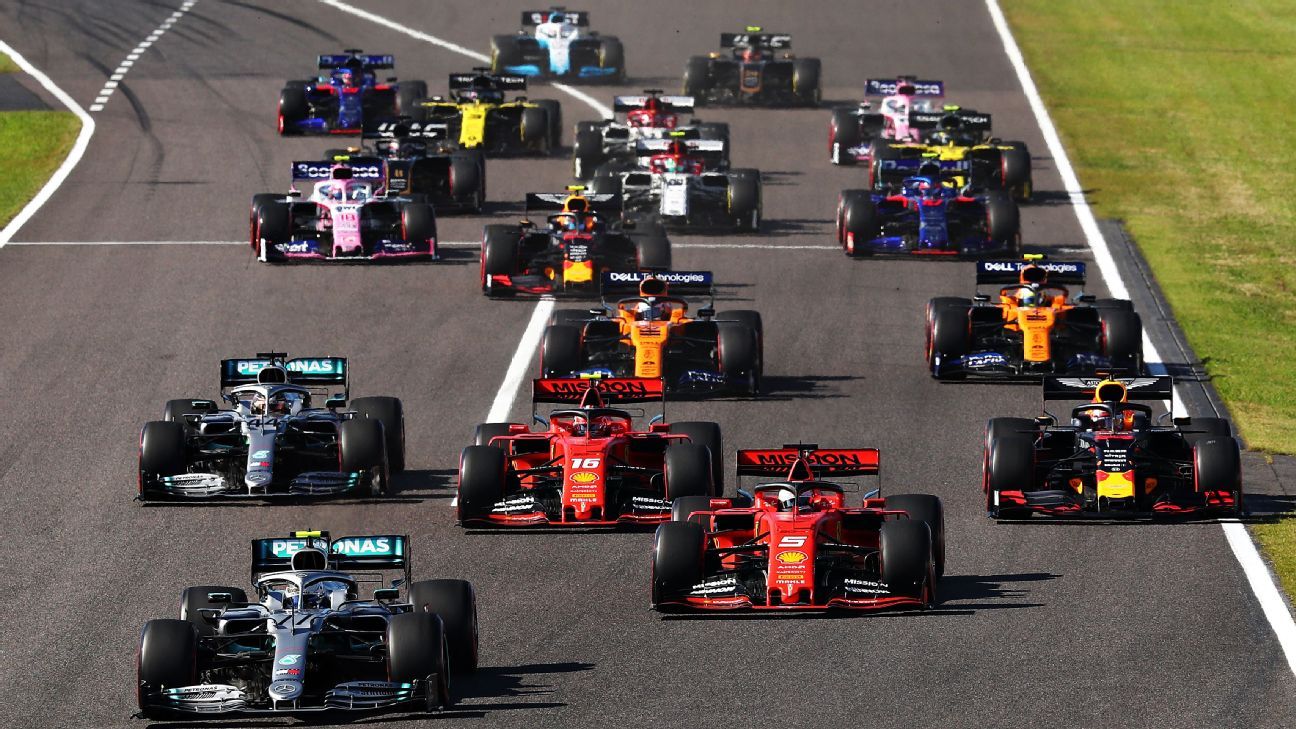 Formula One is nearing the end of its current season. Four races remain, in Mexico, the U.S., Brazil and Abu Dhabi, and there is plenty of business to decide on and off the race track.

Here’s a look at the most pressing issues likely to generate the most headlines between now and the end of the 2019 campaign.

Hanging over everything at this weekend’s Mexican Grand Prix will be discussions over F1’s imminent future, with that race the final opportunity for teams to talk in the paddock ahead of the deadline to decide the 2021 rules, Oct. 31.

F1 hopes its next rule change can achieve several things. Bringing the competitive level of the teams closer together is top of the agenda, as is creating cars which allow for closer and more exciting racing. While there are discussions ongoing about the cars themselves, F1 has also been discussing making revisions to the race weekend format. In a sport as political as this, where teams still have a major say in the rule-making process, achieving such radical change is easier said than done.

The bigger teams have been apprehensive about attempts to restrict development freedom and use standard parts. The concern is that F1 will verge on a single-make formula with little to distinguish the aerodynamic designs, while the cars will be made heavier and slower once laden down with common-denominator, shared parts.

Getting the teams on board is essential — ahead of the last meeting between them in Paris the BBC reported six were unwilling to accept the proposals as they were presented at that time. While F1 has the power to push on without unanimous support, teams also have the power to not sign up for them. F1 knows the devastating impact the latter would have on the sport so is likely to proceed with caution during these negotiations. Ferrari reminded F1’s rulemakers of the power it has to shape these regulations late last month, when team boss Mattia Binotto said it would “be a shame” to use the team’s veto on some parts of the 2021 rules package.

Many have pointed out the irony of the Oct. 31 date, which is the same deadline the United Kingdom set to implement its controversial exit from the European Union, a process which has been gridlocked by a failure to agree on a number of issues. There is a growing number in the paddock who doubt F1 will have reached a consensus by the time F1 convenes again in Austin on Halloween ahead of the U.S. Grand Prix. This one might just rumble on a little bit longer still.

In terms of raw pace, Ferrari has been the team to beat of late. The red cars have made Mercedes look very beatable since the summer break and led many to wonder what the championship would have looked like if Ferrari had found its feet earlier in the season. Wins in Belgium, Italy and Singapore showed the strength of the Italian team’s package, although blown opportunities in Russia and Japan have acted as reminders of the flaws that have dogged Ferrari’s race operation in recent years.

Ferrari’s surge has highlighted Mercedes’ struggles to keep up in the department it used to dominate in, engine power.

After winning at the Japanese Grand Prix, Lewis Hamilton said: “We’ve got time for next year. I think it’s not been a great year for us in terms of the great issue, in terms of our engine development.”

There are still questions among rival teams as to how Ferrari is gaining its advantage, but at this stage none of them have taken the significant step of protesting the most powerful engine on the grid. As long as it is legal, the FIA is not obliged to reveal details of Ferrari’s power unit to its rivals even if they are asking the right questions over the nature of how it works. Therefore, the secrets behind Maranello’s extra horsepower are likely to keep the other manufacturers guessing a little longer.

Nevertheless, a hallmark of Mercedes’ dominance of this era has been its relentless approach to car and engine development, so it would be foolish to suggest the world champions are on the ropes at this stage. It responded to a strong start by Ferrari to this year’s preseason by taking a big step forward in time for the Australian Grand Prix. However, Ferrari right now seems better equipped than any team in the V6 hybrid era to take a season-long fight to Mercedes.

With a considerable amount of focus already on the 2020 cars, the final races of this year will be crucial. Mercedes might be celebrating an unprecedented sixth consecutive sweep of both championships, but some more decisive defeats at the hands of Ferrari in the final races would suggest the German manufacturer will have a real fight on its hands to keep that run alive next year.

While Ferrari’s surge in performance has been impressive, it has left the team facing a real headache about what to do about its drivers going forward. Four-time world champion Sebastian Vettel has been the defacto team leader since joining in 2015 but the departure of Kimi Raikkonen and arrival of wonderkid Charles Leclerc has completely reset the narrative at Maranello this year.

Leclerc has already achieved hero status in Italy with his win at Monza in September and has shown he will not be intimidated or bossed around by his teammate. Vettel responded to Leclerc’s wins in Belgium and Italy with a classy victory at the Singapore Grand Prix, before the two clashed in a team orders saga at the Russian Grand Prix. While Ferrari put that down to a misunderstanding from what was agreed pre-race it showed two drivers unwilling to play second fiddle to the other.

With victories up for grabs there’s no reason to expect that tense situation will cease over the final races of the year. While that might create some uncomfortable situations for Binotto between now and the offseason, it could have bigger ramifications for 2020.

Mercedes responded to Nico Rosberg’s retirement in 2016 by signing the unassuming Valtteri Bottas — Toto Wolff has frequently talked about the benefit of the harmonious atmosphere the Finn has brought to the team alongside Hamilton. It is a wise move — F1’s recent history is littered with examples of two warring teammates hurting their teams’ championship chances. Vettel and Leclerc are clearly both determined to be Ferrari’s first champion since 2007, but Ferrari must prevent this tense relationship turning toxic if it wants to stand any chance of ending Mercedes’ streak next year.

McLaren looks set to claim ‘best of the rest’ honours behind the top three. The British team has gone through a very difficult spell over the past few years but appears to have turned a corner — while Carlos Sainz and Lando Norris have been brilliant on and off the track, the addition of Andreas Seidl as team boss earlier this year could be a significant moment in reviving this once-great team. Expect McLaren to keep up their run of impressive results behind the top three.

Renault, by contrast, heads into the final leg of 2019 with major question-marks over its entire F1 operation. The big-money addition of Daniel Ricciardo was supposed to be followed by a significant step up the order, but the French manufacturer has been dogged by a weak chassis even if it has finally made decent progress with its power unit.

It looks set to be beaten to fourth position by McLaren, the only team on the grid which shares its engine, which is hardly a good look for the team’s aerodynamic department. With McLaren switching to Mercedes engines in 2021 there is little keeping Renault on the grid long-term and a failure to improve its on-track results might make for a difficult boardroom discussion in the near future. Renault has often pointed to 2021 as its year to return to the front of the grid but this season has done little to suggest it is capable of turning the next rule change into a title-winning campaign.

What’s more, there is still an ongoing FIA investigation hanging over the team, which was sparked when rivals Racing Point protested what it believes is an automatic brake bias adjuster on the RS19 in Japan. Such a system would offer the significant advantage of ensuring the front-to-rear brake balance is always in the right place from corner to corner, while also adapting as the fuel load changes the balance of the car over a race distance. Renault insists it will be able defend its case “vigorously”, but if it is found guilty the penalty handed down would likely be severe.

Red Bull has used the second half of 2019 to effectively conduct an experiment live on track. The out-of-form Pierre Gasly was demoted after a poor start to his time at the team, swapping places with Toro Rosso rookie Alexander Albon ahead of the Belgian Grand Prix. Albon’s promotion gave Red Bull a chance to assess his capabilities at the front end of the grid ahead of 2020, when it hopes to place one of its two young drivers alongside Verstappen for a full season.

Albon has acquitted himself well in the races since that swap, having finished in the top six at every race he’s been Max Verstappen’s teammate. Red Bull team boss Christian Horner has since admitted it is the Thai driver’s seat to lose.

There is more riding on the decision that just who occupies the garage alongside Verstappen. There has been clear progress with Honda in the first year of its Red Bull partnership but it remains adrift of Ferrari and Mercedes. Although Ferrari has pulled clear since the break, the big gap in the constructors’ championship was not helped by Gasly’s woeful form in the first half of the year. Red Bull hopes its improving Honda package can put it in a position to compete next year but it will need Verstappen to be aided by a competitive and confident teammate all year to stand a chance of running either Mercedes or Ferrari close in the championship.

Lewis Hamilton will most likely win the championship in Mexico City or Austin. The Mercedes driver’s sixth world title has seemed a foregone conclusion since mid-way through the current campaign and it will move him into outright second on the all-time list — one title behind Michael Schumacher’s seven.

Hamilton is set for a historic 2020 — he is likely to surpass Schumacher’s tally of 91 wins at some point next year, while a championship would move him level on a record many thought might never be beaten.

To read the title permutations for the Mexican Grand Prix, click here.