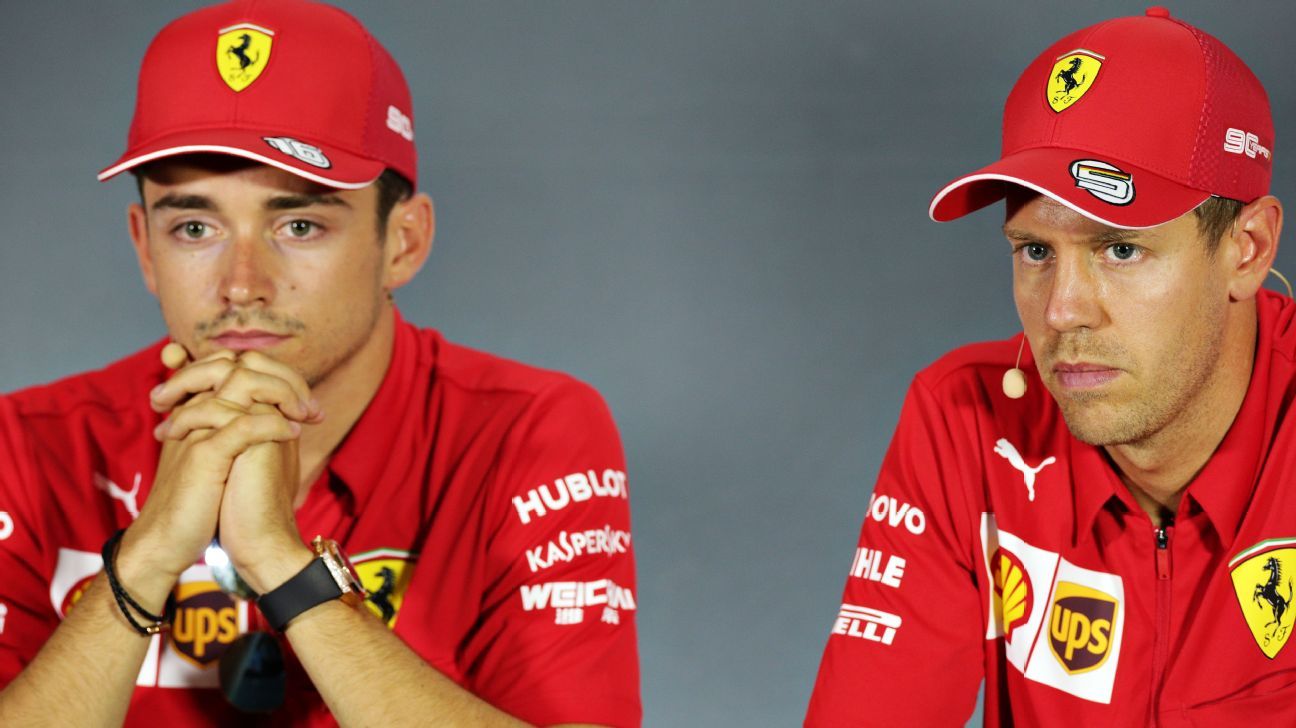 Ahead of each race in 2019, ESPN is ranking every driver on the grid in our Formula One Power Rankings.

In compiling these standings, we have taken out the car factor and focused solely on the drivers and how each has been performing. This is not a prediction for how the race will go this weekend. Nor is it a prediction for how things will look at the end of the season. Instead, read this as a gauge for who has the most influence over everything that lies ahead, who’s hot and who’s not ahead of the Japanese Grand Prix.

Since the summer break, Charles Leclerc has been the man. The 21-year-old has really been in a league of his own and for the third straight edition he holds top spot in the ESPN F1 Power Rankings. Leclerc has taken four straight pole positions and could easily have won four straight races if not for a few slices of rotten luck and unfortunate timing. But perhaps most importantly, Ferrari’s radio calls to Vettel during the Russian Grand Prix showed that Leclerc is getting closer to being their No. 1. He remains the hottest thing in F1 right now.

But take nothing away from Lewis Hamilton who is driving brilliantly right now — particularly since Ferrari upped its game in Belgium — and is an obvious choice to stay right behind Leclerc. Its a matter of when, not if, Hamilton wins his sixth championship.

Rejoining these two on our podium is Max Verstappen, who took an engine penalty in Sochi and still went on secure P4, his 12th top four finish of the season. The Dutchman continues to extract the most out of the Red Bull, making a mockery of his teammates, whoever that may be. With rain on the Suzuka forecast, you’d be crazy to write off Verstappen for the win this weekend. Watch him closely.

Norris is feeling confident in his surroundings right now and each week looks more like he belongs in Formula One. The rookie has been superb all year but has shifted into another gear since F1’s resumption in Belgium. With Verstappen retaking his place on the podium, someone unfortunately had to fall out and Norris is the unlucky man. But don’t get me wrong, he is having a brilliant rookie season and the fact he’s already giving teammate Carlos Sainz a run for his money shows just how bright his future is.

The summer break came at the wrong time for Sainz. Since then luck hasn’t been on his side and as a result he’s only managed to add eight points to his championship tally. But the Spaniard has shown this year that he is the most consistent midfield driver and still clearly dominates the ‘best of the rest’ category. Give him an issue-free weekend and he will deliver.

Ferrari may have just been protecting their man on pole position, but for the first time we heard them favouring Leclerc over Vettel during the Russian Grand Prix. Vettel has certainly lifted his game since the summer break — albeit still not to Leclerc’s level — but the Scuderia showed in Sochi that they have no issue in altering the No. 1 status to Leclerc if the four-time world champion can’t get back to his devastating best.

Let’s be honest, Perez had a horrible patch of form spanning the Spanish Grand Prix right through until the summer break. But as things stand, he might just be the form driver of the midfield. In the last four races, Perez has tallied 22 points, dwarfing teammate Lance Stroll’s total of one solitary point. In doing so he’s crushed any suggestion that Stroll could possibly become Racing Point’s lead driver. Keep a close eye on the Mexican this weekend in Japan. Perez has always performed strongly and consistently at Suzuka. In the last three years he’s finished P7, P7 and, you guessed it, P7.

You get the feeling Ricciardo still hasn’t quite gotten over that qualifying penalty in Singapore. Remember it? The one which left him seething and asking the stewards to pay for his flight back home. Ricciardo hasn’t been himself since then and another retirement last time out in Russia is sure to compound his misery.

We said it in the last edition, but not racing for Red Bull seems to have really helped Gasly. Dropping back to Toro Rosso has allowed him to escape the spotlight, one which is now being pointed directly at Albon. With a strong finish to the season, Gasly could still manage to lock down that coveted Red Bull drive for 2020 – something which seemed almost impossible just six weeks ago.

Okay, Hulk doesn’t have a seat for 2020 (as yet) and things appear to be quite dire, but if you look at his results there’s certainly reason for optimism. Hulkenberg is one of just five drivers to score points at every race since Belgium (the others being Hamilton, Bottas, Leclerc and Alex Albon). Not bad company. If he keeps it up, Alfa Romeo and Williams will certainly be taking note.

Is Verstappen’s teammate going to be forever cursed? It sure appears that way. Either that or the Dutchman is just stupidly quick and making a mockery of anyone in the other Red Bull. After impressing in his early races with the team, a few errors have begun creeping into Albon’s driving and right now he’s nowhere near Verstappen. He’s also nowhere near guaranteeing his Red Bull drive beyond 2019.

The Alfa Romeo battle wasn’t even close at the beginning of the season, but Giovinazzi has found something since the summer break and is showing that he, like Hulkenberg, deserves to stay in the sport. Still, a few more points to his name would be nice as the championship standings suggest he’s last overall, that is if you exclude the Williams pair.

Once a wing-man, forever a wing-man. Bottas might sit second in the drivers’ championship and already inked a Mercedes contract for 2020, but has been underwhelming for a long time. Until he can beat Hamilton on merit, even just once, it’s hard to find a place for Bottas inside the top 10 of the Power Rankings.

“If we wouldn’t have a stupid, idiotic steward we would be eighth,” said Haas team boss Gunther Steiner after the Russian Grand Prix. Sochi was another frustrating weekend for K-Mag, but at least it ended in points, something which has been rather difficult for Haas in 2019. Penalty or not, Magnussen has to head to Japan feeling better about himself.

Back-to-back retirements is far from ideal, but right now it’s not harming Russell too much. We all know he’s in a car that’s just not competitive, and all we can do is judge him on his teammate battle with Robert Kubica. How’s he going with that? Well, it’s not even close.

First lap incidents, eh? Grosjean has certainly been responsible for a few of them over the years, but he was a tad unlucky in Russia and early contact spoiled what could have been a glorious afternoon for the Haas driver. It’s always made worse when your teammate goes on to secure a solid result. Can he bounce back?

That battle for the podium in Germany feels like a lifetime ago. Stroll has struggled in 2019 and it’s becoming more and more obvious as Perez begins to hit his straps in the back half of the season and reassume the lead driver role at Racing Point.

“The last four races have been nightmares,” Raikkonen said after Russia. For the first time since 2008, Kimi finds himself without a single championship point from a stretch of four races. He’s fallen away big time, and he knows it.

Having so little to drive for comes with a cost. Red Bull denying Kvyat a return to the team seems to have been one of the worst things they could have done. The Russian has been going through the motions since Singapore, when Red Bull confirmed he would be staying at Toro Rosso in 2020.

His comeback officially ends when the chequered flag falls in Abu Dhabi, but it really feels like it ended quite a while back. Kubica never really showed anything to suggest he could still compete at the highest level, and although his personality will be missed, Williams won’t really be missing his driving.