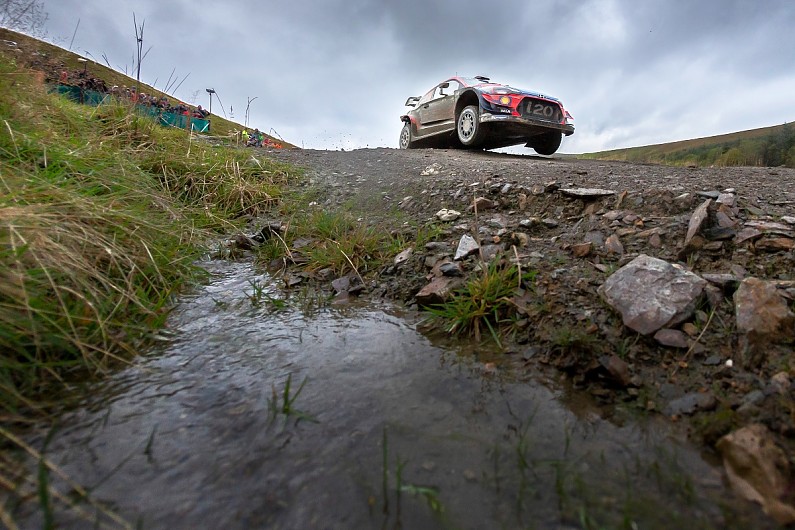 Tanak suffered a scare early on the Sweet Lamb stage when a compression ripped the rear bumper off his Toyota Yaris WRC, which caused additional noise that meant he “couldn’t hear anything” co-driver Martin Jarveoja was saying.

But Tanak appeared relatively unaffected on the following test and conceded only 0.4 seconds to Neuville, though at one point he had been 1.5s ahead of Hyundai’s lead driver on the split times.

Neuville is now in second place behind Tanak, winning the re-runs of both Myherin and Dyfi. But Tanak’s performance on Sweet Lamb, where only Neuville’s team-mate Andreas Mikkelsen was faster than the championship leader, ensured the lead gap crept up to 10.1s. 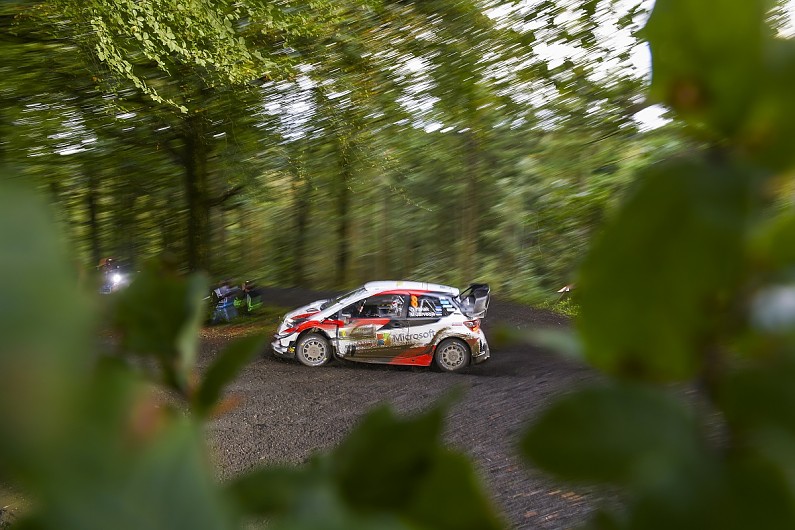 Ogier was unable to keep pace with his title rivals on the polished afternoon stages, with less grip on offer from the forest roads as rain began to fall once more.

Dyfi was especially costly for Ogier, who dropped 3.9s to Neuville – leaving him 6.2s astray heading to the final stage of the day in Colwyn Bay later in the evening.

Early rally leader Kris Meeke continued to fall away slightly from the podium battle in fourth place, closely matching Ogier’s pace for most of the afternoon loop though ultimately dropping to eight seconds behind the five-time Rally GB winner.

Mikkelsen’s stage win on Sweet Lamb helped him fend off the advances of M-Sport’s Elfyn Evans, who had won all three stages of the Saturday morning loop.

Spooked by an impact on the same Sweet Lamb test where Mikkelsen had gone fastest, Evans backed off slightly for fear of a puncture and lost four seconds.

But Evans’s strong pace on the other two stages ensured he still cut his deficit to Mikkelsen, whittling the gap to fifth place down to 2.8s.

Teemu Suninen’s Ford Fiesta WRC ended the morning looking worse for wear from a rear-left puncture that had ripped off the surrounding aerodynamic bodywork, but he continued steadily in a lonely seventh place with nothing to fight for.

Likewise, Pontus Tidemand has big gaps ahead and behind in eighth place with the third M-Sport Fiesta, now four minutes ahead of Craig Breen’s ailing Hyundai. 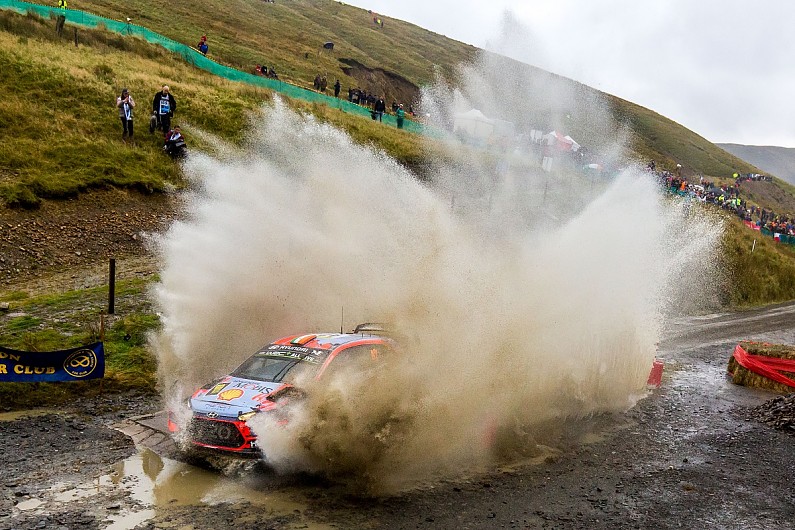 An earlier barrel-roll on the morning pass of Myherin had caused extensive bodywork damage to Breen’s i20 WRC and though mechanically the car was intact, he couldn’t see properly, unable to clear mud that was accumulating on his car’s windscreen.

Combined with a one minute penalty for a road order reshuffle, where he started Sweet Lamb immediately behind Neuville in what appeared to be a tactical gambit to give the Hyundai team-leader a small road order advantage, Breen has surprisingly ended up battling Skoda’s Kalle Rovanpera for position.

WRC2 Pro championship leader Rovanpera is 11.5s behind in 10th and was under a second slower than the hamstrung Breen on Dyfi despite being in a less-powerful R5-specification car.