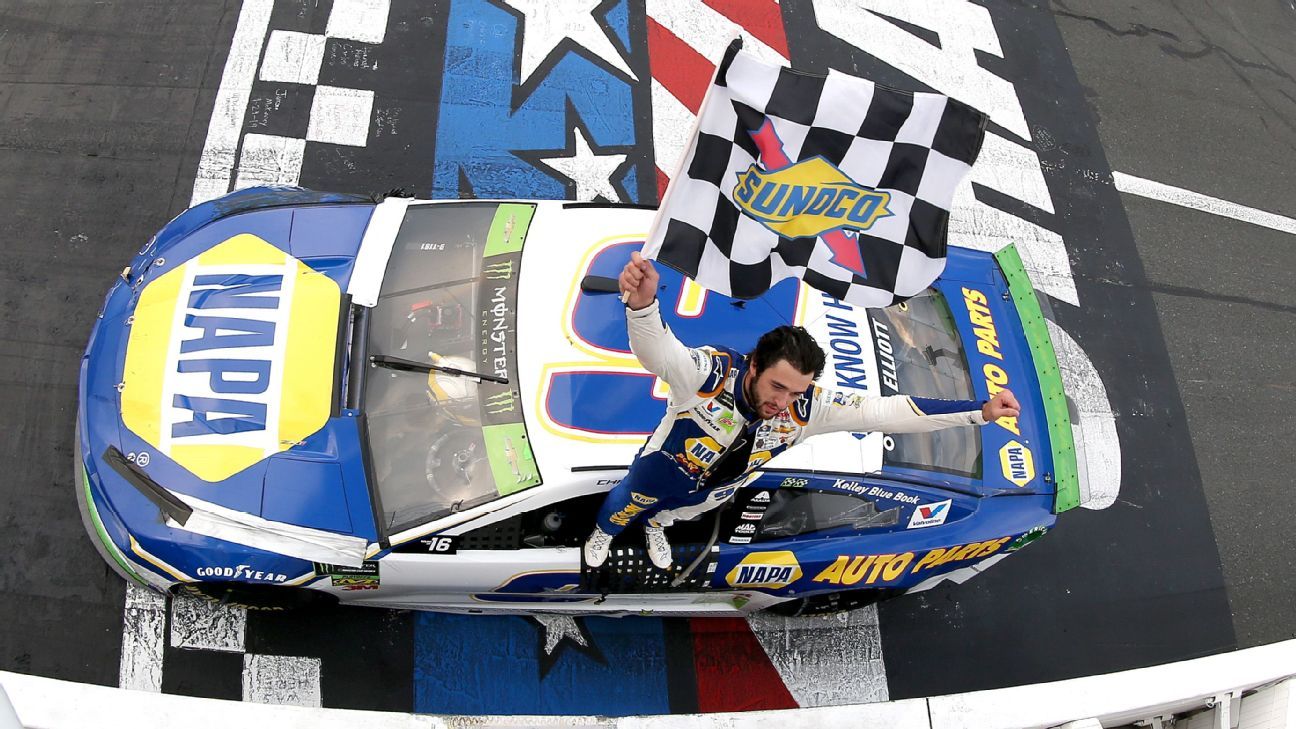 Sunday, after the checkered flag falls, is always one of the saddest times of the NASCAR season.

I’m talking, of course, that I can no longer use the term Roval for another season. What, you think I was referring to the elimination of four drivers from the playoffs? Sad for them, but this is serious stuff.

Anyway, it’s time to move on, much like the dozen drivers who advanced to the Round of 12. Among them was last Sunday’s winner, Chase Elliott, who’s become the road course master in the Cup Series, winning three of the past five dating back to last year’s Watkins Glen race.

That puts Elliott just one win behind Martin Truex Jr. and Kyle Busch for the most road course wins among active Cup Series drivers. And he’s done that in 10 career road course starts.

That’s a bonus starting stat for you, but here are three more of my favorite statistics from the NASCAR racing weekend.

The Chase is on

Chase Elliott went winless for the first 98 races of his Cup Series career, despite a number of close calls. Since then, he’s won six of the past 44 races, tied with Kyle Busch, Martin Truex Jr. and Brad Keselowski for the most in the series in that time, and he hasn’t gone more than 13 races without a win.

Elliott was the 42nd driver in series history to go at least 99 races into his career before picking up his first victory (among those drivers who won a Cup race).

Of those, 33 (or 79%) never reached six career wins, but among the notables who filled up the stat sheet after going 99-plus race before winning are Ricky Rudd, Dale Jarrett, Mark Martin and, who else, Chase’s father, “Awesome” Bill Elliott.

Let’s also take a paragraph or two to appreciate that Elliott doesn’t turn 24 until later in November. His six career wins before turning 24 are the third-most in series history, his last win breaking a tie at five with Joey Logano and some dude named Richard Petty.

The only drivers with more wins before their 24th birthdays were a couple other young Hendrick drivers, Kyle Busch (14 before, the first four with Hendrick) and Jeff Gordon.

Bow to the king

Alex Bowman finished second behind his Hendrick teammate at the Roval, giving Hendrick Motorsports its record-extending 42nd 1-2 finish. No other team has more than 26 (Joe Gibbs Racing).

Elliott and Bowman are the second set of teammates to have a pair of 1-2 finishes this season (Truex Jr. and Kyle Busch have three), and they’re the first teammates to do it for Hendrick Motorsports since Jimmie Johnson and Dale Earnhardt Jr. at Atlanta in February 2016.

And after not having a top-two finish in his career entering this season, Bowman now has five this season, including his first career win. Although he just has the single win, Bowman is tied for the series lead with four runner-up finishes, along with multi-time winners Kyle Busch and Logano.

After more than six years, AJ Allmendinger found his way back to victory lane in the Xfinity Series, taking the checkered flag in Saturday’s race at the Roval.