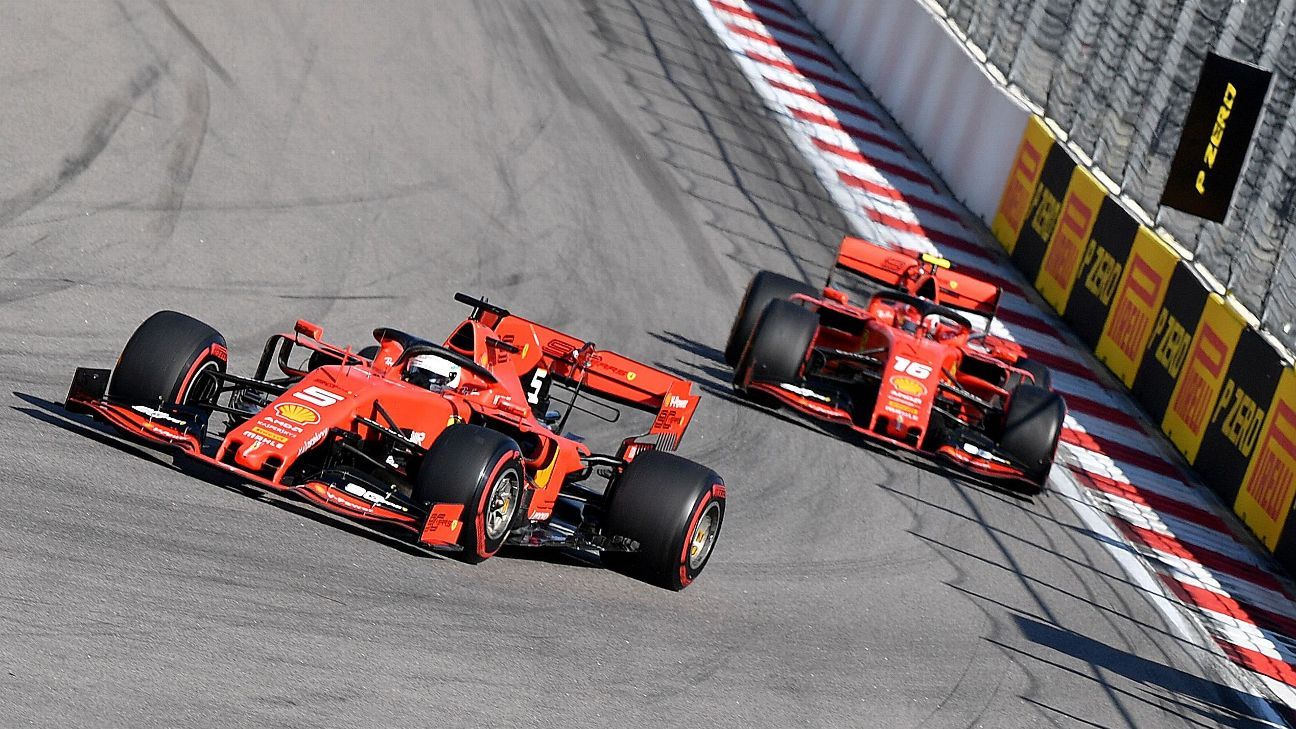 Sebastian Vettel’s Russian Grand Prix ended with a power failure midway through the race, but up until that point it had featured a series of defiant messages to Ferrari and an apparent refusal to follow team orders.

Vettel had made a brilliant getaway in Sochi, jumping Lewis Hamilton and then using the slipstream of teammate Charles Leclerc to lead into the first corner. It soon became clear Ferrari had anticipated this and made plans to swap its drivers back once running 1-2, something the drivers spoke about before the race.

Vettel had other ideas. Here is how Ferrari’s difficult situation played out over race radio.

Lap 2 – Ferrari to Leclerc: “We are looking to do the swap partway into the race”, suggesting a team order is imminent for Vettel.

Lap 6 – Vettel to Ferrari: “I would have got him anyways. Let’s break away [from Hamilton] for another two laps and let me know.”

Lap 7- Ferrari to Vettel: “Let Charles by.” Vettel replies: “Tell him to close up”

A frustrated Leclerc to Ferrari: “You put me behind. I respected everything. We will speak later, but now is difficult to close the gap obviously.”

Leclerc replies: “I completely understand, the only thing is that I respected and I gave him the slipstream no problems. Then I tried to push at the beginning of the race. No problem, manage the situation.”

Lap 24 – Vettel tells Ferrari: “My rears are falling off now”, suggesting he wants to pit. Doing so at that point would cover off what’s known as the ‘undercut’ – when one driver pits earlier and uses the fresh tyres to ensure he is ahead when a rival makes a later stop.

Lap 26 – Vettel pits from the lead for medium tyres. Emerges 1.3s behind Leclerc, meaning Ferrari has been able to fix the situation in the pit-stop phase.

Lap 28 – Vettel slows to a halt, complaining of a loss of power from an MGU-K failure. Vettel, who has been an outspoken critic of the V6 engines since their introduction in 2014, reacted to his retirement by saying: “Bring back the f—ing V12s”

What was Ferrari trying to achieve?

By putting a Turn 2 agreement in place, Ferrari was trying to minimise the threat from its main rivals Mercedes and secure the Russian Grand Prix victory its car’s pace deserved. It was a noble objective — and one that undoubtedly made sense in the air-conditioned calm of the engineering room — but it overlooked Ferrari’s biggest weakness of the last four races: The increasingly tense relationship between the team’s two drivers.

As a four-time world champion, Vettel should be Ferrari’s natural No.1, but Leclerc’s raw pace this year has been impossible to ignore. Victories for the 21-year-old in Spa and Monza underlined the shifting power dynamic in the team, leaving Vettel fighting not just for No.1 status at Ferrari, but also his relevance in the sport. He hit back with victory in Singapore last week — albeit with the help of Ferrari’s strategy — but Leclerc’s fourth pole position in a row on Saturday immediately put Vettel’s Marina Bay revival back in the correct context.

And so, when the opportunity emerged after Turn 2 to double down on his success in Singapore, Vettel couldn’t resist taking it up. In his mind, he had made the better getaway from the line and claimed the lead on merit. What’s more, he had the pace to keep it in what was clearly Ferrari’s race to lose.

Although team boss Mattia Binotto denied it after the race, the back and forth in radio messages in the opening stint suggested Vettel had gone against the pre-race agreement. He was asked at least twice (based on the radio messages that were broadcast — often there are more) to give back the position, but defied the team both times and extended his lead over Leclerc.

Faced with a runaway car in Vettel, Ferrari ultimately found a more elegant way of switching its drivers using tyre strategy instead of team radio. But the team’s dirty laundry had already been aired in public and although the messages were all relayed via each driver’s race engineer, the conflict was clear.

After the race, Vettel had a chance to explain his side of the story to the media but chose not to.

“I think on my side it’s best if I don’t say anything,” he told a packed room of journalists two hours after the race. Viewed in the context of the day’s events, it was hard not to read it as an admission of guilt.

One thing was clear from Ferrari’s dealings with the media on Sunday night: This one will be dealt with internally.

Vettel’s retirement turned out to be a double blow to Ferrari.

As his car stopped on the side of the track it required the deployment of a Virtual Safety Car — ensuring every driver on track drives to a delta time while marshals are on the circuit. Mercedes used this moment to pit both its drivers, propelling Hamilton into the lead. The proper Safety Car was required shortly afterwards when George Russell crashed, which Ferrari used to stop Leclerc for fresh tyres to attack the Mercedes drivers in the closing stages — this put him behind Valtteri Bottas.

The Mercedes would stay 1-2 until the end of the race, with Leclerc unable to get past Bottas despite applying consistent pressure in the closing stages.

Leclerc was asked about Vettel’s defiance after the race.

“I will always trust the team,” he said. “But I need to speak with them to know the situation better.

“For sure he did a great start, but as it has been said on the radio — I don’t know whether it was broadcasted or not — but the start performance itself was exactly the same. After that I just stayed on the left to give him the slipstream.”

Speaking to the written media later in the evening, Leclerc insisted he had no reason to stop trusting Vettel going forward.

“Yeah, I think the trust doesn’t change and I think we need to trust each other, Seb and myself. I think it’s hugely important for the benefit of the team in some situation, to know that you can count on the other car and vice versa.

“So, yeah, I think it’s very important, but yes, the trust is still here. “

Vettel suggested a different viewpoint on what had been agreed before the race.

“I don’t know what happened,” Vettel said. “I think we had an agreement, I spoke with Charles before the race and I think it was quite clear. Maybe I missed something. I’m sure we’ll talk about it.”

When asked what was agreed between them, Vettel said: “I don’t know if I want to share. Not a great deal.

“I don’t want to put the team in a bad position afterwards because someone said something here and there. It’s not a big deal. I was in third and Charles was in first, we had to get past Lewis. I had a very good start and there were a couple of options on the table. Sorry but I really prefer not to.”

“Obviously looking at the past races in Russia, we know that it is important to be ahead at the first lap, because normally if you start first, you may finish first,” he said. “As a team, obviously the victory was key, so we decided that the most important thing for us was to be first and second at the first lap, because by being first and second, we would have somehow control and manage the pace and control the positions, which is what was happening.

Being first and second was the key objective. How can you do that when you start first and third, and certainly protecting the first position but as well make sure that you gain a position being second, we agreed together that the best way was not to give any slipstream to Hamilton at first, because giving a slipstream to Hamilton would give him some advantage, at least some possibility [to overtake]. And therefore Charles would give the slipstream to Seb, that was what we agreed and discussed.

“But by giving the slipstream to Seb and not giving the position, it would give an advantage to Seb which later on in the race we could give back by swapping the cars. So that was the deal. What happened I think exactly as I explained, we got a good start, both drivers, they both had very similar starts, we were on the Soft tyres, we got a good speed, Charles stayed on the left, Sebastian jumped initially Hamilton and very soon was in the slipstream, naturally I would say in the slipstream of Charles.”

He added: “Our judgement that the start went as planned, and therefore we thought it was right to ask Seb to swap the positions. Eventually the two drivers may have different opinions by driving the car, but that is something which we may discuss with them.”