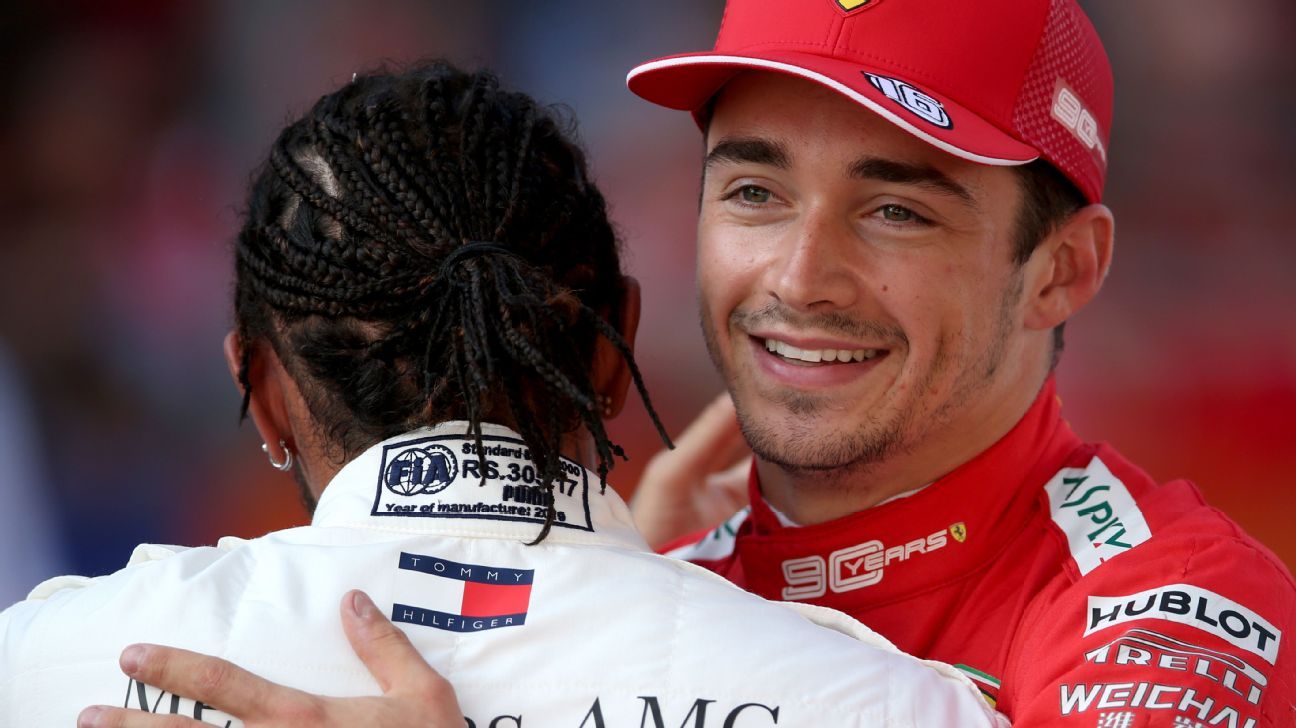 Charles Leclerc is on quite a run at the moment.

The Monaco native looks unbeatable on Saturdays and claimed another pole position ahead of the Russian Grand Prix. Our round-up of all things good and bad in qualifying must start with the grid’s in-form driver.

Early in Sebastian Vettel’s career the German was dubbed “Baby Schumi”, a direct comparison to his boyhood hero Michael Schumacher. But recently his Ferrari teammate has looked a bit like that, with another flawless qualifying session to qualify comfortably clear of his nearest rival — he’s beaten Vettel in qualifying at the last nine attempts.

He now has four straight pole positions and would have been going in to tomorrow’s race aiming for a fourth consecutive win had he not been placed on a losing strategy while leading the Singapore Grand Prix last weekend.

The last time Ferrari claimed four consecutive pole positions was when Schumacher did it in the final four races of the 2000 season — when Leclerc was just three years old.

Leclerc brushed off the Schumacher statistic when it was put to him after qualifying, saying: “It definitely feels very special but I don’t really want to think about those stats for now, I just want to focus on the job.”

He went on to add: “Of course I feel confident going in qualifying but at the end at one point it’s going to end so whether it’s now or later I don’t know. The only thing I’m trying to do is focus on myself, do exactly the same procedure as I had the last four races. I definitely don’t go to the car thinking it will come together alone.”

On the topic of Schumacher, on that occasion he went on to add three more for good measure to open up the 2001 season. Given the supreme form Leclerc is in right now, you wouldn’t bet against him reaching seven straight before the end of this year.

Not long ago it was commonplace for people in F1 to attribute any step forward Mercedes made in qualifying to what Lewis Hamilton once dubbed its “party mode” — an engine setting reserved solely for qualifying. It used to be difficult for rivals to get close to Mercedes in qualifying trim when the party mode was in its pomp, but the world champions have not had things their own way in the second half of this season at all.

Ferrari clearly now holds the power advantage and Hamilton was quick to reference that after qualifying — despite a stellar lap to snatch a place on the front row, he was still nearly 0.4s off Leclerc, which is a country mile in F1 qualifying terms.

“It was a tough qualifying session because these guys have some crazy speeds on the straight,” Hamilton said after the session. “They go to another level. That old party mode you talk about, they have something else beyond that – jet mode!”

The power advantage was clear to see; Mercedes estimates it is losing around 0.8s on the straights. Mercedes boss Toto Wolff admitted Mercedes will not be able to overhaul Ferrari’s engine any time soon.

“You’ve just got to acknowledge that there is a certain gap that is almost uncatchable,” he said. “But we have just got to do a good job of putting a good chassis on the track and understanding the tyres and running the right race strategy.

“You can see in the last three races we had a really good strategy even though we had a speed deficit on Saturday. But clearly with their power unit performance we shouldn’t be expecting to dominate the coming weekends.

Talking of strategy, Mercedes has at least given itself the chance to do something different on Sunday…

F1’s rules state that any driver who progresses through to Q3 will start the race on the set of tyres he used for his fastest Q2 lap.

While Ferrari played safe with its drivers on the soft tyres, Mercedes did the opposite, with Hamilton and Bottas setting their headline Q2 times on the yellow-striped tyre. That will offer less grip off the line and in the early stages of the race, but as a harder and more durable compound it should go longer into the race, offering Mercedes a chance to do something different on strategy to put pressure on the red cars.

Hamilton was quick to praise Mercedes for putting itself in that position and admitted getting into the slipstream of a Ferrari would be key for the run down to the first corner.

“We know they’re on a slightly lower drag level this weekend, and, of course, they’ve got that power, so we had to try something,” Hamilton said. “We’ve seen in the last couple of races that we’ve been behind kind of all the way.

“We’re fortunate that we could go for another strategy and I think the team has done a great job by putting is in that position. It’s a long way down to Turn !, I think this is probably not the best track for starts on the harder tyre, but I’m going to try and tow the life out of Charles going into Turn One, but it’s going to be hard, because they’ve got good starts as well.”

Whatever happens, Mercedes’ decision will keep the first half of the race very interesting indeed.

Seeing what you want to see…

After qualifying, Sebastian Vettel insisted he sees no pattern in his qualifying defeat to Leclerc — it was his ninth in a row against his young teammate.

“Obviously in quali here and there we didn’t have the best sessions on my side,” Vettel said. “I think obviously today Charles was faster, pretty easy to see where he was faster, it’s a little bit here and there, I don’t think there’s any pattern standing out saying he’s faster in the same type of corner.

“I think the last races were closer than it showed on result. So we will see what happens tomorrow. Usually, come race day, I’m getting more and more confident in the car and have had the pace has never been a problem in the race so we’ll see what happens.”

Vettel recorded a morale-boosting win at the Singapore GP but even he would admit the circumstances were fortuitous, given how he ended up on the winning strategy while Leclerc had claimed pole and led the early stages of the race. It’s been a while since the four-time world champion beat Leclerc on merit and doing so from third on the grid on Sunday would be a proper indication that the German driver is still able to compete on the same level.

There’s a lot of attention on Alexander Albon right now. His step up to Red Bull had, until Saturday afternoon, been pretty solid — although he had been off Max Verstappen’s pace he had looked solid, collecting the sort of points finishes Pierre Gasly had consistently struggled to do before his demotion.

Albon suffered his first major setback for Red Bull in qualifying, spinning off in Q1 and crashing into the Turn 13 barriers. The Thai driver had lost the rear of the car while turning in to the right-hander.

“I just went in a bit hot,” Albon explained after the session. “When these cars go, they go quite quick. So just frustrating. There is a tail wind there, and it just caught me out really.”

It means he will start at the rear end of the grid, albeit on a circuit where overtaking is possible. A mistake in F1 is always scrutinised, but given that we know Red Bull is making a straight choice between himself and Pierre Gasly for the 2020 seat it was an unfortunate moment.

Albon should have equity in the bank from the stellar start to his rookie season and the way he handled the first three races after the switch, but his mistake is a reminder that Red Bull has two unpolished talents to pick from to partner Verstappen next season.