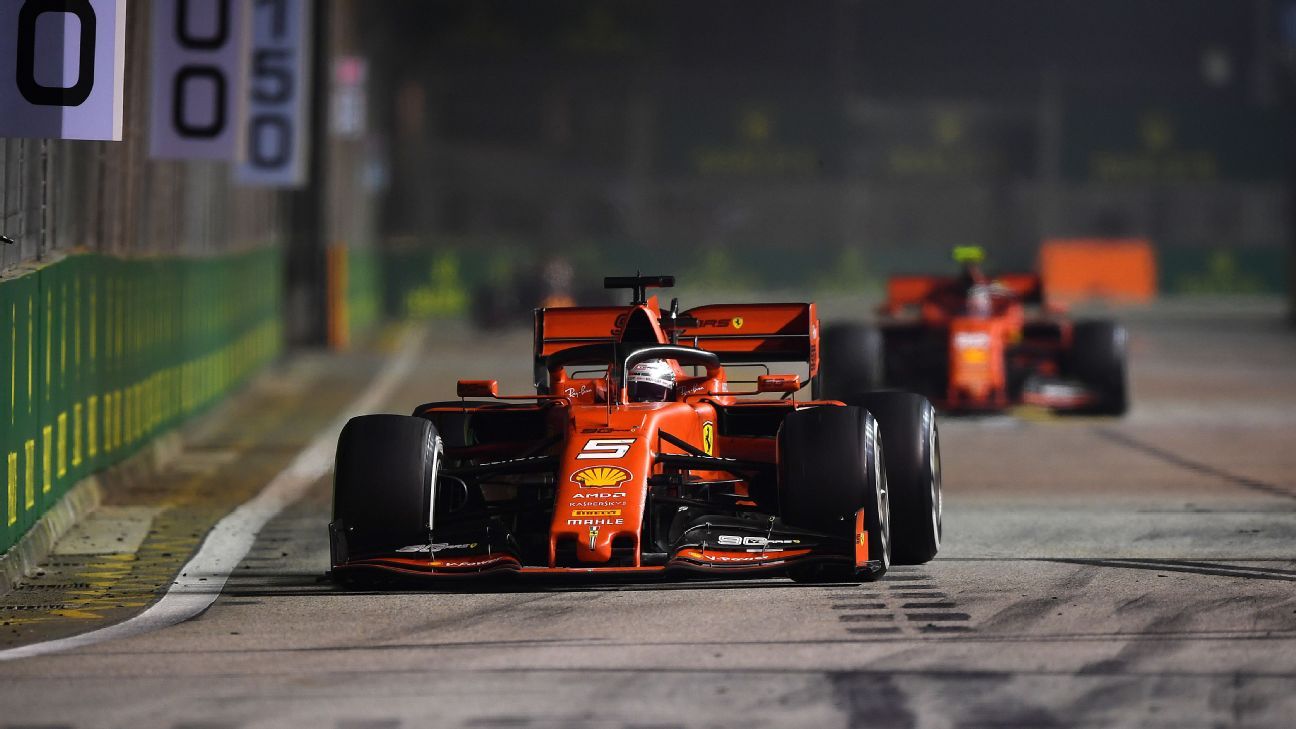 SINGAPORE — Ferrari has secured pole position and victory at all three races since Formula One returned from its summer break. If the world championship had been zeroed ahead of the Belgian Grand Prix at the start of this month, Ferrari would lead Mercedes by 20 points in the constructors’ standings and Charles Leclerc would lead Lewis Hamilton by 22 points in the drivers’.

Of course, that stat is of little consequence for the actual 2019 world championship, in which Hamilton extended his lead to a mammoth 65 points in Singapore and Mercedes is still cruising to an early constructors’ victory with a comfortable 133-point advantage over Ferrari.

But could the last three races be a sign of a shift in the competitive picture going forward? Has Ferrari finally cracked the latest set of aero regulations? Put simply, is Ferrari’s resurgence genuine?

As soon as the Australia-spec aero package was signed off in Ferrari’s wind tunnel over the winter, the team was destined to struggle this year. The overall balance between drag and downforce was skewed too much towards minimising drag, and with it the car had clear issues putting enough load in the tyres to get them working at low-energy circuits. It wasn’t a dog of a car by any means, but compared to rivals Mercedes it had some severe limitations that would be exposed at the majority of circuits on the calendar.

However, there would also be some tracks where Ferrari would have the edge over the competition. At circuits where wings were trimmed back to maximise straight-line speed, the SF90 would have an inherent advantage, and so, with the help of the most powerful engine on the grid, Ferrari had the fastest car in Bahrain, Azerbaijan and Canada in the first half of the season. However, costly mistakes at the all three rounds meant possible victories went missing.

In the meantime, the team was working hard at piling more downforce onto the car without upsetting the overall aerodynamic balance. A new aero package in France failed to offer a breakthrough many outside the team had hoped for, but gave Maranello a more fruitful development path to follow. There was reason for optimism, but the spectre of a win-less season was looming and that increased pressure on the team.

Some of that pressure was lifted at Spa-Francorchamps and Monza when Leclerc secured Ferrari’s first two victories of 2019. They didn’t come easily — Leclerc had to fight hard to hold off Hamilton at both races — but finally Ferrari took advantage of its car’s strengths to make up for lost victories earlier in the year. The only downside was that Spa and Monza were the last low-downforce circuits of the year and next up was Singapore — a race where downforce and tyre management are key. Ferrari was expected to come back down to earth with a bang.

Why was the Ferrari so quick in Singapore?

Singapore is an unusual track with more corners than any other on the calendar — the majority of which are slow- and medium-speed. The hard acceleration out of slow-speed corners can overheat the rear tyres and it is easy for the grip levels between the front and rear axles to become unbalanced. If that happens, lap time can quickly leak away and over a lap of one minute 36 seconds, it’s not unusual for a driver struggling with balance to slip a second off the pace.

That’s exactly what happened to Sebastian Vettel and Leclerc when they first took to the track during Friday practice. The front of the car wasn’t offering the positive turn-in they needed to hook up a quick lap and the rear was loose on the exit of corners. The Ferrari was the best part of a second off the pace of Hamilton’s Mercedes over a single lap, and even more than that with fuel in the car to simulate race conditions.

This was familiar territory for Ferrari. Owing to the inherent weaknesses in the car’s aero concept, a lack of front-end downforce has been a problem all year. But an update package in Singapore appeared to offer more tools to find a solution. Additional front-end downforce was loaded onto the car ahead of final practice on Saturday and suddenly the front tyres came alive.

Yet team principal Mattia Binotto was keen to play down the impact of the upgrade alone as the defining factor — it was more about focusing on how to get the most from the tyres over a single lap.

“The aero upgrades have been a step forward, but that cannot explain all of what we have seen,” he said. “I think Singapore is still a very specific circuit, the drivers make the difference in their confidence, and the car balance has improved in the last races. The tyres as well, it was a different type of compounds compared to other races, and probably we made them work.”

The compounds used in Singapore (the three softest in Pirelli’s range – C3, C4 and C5) won’t make another return until the final race in Abu Dhabi and at the intervening rounds in Russia, Japan, Mexico, the U.S.A. and Brazil harder compounds will be used. Failing to get those harder compounds to work has been an ever-present theme of Ferrari’s season and there’s a sense that, perhaps, Singapore was a one off…

A breakthrough for Ferrari or a missed opportunity for Mercedes?

Key to Ferrari’s weekend was securing pole position, and it appears the team did everything with its setup to focus on that single lap when it mattered on Saturday evening. The SF90’s powerful engine meant the team could ratchet up downforce levels without sacrificing too much speed on the straights. The car was still the fastest in the high-speed sector one in qualifying after the setup tweaks, but it was then able to match Mercedes in sectors two and three where it had been missing tenths of a second in Friday practice.

Combined with getting the tyres in the right window on the outlap — while the two Mercedes drivers fought between themselves for track position, compromising Bottas significantly — Ferrari had the pace for Leclerc to take pole, and from pole Ferrari could control the race.

“I think this is not about upgrades, I think this is about getting the best out of your package,” Mercedes team principal Toto Wolff said when asked how concerned he was by Ferrari’s return to form. “They have a tremendously powerful engine, which is an important ingredient that maybe allows you more strategic choices on setup. But this is no excuse.”

The lap times at the start of the race — which were a massive 13 seconds off Leclerc’s pole time — indicated that Ferrari was not comfortable pushing on heavy fuel. But because following another car and overtaking is so difficult in Singapore, it didn’t matter. Hamilton was stuck in second and even if he had a faster car underneath him, he wasn’t in a position to pass Leclerc.

By lapping off the pace, Leclerc was also tactically keeping the midfield cars from positions seventh to tenth in the pit window of Mercedes and Red Bull. That lessened the incentive for Ferrari’s rivals to attempt the undercut that ultimately worked so well for Vettel. Mercedes felt it had the faster race car, but Ferrari’s strategy pinned the team in a corner and ultimately it forced it into making the wrong calls from the pit wall.

“Obviously, with the expectations we set for ourselves, fourth and fifth is disappointing,” Wolff said. “We didn’t optimise what we could have optimised and I think the main missed opportunity was qualifying. This is what is the most decisive in Singapore.”

The real challenge lies ahead

Nevertheless, after three wins in a row across two very distinct downforce levels, Binotto was cautiously optimistic about the upcoming rounds. Ferrari have clearly made progress and even if some of the idiosyncrasies of racing in Singapore helped mask the car’s underlying weaknesses compared to Mercedes, it was still a huge win.

“If I look at the first half of the season, there were races where we could have won and we were performing well, so there is no reason why we cannot do it at the following races,” he said. “On top of that, the car has improved, so eventually there are more races where we can be fast. But I’m pretty sure that our competitors will be strong at some circuits, sometimes they will be faster, but for the third time [in a row] we have been faster.”

The upcoming races will be the true test of Ferrari’s resurgence. Continue to feature at the front of the grid and there will be reason for genuine excitement at Maranello, but lapse back into a negative spiral of limited downforce and tyre trouble, and the size of the true challenge will become clear once more.

“The bits we brought here obviously are positive in terms of also looking to next year’s direction and development,” Vettel said on Sunday evening. “But we need more, obviously we want to be the best team, which currently we are not.

“The last races have been good for us so that’s great for our self-confidence inside the team for everyone, but there’s still a lot of work ahead of us.”

Ferrari should take great pride in how it won the race in Singapore. In a year when strategy errors and mistakes have proved costly, the Italian team nailed its weekend and out-raced Mercedes. That alone is promising and a sign of better things to come, even if the jury is still out on the overall competitiveness of its car.