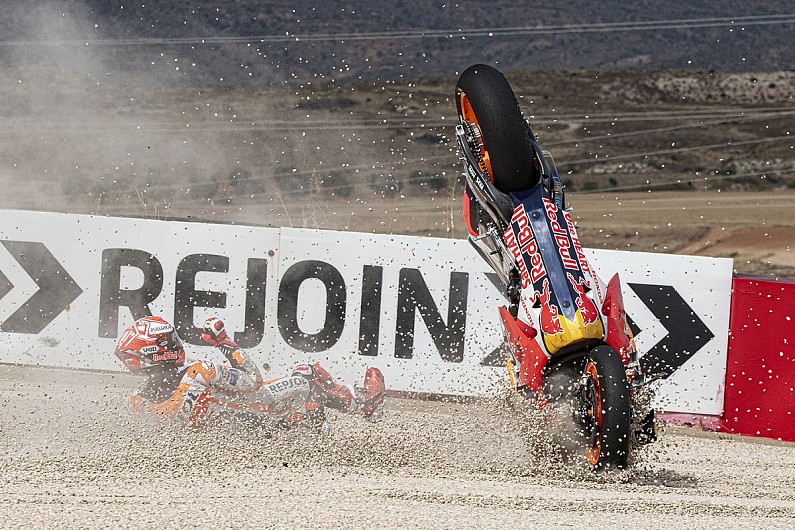 Marc Marquez admits he knew there was a “very big chance” he’d crash in MotoGP Aragon Grand Prix free practice, as he had to discover the hard front tyre’s limits.

The Honda rider dominated Friday’s running with a lap of 1m46.869s set in FP1, which put him over a second clear of the field on the combined timesheets, but suffered a low-speed crash at Turn 8 in FP2.

Rain is forecast for Saturday, but the race should be run in conditions similar to those experienced in second practice, with Marquez keen to explore what front tyre option would be viable for Sunday.

He revealed afterwards he knew there was a high chance he would crash as he would “rather take some risks” when exploring the tyre options to see if there was “some warnings” from it.

“The team and I knew that I will have a very big chance to crash in the afternoon,” he said.

“Why? Because I tried the hard front tyre. Looks like Sunday conditions will be similar to today, so I said to the team I’d rather take some risks this afternoon and if we have some warnings, I prefer to have [them] this afternoon than on Sunday.

“And that’s what I did. First run I went out on the hard front tyre was ok. Then in the second run on the downhill [braking in Turn 8] I lose the front.

“With the hard front you have a little less grip on the edge, and then I touched a little bit the white line and I lost the front.

“But it’s what I say to the team: I prefer to have this warning this afternoon than in the race. 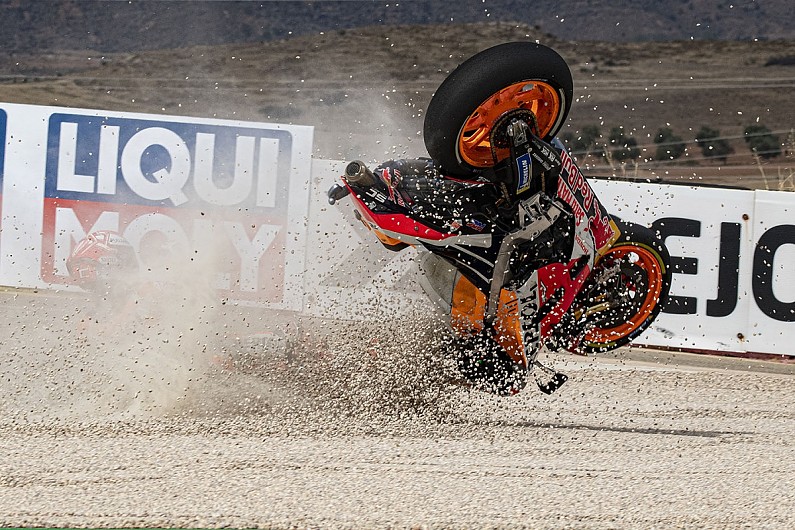 Marquez says he was forced into this method because he was “on the limit” with the hard front in the cooler FP1 and needed to know where the “temperature limit” was, as it also did not work during the scorching Misano weekend.

“We tried [the hard front] because in FP1 I had some graining with the medium,” he added.

“But in the last run I tried the medium again and the graining was not so bad.

“Just we were on the limit with that hard tyre.

“Also, we had the option to use it at Misano, and in Misano it was very hot, but it was not working [properly].

“And here [at Aragon] it looks like [there] is better grip on the track, but also less temperature.

“So we were on the limit, and we were trying to understand where was the limit and we understand that [the heat in FP2] was the temperature limit.

“If it’s colder we cannot use.”