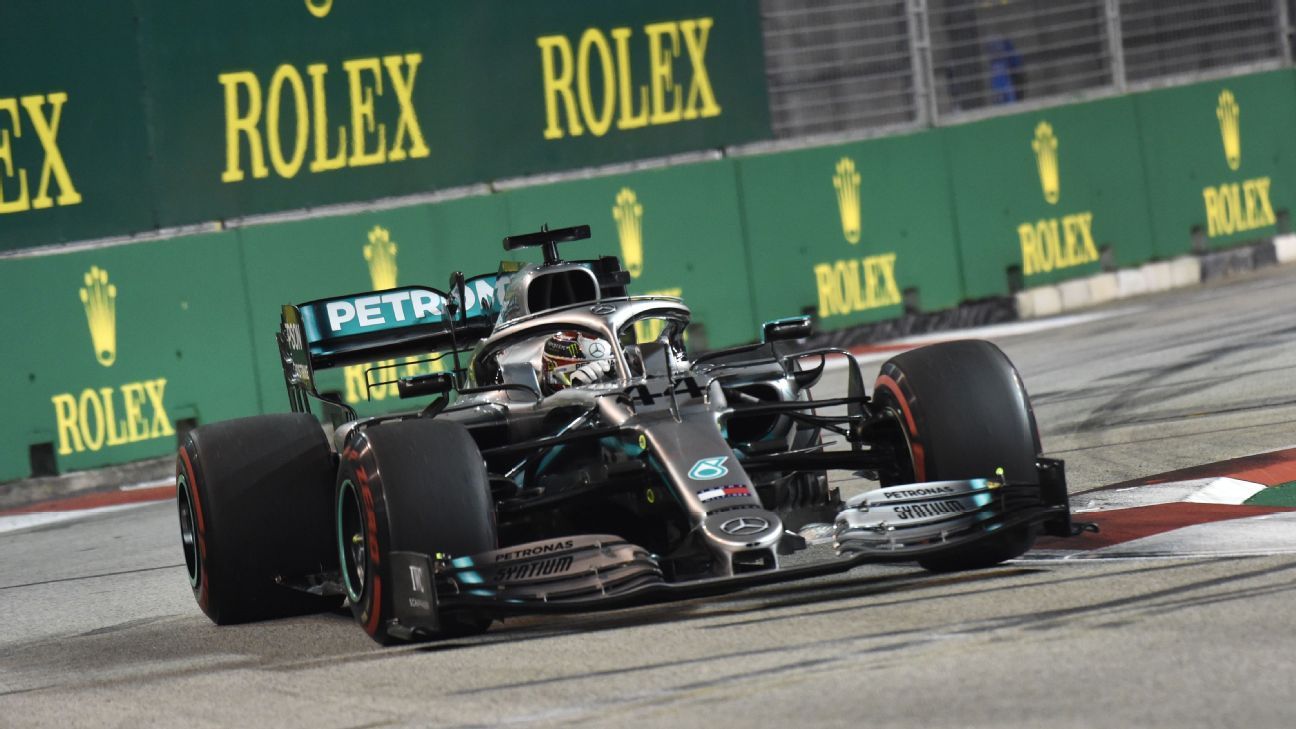 SINGAPORE — After two close battles with Charles Leclerc at the last two races, Lewis Hamilton looks set to lock horns with Red Bull’s Max Verstappen in Singapore. The nature of the circuit, which includes mostly medium and low speed corners, plays to the strengths of the Mercedes and Red Bull while exposing the weakness of the Ferrari.

That much was clear from the time sheets on Friday evening. Hamilton led Verstappen by 0.184s, with Ferrari’s Sebastian Vettel 0.818s off the pace in third. Verstappen was actually faster than Hamilton through the first two sectors of the lap and lost all of his time to the Mercedes in the final sector where he came across traffic.

“I had three or four cars to get by so that is why my last sector was not good,” he said after the session. “I only improved around two tenths compared to my hard tyre [lap], so I think we look very strong but of course also Lewis looks very strong.”

Hamilton’s lap featured no major hold ups from traffic and looked like a joy to drive as he carried significant speed through all 23 apexes and made few corrections on the corner exits. As always, there will be more time to find ahead of qualifying, but in terms of baseline setup, Hamilton seems to have hit the sweetspot in Singapore.

“I was really happy,” he said. “I felt much better in the car today than I have for a while. I hope that stays over the whole of the weekend. But I think they redid a few patches, a few bits of tarmacs on the circuit, the tyres are working well.

“If you can get into a groove over here then it’s such a beautiful lap. I really enjoyed it.

“We’ve definitely got some areas we need to improve, which is always good, and nothing is ever perfect. So I’ve got to go and kind of study areas we can improve on the car but areas also I could improve, some of the areas like braking and turn-in points, etc…”

Last year, Hamilton and Verstappen were the stars of qualifying, lining up together on the front row. Although Hamilton’s lap received the plaudits, Verstappen’s lap was arguably the better of the two given the relative performance of the two cars. This year he has a more competitive package underneath him and a chance to prove just how fast he is at one of the most challenging circuits on the F1 calendar.

Is Ferrari in the fight?

It was clear from onboard footage that the Ferrari is not quite on the same level as the Mercedes and Red Bull this weekend. The front end doesn’t look as sharp on turn-in and the rear twitches more often under power. Both Vettel and Leclerc encountered traffic on their lap, but it’s clear there is plenty of work to do to close the 0.8s gap to the front in time for qualifying.

“[It was the car’s] balance,” Vettel said when asked where he was losing time. “Just to distribute the grip a bit differently, I’m suffering a bit with the front, then on long runs everything was getting a bit too hot and sliding a bit too much.

“Obviously our laps on the short run were not very clean because we got traffic I think both of us, so not great to judge, but overall I think we can fine tune the balance, improve the car, and then we’ll see what comes.”

In the first sector of the lap the Ferrari was actually the fastest car of all — largely down to the long straight between Turns 5 and 7. Vettel’s advantage over Hamilton in the first third of the lap was as much as 0.262s, but more than double that leaked away in the second sector before a further 0.374s was lost in sector three.

Both Mercedes’ Valtteri Bottas and Red Bull’s Alex Albon were around a second off the pace of their teammates in second practice. Part of that was down to crashes for both drivers — Bottas buried his Mercedes in the barriers in first practice and Albon lost his front wing after a mistake in second practice.

“In second practice I’m not really sure what was going on,” Bottas said. “I was lacking pace every single run, every tyre compound, so I’m not quite sure if everything was right in the car. We need to have a look. It felt like I couldn’t go any quicker, but I was one second off the pace. A bit tricky.

“The only thing I could really feel was quite a bit of friction in the steering system, so I struggled to feel the car properly. We’ll look at everything for sure, but I doubt everything was 100 percent. Obviously need to have a look at what I can do better as well.”

Albon, who was making his Singapore debut on Friday, believes there is more to come.

“It was ok,” he said. “I was just getting used to it. I took it easy today, but not a terrible lap. I’m still getting there. I think the car is good but there is homework to do and we will see tomorrow.”

A look at the long-run pace from Friday evening tends to back up the order over the low-fuel laps. Mercedes looked fastest of all, but only in the hands of Hamilton. His average lap time over a ten-lap run on soft tyres was 1:45.027 compared to Verstappen’s eight-lap average of 1:45.869. Long runs always have the potential to be skewed by differing fuel loads — and traffic — but it would tally with what we know about the two cars this year that Mercedes holds an advantage.

However, Hamilton’s advantage is unlikely to be enough to beat Verstappen on pure pace if he starts behind the Red Bull on the grid and remains behind it coming out of the first corner. That puts extra pressure on Verstappen to perform on Saturday, but if anyone can handle it, it’s him.

Ferrari looks a long way adrift on long-run pace, which is largely down to keeping the rear tyres in check. Although Sunday’s race is likely to be a one-stop, rear tyre management is still key and Ferrari’s lack of traction has the potential to be quite damaging to its race pace.

So bad was Ferrari’s long-run pace on Friday evening that it was closer to the midfield teams than the top three, with Toro Rosso emerging as a surprise package at the front of the midfield pack. Renault also look competitive, while Haas could be in for their worst performance of the year with pace that was in Williams’ territory.

On the basis of Friday, it should be a straight fight between Hamilton and Verstappen for the win. As far as two-horse races go, they don’t get much better than that.